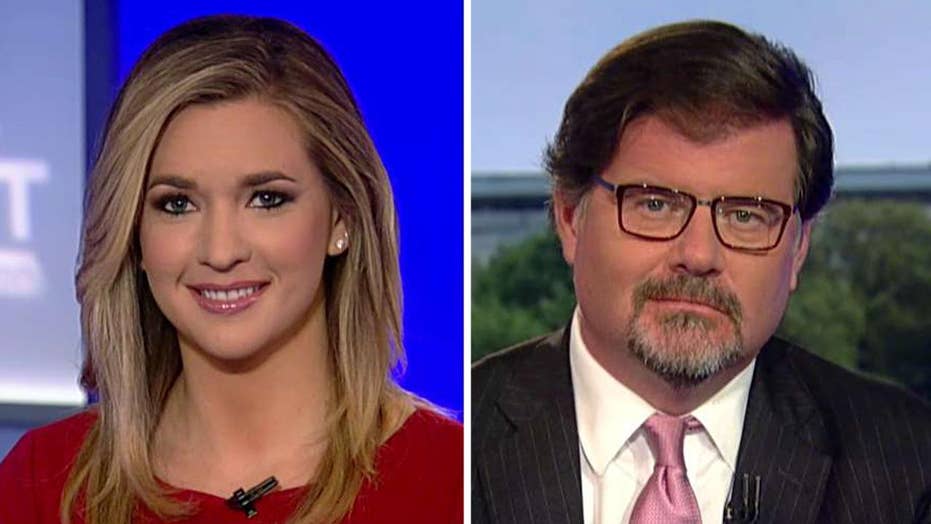 Military program for immigrants under review

This is a rush transcript from "Special Report with Bret Baier," August 1, 2017. This copy may not be in its final form and may be updated.

REP. RUBEN GALLEGO, D-ARIZ.: Talking about what's the best military in the world. We want to continue to have the best military officer corps. We should at least explore the possibility of this population being part of that potential recruitment in the future.

REP. STEVEN RUSSELL, R-OKLA.: With the MANVI program where it's supposed to meet some of the vital national interests, the program has been replete with problems to include foreign infiltration, so much so that the Department of Defense is seeking to suspend the program due to those concerns. And I can't really discuss some of that here in the setting, but there are some major issues when it comes to vetting.

BRET BAIER, ANCHOR: James Rosen with the exclusive report at the top of the show. Since 2009 the defense department of been moving in some 10,000 foreigners into a program called the Military Accessions Vital to National Interests, or MANVI, as you just heard right there. In exchange for service, these foreigners selected for language or other needs skills can receive an expedited path to U.S. citizenship.

The problem is that we are just hearing that there is foreign infiltration in the program, and there are some number of these enrollees who are now unaccounted for in this country. And that is creating a national security concern.

Let's bring in the panel: Katie Pavlich, news editor at Townhall.com; Jonah Goldberg, senior editor of National Review, and here at the White House with me, Shannon Pettypiece, White House correspondent for Bloomberg News. Shannon, I'll start with you. I had Kellyanne Conway out here. The reason I didn't ask her about it is beforehand we prepped her about the story and they said they just didn't have anything. And they were looking for any information on it. It is of concern security-wise.

SHANNON PETTYPIECE, BLOOMBERG NEWS: Right, and my sense too talking to people at the White House that they really hadn't heard about this yet. I'm sure they have now that your story has broke, but this was not something on the White House's radar. And of course there is a security concern, but there is also a personnel concern here too because this program was really created to help the Department of Defense fill positions they had trouble filling with people who speak a language like Mandarin or Arabic that they have trouble finding U.S. citizens who speak that language or who have the special skills that they need. So thousands of people have actually been through this program, and it's something that Defense Department depends on, but obviously, yes they saw your reporting, it sounds like it something they are taking closer look on to make sure they are handling all that appropriately.

KATIE PAVLICH, TOWNHALL.COM: Like many government programs, unfortunately it seems like this got caught up in bureaucracy and there were too many people put into the program too quickly, and oversight and vetting went out the window in some of these cases.

And one of the most important things here, as you mentioned, as James mentioned in his story, is that some of these foreign nationals who are trying to get citizenship who maybe didn't receive security clearances are now missing throughout the country, and that is of national security concern.

I do think it's a good thing the defense Department, unlike many government agencies in Washington, wants to put a halt to the program. They have suspended it, and I hope that they can figure out the problem, go back to vetting fewer people more thoroughly because, as we've talked about, a lot of these positions are vital to the national security interests of the United States in terms of translators, people who can go into special operations overseas and blend in and get us vital intelligence. So DOD is looking at it, and it certainly is a concern.

BAIER: And let's just point out, Jonah, that we know that the inspector general at the Pentagon has investigated this. And obviously it's a concern about who is trying to get citizenship from all these different countries, some of them dangerous countries. Here's our own Jack Keane.

GEN. JACK KEANE, FOX NEWS MILITARY ANALYST: ISIS has always had the desire to use migration as a way to penetrate into countries. They have done that successfully in Europe because of open borders, mass immigration with no vetting. In the United States we haven't had any record of their penetration, and certainly if this program is compromised and there's a possibility of that kind of penetration, it's got to be thoroughly investigated.

JONAH GOLDBERG, NATIONAL REVIEW: Yes. It just seems like we have a lot more to learn about this. It's seems to me it's a good program. It also seems to me that if you can't run the program without vetting and screening out terrorists, then you can't have the program. It's a no-brainer in that regard. This feels like a scene or a plotline out of "24" or some TV show.

We also don't know if some of these guys, it's called skipped bail, whether are they like people who are just skipping on their visa and they have no terrorist ties. We need to find out a lot more. I think that there's a good argument to use people from some of these countries because they have native language skills and native intelligence about how to work in those countries. So other than that, we've just got to find out more. It could be a big deal.

BAIER: And we will. James Rosen is on top of this, broke the story at the top of the show. We will stay on it. We wanted to talk about it here.