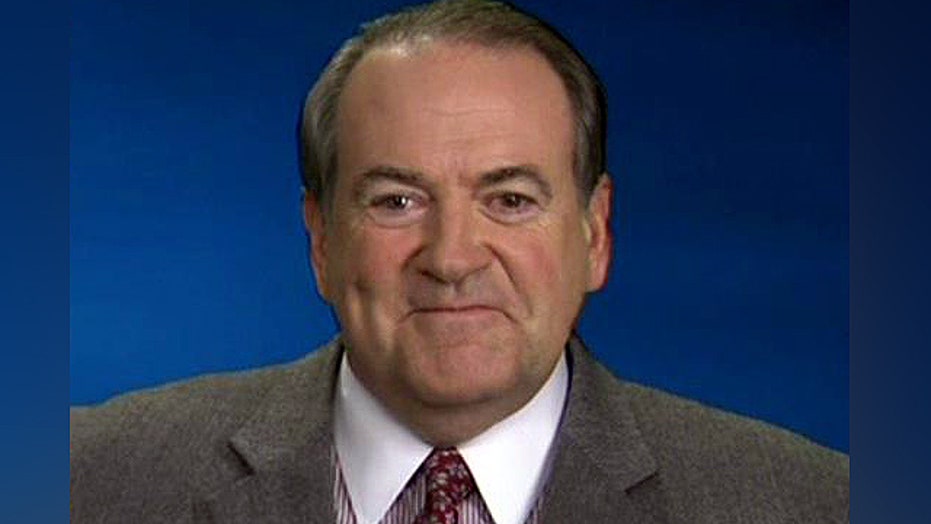 Mike Huckabee reacts to criticism of comments on women

Huckabee caught in a political firestorm over remarks

This is a rush transcript from "The Kelly File," January 24, 2014. This copy may not be in its final form and may be updated.

Governor, good to see you.

So, we've shown the viewers the firestorm that erupted and the criticisms of you. So, let me get right to you, and ask you directly. Are you suggesting -- are you suggesting that women who use birth control cannot control their libidos?

HUCKABEE: Of course not. In fact, everything I was accused of saying I was actually saying the polar opposite. This was an affirmation of the intelligence and capability of women.

I've been married 40 years to a very strong woman, a wonderful person who can do things I can't do. She is smart, she's capable, she doesn't need someone to prop her up, because like my wife, my daughter, my daughter in law, I'm insulted for them. And they're insulted when the Democrats portray them as victims of their gender.

And so, it wasn't even about contraceptives. It was about the way that Democrats have accused Republicans of having a war on women, when Republicans believe that women are quite our equal. We don't think that it's somehow going to be necessary for them to have a government subsidy and government support or they're not going to be able to make it.

KELLY: OK, but this is where some women and others have taken issue with you. That the Democrats would say they don't view women as the victims of their gender, they view them as living, functioning human beings who have a reproductive system, and the ones who have to carry the babies, and therefore, and by the way, sexual beings, and therefore, to be responsible when having sexual relations they need birth control. Even if they are having -- even if they're not having sexual relations for the purpose of enjoyment, then they might need birth control because they have a health issue, they have a medical issue. And it's not about seeing women as victims, it's about getting them the medical coverage they need.

HUCKABEE: And, Megyn, to that point, I'm not opposed to women having contraceptives or birth control, at least they are abortifacients. And then I don't want to pay for them out of my tax dollars --

HUCKABEE: -- because I think that that is morally repugnant. I signed, in fact, a bill in 2005 when I was a governor that include contraceptives as part of the state plan. So, I'm not opposed to women having access to it. I'm opposed to Democrats treating women as though they are somehow incapable of being able to function unless the Democrats and particularly the government comes in to rescue them.

And if people listen to what I said -- which, by the way, Megyn, it was exactly what I said, exact words I said on my television show a week ago.

KELLY: Well -- the words were a little different from a week ago. What you said on the radio wasn't controversial. I think you admit you said it a little better on the radio show than you said at the RNC meeting. Do you not admit that?

HUCKABEE: I still used the word "libido" because I don't think anything is wrong with that. Men have it, women have it.

KELLY: You put it in the terms of control, that the Democrats believe that women need the government in order to control their libidos. And that sounded to many like you were placing a judgment on it, like -- first of all, you acknowledge the vast majority of people, of adults in this country, have libidos and act on them, and that the vast majority of people use birth control when they do not desire to have a baby as a result of those libido instincts, correct?

KELLY: And are you casting any judgment on that?

KELLY: The use of birth control, by couples have intercourse, who are not looking to have a baby.

HUCKABEE: No, and I didn't say that.

My pushback is not about contraceptives. The comment wasn't about it. It was about Democrats and this phony war on women that they pretended Republicans have.

KELLY: I'm going to floor, give it all to you.

There are all sorts of reasons why women take birth control and there's no reason that they shouldn't be able to get it from their employers. That's what they say. And they say it's not the government paying for it, it's the women paying for it when they pay their premiums under their policies.

So they take issue with you characterizing it as Uncle Sugar having to step in and control their libidos.

HUCKABEE: No, and I didn't say that Uncle Sugar, which, by the way, is a Southern term. A lot of people have said, where did that come from?

KELLY: I wondered of that, too.

HUCKABEE: If they had grown up in the South, they would have known that Uncle Sugar is the combination of Uncle Sam and a Sugar Daddy, and it's a long-time Southern expression.

KELLY: I mean, I figured it out eventually.

HUCKABEE: It's a colorful way to live and talk in the South. So, the idea that somehow I was disparaging women is the polar opposite. That's what so ridiculous about some of these tweets.

But, look, this is a serious issue that ought to have thoughtful discussion. It cannot be reduced to 140 characters, which is unfortunately I think what happened yesterday. A couple of reporters trying to reduced this entire issue to a tweet. They got it wrong. They later came back and corrected it, but by then the firestorm had started.

But if people will listen carefully in context -- now if they parse every word -- they can believe what they want to believe, can hear what they want to hear. What I was going to say before, to somehow characterize it, I was taking offense to women is the opposite, I was elevating and affirming that women are quite capable, as equals to men.

It's why, Megyn, when I was governor, I appointed more women to executive level positions of state governor than any other governor in our state's history, including Bill Clinton. So, you know, I'm not having to apologize to anybody for the record I have on women's issues, and I certainly don't need to say that, oh, well, I'm so sorry that I actually believe that women are equal to men and that are capable and strong.

But I think people are missing the entire point. The point was not about that issue. It was about how Democrats have accused Republicans of having a war on women. And I pushed back on that.

And I will continue to push back on it because I don't think Republicans are having a war on women.

KELLY: And have reduced women to being about all of that one issue. We heard a lot of that in the last campaign. Understood.

Governor, great to see you, sir.

HUCKABEE: Thank you, Megyn. Appreciate it.