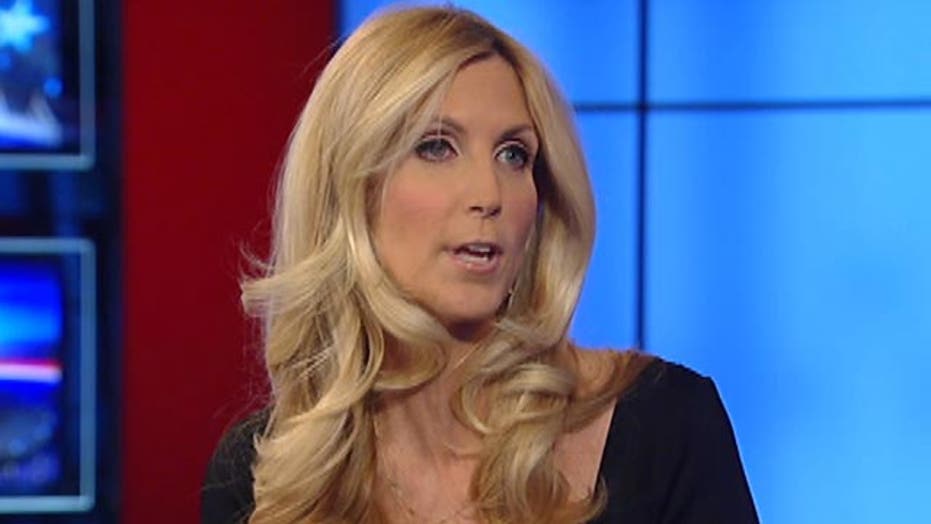 Is it time for the mainstream media to start telling the truth?

This is a rush transcript from "Hannity," December 16, 2013. This copy may not be in its final form and may be updated.

SEAN HANNITY, HOST: There are new developments regarding the gunman responsible for Friday's school shooting in Colorado. Now, although the mainstream media was hesitant to admit it, 18-year-old Karl Pierson reportedly held strong left-wing political beliefs. According to classmates, he was a committed socialist.

UNIDENTIFIED FEMALE: He was (INAUDIBLE) very proud of being a socialist. He was very outspoken on his political views.

To him, it just meant economic -- more economic equality.

HANNITY: Now, according to The Denver Post, Pierson also mocked Republicans in a Facebook post, writing, quote, "You Republicans, you're so cute." He also posted an image that read, quote, "The Republican Party, health care, let 'em die. Climate change, let 'em die. Gun violence, let 'em die." And it went on and on.

Now, sadly, Pierson is just the latest in a long line of left-wing lunatics to commit these horrific acts, even though the mainstream media has been all too eager to link them to the right without any evidence to back them up.

Now, perhaps the most memorable of all is when these so-called journalists over at ABC were out there blaming the Tea Party for the Aurora movie theater shooting. You might remember this.

UNIDENTIFIED MALE: I want to go to Brian Ross here, because Brian, you've been looking -- investigating the background of Jim Holmes, and you found something that might be significant.

HANNITY: Now, that, of course, was completely false. Now, the point is, the media needs to start telling the truth, whether they like it or not. Maybe they should start with the fact that the presence of armed guards inside the Colorado high school during the shooting on Friday was a key factor in preventing more deaths.

Here with reaction, author of "Never Trust a Liberal Over Three" -- merry Christmas. How are you?

COULTER: This proves that we should keep liberals out of schools, I think!

COULTER: I mean, the real thing that all of these shootings have in common is that it is crazy people. The problem is with the mental health law in America...

COULTER: ... which I keep talking about, and I don't know why Republicans don't bring it up. Instead of fighting defensively against liberals who want to take our guns away, how about doing something that would actually make a difference? From Jared Loughner in Arizona and the Aurora shooting and Adam Lanza, and the Virginia Tech shooting, they were all crazy people. They were known to be crazy. They should have been forced to take medication or institutionalized.

But as you point out, as long as liberals have brought up what their politics are, as I described in my book "Demonic," about mob behavior and violence on the left, the left has a 200-year history of engaging in political violence. Every single presidential assassination in the United States has -- sometimes it's just a run-of-the-mill nut. But to the extent they have been political, they are always liberals. They're communitarian...

HANNITY: There is a different...

COULTER: ... they're socialists, they're communists. There have been four members of Congress assassinated. Two were just crazy people. And the two -- the first and the last were committed by liberal nuts!

HANNITY: You know, the difference is if you go back to the Gabby Giffords -- you know, they made a big deal...

COULTER: They probably should ban metaphors!

HANNITY: Well, they -- they did that, but we find out often is the case that the people responsible for the shooting are left-wing lunatics! Except we don't blame them. We blame the mental health system. We blame the individual.

COULTER: Well, I mean, as I was the first to say and other people ripped it off, liberalism is an aspect of mental illness. So it's not surprising that to the extent any of this political violence or any assassinations are political, it is always, always, always liberals!

There has never been a right-wing assassination attempt on a president or a member of Congress, certainly not a successful one. The last one was that Jim Jones. Remember? He had the death cult down in Guyana, where they had the grape drink. Well, you know, Rosalynn Carter had appeared with Jim Jones. All these Democratic congressmen had appeared with him. He's -- liberalism is -- is -- it's on the spectrum of mental illness.

HANNITY: Here's a little bit of history. Do you know who one of the first people on the scene after that had happened was Bob Beckel.

COULTER: I did not know that.

HANNITY: ... the left will say, well, what about Tim McVeigh, a militia guy? He's not part of what we define as conservatism.

COULTER: No, it's more than that. He, like Jared Loughner, like a lot of these guys, just by the way, are big pot smokers. And any doctor will tell you that not -- a lot of people have a predisposition for schizophrenia. Marijuana is one of the things that will set that predisposition off. That connection is not a surprise, either. I mean, it doesn't mean that all schizophrenics are pot smokers.

HANNITY: No, I understand...

HANNITY: ... it's a gateway drug. I didn't know that was a contributing factor.

COULTER: Oh, absolutely. Absolutely. And often, the very first -- when -- when that's about the age when people become -- start to show the signs of schizophrenia. About 50 percent of all violence committed by schizophrenics they commit during the first psychotic break, which is why often, these guys have no other crime record.

Now, sometimes they do, like Jared Loughner, another liberal, as we know, and another pot smoker...

HANNITY: Well, we don't politicize -- I'm not blame -- just because this guy was a left-winger that hated Republicans or hated conservatives, I'm not blaming every left-winger.

COULTER: No, we're just talking about it for 10 minutes!

HANNITY: No, but the difference is, if there is -- if any one of these instances was a conservative, you know and I know they would go out there, blaming...

COULTER: No, but they do anyway!

COULTER: That's why it's worth mentioning because they're always claiming -- for example, in my second to last book, "Mugged," I have a whole chapter on all the hysteria about imaginary threats on President Obama's life. Finally, the Secret Service testifies and they say, no, actually, it's the exact same number of threats as we got for the last four presidents.

And they keep going on -- and who -- what presidents have -- who were the last assassination attempts? Ronald Reagan and two against Gerald Ford!

COULTER: By whom? Again, Manson gang and that crazy Sarah Moore, who tried to kill President Ford because she thought he was waging a war on the left in America.

HANNITY: And the Fromme girl.

COULTER: They are always, always left-wing, or they think they're, you know, King Edward of England and President Andrew Johnson owes us money.

HANNITY: We'll see you on radio tomorrow. Thanks for stopping by.

COULTER: See you on radio and...

COULTER: I think so.

COULTER: I hope so.

HANNITY: On Saturday we think at 11:00. But it'll be on my website, Hannity.com.

COULTER: A little early for me, but yes.

HANNITY: A little early. Poor Coulter has to get up before noon. All right, good to see you.