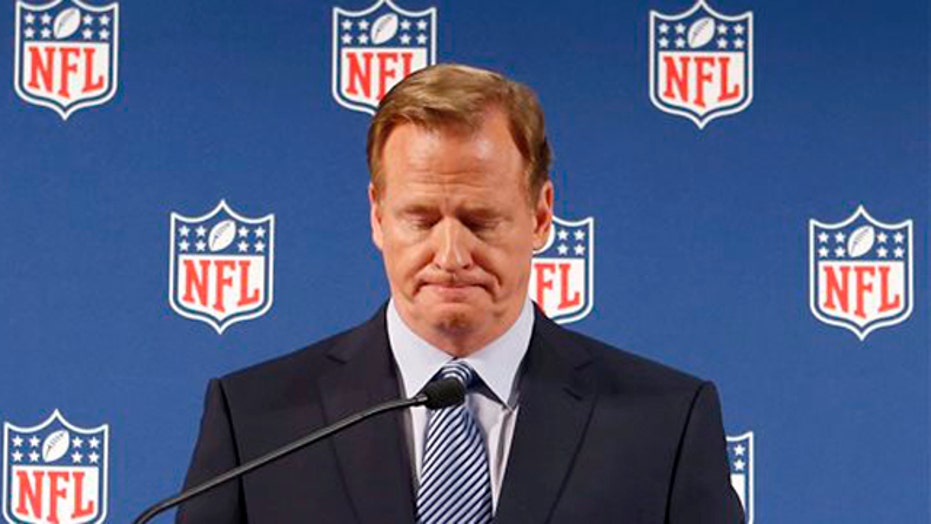 Media blowing the NFL controversy out of proportion?

Or is the outrage justified?

This is a rush transcript from "Hannity," September 19, 2014. This copy may not be in its final form and may be updated.

SEAN HANNITY, HOST: As the outrage ensues in the media regarding the NFL, an NBC News poll reveals that 85 percent of Americans say the scandals have not changed how much professional football they'll watch. And when it comes to how NFL commissioner Roger Goodell is handling the situation, well, less than one third of Americans think he should resign. So based on those numbers, is the media blowing the NFL controversy out of proportion, or is the outrage justified?

We bring in our distinguished studio audience for reaction. This may surprise everybody. I'm only going to make one political point tonight.

HANNITY: Listen -- only one -- I got it wrong on the Ray Rice matter.  I'm sorry. We will get our house in order. We condemn and we will punish -- he said, We will conduct -- we'll get new policies, we'll bring together the owners, the players, the players association, outside experts. We're not going to cover anything up.

You've been in the NFL what? You were in there 22 years.

LANDETA: You know, I think he did well. I think it's a bad situation for him, where here, he's taking the brunt for things that he didn't even do. This stuff, unfortunately, has been going on in the NFL for a long time, except it's being reported about much more now. So the only good thing, hopefully, is there's so much visibility about it, the players and the league really may cut back on this, and hopefully, the rest of society, which is more important, will happen to have a good effect on them.

HANNITY: You know, Rush made a point on his radio show. When you actually look at the numbers of people in the NFL and then the population as a whole, the population has higher incidence.

Bo Dietl, you were in the police force for a lot of years. You've seen a lot of domestic violence cases, child abuse cases, right?

BO DIETL, FOX CONTRIBUTOR: Yes. You know, here are some statistics, if I may -- 88 assaults, 85 incidents of domestic violence, 38 gun arrests, 82 drug charges, 202 DUIs, 10 sexual assaults. There's 730 felony criminal charges there. This is since 2000. It's a lot of charges, but what our society is, is this is a cross of our society.

I like what Roger Goodell did today. I think he should draw the line now and say, We're not going to accept that behavior in the NFL. Now that the people don't want it and people recognize it's there, we got to stop it.

HANNITY: Wasn't it refreshing, though -- I'm wrong, I'm sorry, I'm going to make it right. I felt that there was something there that -- by the way, Obama can learn from -- my second political point. All right...

DIETL: He said he was sorry (INAUDIBLE)

HANNITY: Let me go to Jamie. Jamie -- Atlanta Falcons cheerleader how many years?

JAMIE KELTON, FMR. ATLANTA FALCONS CHEERLEADER: I just did it for one year, but it was a very concentrated year.

HANNITY: A highly coveted position. I remember watching the reality show about getting on the cheerleading squad for the Cowboys. It's hard work.

HANNITY: Right? A lot of work. How were the players to you?

KELTON: You know what? It was actually the lockout year when I was a cheerleader, so I didn't have a lot of contact with them before the season started. And they're pretty busy during the year.

But you know, I think the big thing with this is we need to intercede before they get to the NFL. These are young, impressionable men. And I think -- you know, I went to the University of Alabama. Nick Saban (ph) has invested over $600,000 to get...

HANNITY: My wife graduated from there.

HANNITY: I was really not happy when you beat Notre Dame. But that's a side issue. Yes.

HANNITY: Welcome to "Hannity" show. Pile on. Go ahead.

KELTON: But I think what needs to happen is we need to get to them younger before -- you know, and stop it before it starts.

HANNITY: You know, Kirsten, one of the things that has always impressed me, as a former Miss America, is how poised the level of maturity that you have, how smart you are, all of those things. I think that's unique, though. Here you've got guys that are trained to be warriors, to go out and kill on the field. They've got money that they never thought they'd have in their life. And then, you know, if you go to any hotel after a game, a whole bunch of women are waiting to meet them.

What happens to them? Why -- does that impact how they view life?  Does it distort their view of life?

KIRSTEN HAGLUND, FORMER MISS AMERICA: Absolutely. And you see the same thing with a lot of celebrities who are given a lot of attention.  They feel that, you know, they can do anything they want, and people won't hold them accountable.

And that's why this is great, is that -- as, you know, we've mentioned, this has been happening in the NFL for a long time. What we need to see is some consequences for these actions so there's deterrence so that other young men in the NFL know that they're there to play the game, but they also have to be role models because they are public figures in their personal life, as well. That's how they'll be able to get these kids young that are up and coming stars. They want to get involved, they've got to keep that integrity in their personal life, as well.

FATHER JONATHAN MORRIS, FOX CONTRIBUTOR: Well, first of all, I should make a confession, OK? Usually, I hear confessions.

MORRIS: But the confession is that the Catholic church got this wrong so badly leading up to 2002, which is really when the...

HANNITY: ... whole sexual abuse scandal broke out. And that is because the Catholic church, like so many other institutions, unfortunately, protected the institution over the individual.

The NFL has done this here. Thank God, Goodell, Roger Goodell, has corrected it pretty quickly. But the problem at the beginning was, Protect the institution over the individual.

HANNITY: Well, wasn't he forced to -- let's be real here. He was forced to do it. I'll give you one example. In baseball, everybody loves home runs. It was bringing a lot of people into the stadium. Nobody had any doubt that these guys were using steroids, but they let it go because the fans wanted it. Some of these are the top stars involved, and they're looking at dollar signs instead of what's right? Is that what you're saying?

MORRIS: It's the exact same thing that's -- the temptation for every single institution. We see that right now in the public school system. We see it in so many other organizations. When you are protecting the institution over the good of the individual...

MORRIS: ... you're going to have terrible consequences.

HANNITY: Hang on one second. I want to ask Dr. Ludwig about this.  We all saw the Ray Rice video. I think we were all -- it shocks the conscience to see something like that.

HANNITY: But yet she was a fiancee and married him the next day.

HANNITY: Then the second part is, she came out and said, Don't destroy my husband and my family, and leave us alone. Should the public leave them alone? Is that a fair...

LUDWIG: Well, Ray Rice should -- well, obviously, there's the law that's going to get involved. But now this is bigger than just her and her family. Yes, Ray Rice's wife has a right to protect her family and say whatever it is she wants...

HANNITY: But the law saw the tape.

HANNITY: Roger Goodell said today he did not see the tape.

LUDWIG: Well, we don't know whether that is true or not...

HANNITY: If he lied about it today, he's finished.

LUDWIG: But now it's on a national stage. And we as a society have to bring this up and say, Hey, this is wrong. When a husband or a fiance hits a wife unconscious, there's something wrong. There should be consequences. Somebody who has this position in society, who gets paid, who has a great job as a football player, a professional -- he should be held accountable because he is a role model. He has an opportunity to change things around, and we should hold him accountable for that.

HANNITY: All right, we're going to get back to that. Melissa, I love your Web site, Thefootballgirl.com?

JACOBS: Yes, we -- we do everything NFL that you'd see on any other site, player interviews, fantasy, reaction, obviously a lot of coverage on this topic...

HANNITY: I've interviewed Dr. Robi, too, so I don't know. We have to clarify -- all right, but the important thing is the NFL has reached out to women. I mean, you see them with pink shoes and pink gloves, and I think they've made a concerted effort to bring -- reach out to the female demographic, to bring them into the game because they want to expand their base.

HANNITY: Did this hurt them?

JACOBS: Absolutely. They've reached out to their wallets. The female apparel for a while has been the fastest growing ancillary business in the NFL. And they know that, and you see that. If you go on NFLshop.com, you'll see 10 to 15 different lines. I mean, ask Alyssa Milano, who has one of them. I mean, that's -- that's really where they're more concentrated on women, versus dealing (INAUDIBLE)

HANNITY: Has all of this changed your opinion, though, as, you know - - what's the name of your Web site, Thefootballgirl.com?

HANNITY: Has this changed your view in any way about the NFL, the treatment of women, that they've allowed this to be pushed under the table?  Are you -- are you -- or do you want to give Goodell the benefit of the doubt?

JACOBS: Well, he doesn't get the benefit of the doubt on this issue because it's been mishandled in so many ways and so reactive...

HANNITY: He said he's sorry, he was wrong.

UNIDENTIFIED FEMALE: After the fact!

JACOBS: After the fact. Everything's been a reaction...

HANNITY: Well, do you want him to say he's sorry and wrong before the fact? I mean...

JACOBS: Yes! We've noticed that there's a problem amongst our players, and we have a zero...

HANNITY: You don't accept his apology.

JACOBS: We have a zero tolerance -- I'll accept anybody's apology, but they need to do better.

HANNITY: But when you promise -- they pledge that today. I sensed sincerity in him today.

DR. MARC SIEGEL, FOX MEDICAL CONTRIBUTOR: But Sean, the thing is, this is -- no matter what, it's still window dressing. Look, these are our role models. Kids are learning from NFL players. There's a lot of things they do right. But it's a culture of violence. I'm not surprised that this is happening.

HANNITY: You say football is a culture of violence?

HANNITY: Is that what you're saying?

HANNITY: I played ice hockey my whole life and...

SIEGEL: Well, it's the same thing.

HANNITY: And by the way, when I played, it was legal to punch.

HANNITY: You know, you didn't get thrown out of game.