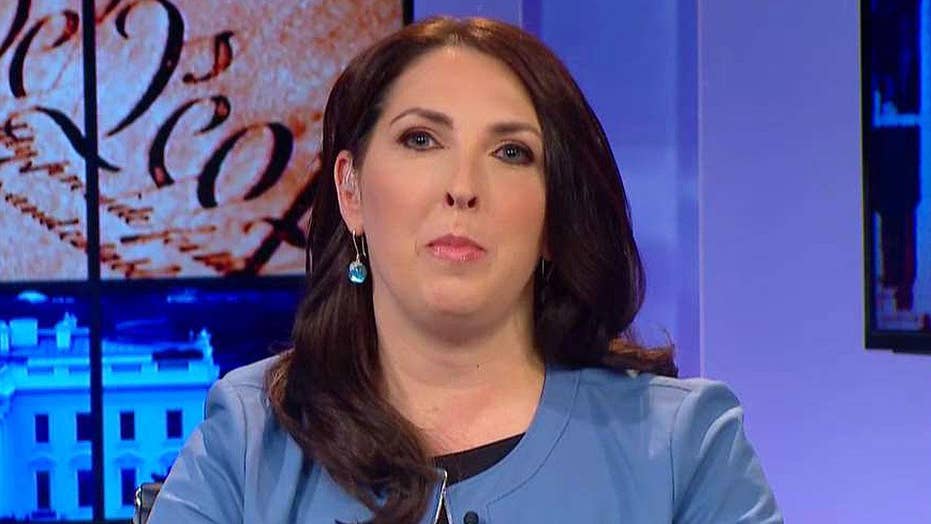 McDaniel: Time to get out 'distraction-mode' in Washington

On 'Your World,' the RNC chairwoman says Comey went further in damaging his reputation

This is a rush transcript from "Your World," June 8, 2017. This copy may not be in its final form and may be updated.

NEIL CAVUTO, HOST: We have got Republican National Committee Chairwoman Ronna McDaniel with us.

Ronna, very good to have you.

RONNA ROMNEY MCDANIEL, CHAIR, REPUBLICAN NATIONAL COMMITTEE: Thanks for having me, Neil.

CAVUTO: What did you think of the whole Comey thing? Did he lay a glove on the president?

ROMNEY MCDANIEL: I think James Comey today was trying to restore a reputation for himself that he damaged.

I think, today, we learned that the president has been vindicated, that he told the truth, and that James Comey was right to be removed as FBI director.

CAVUTO: I talked to some people about this, that former FBI Director Mueller would have never allowed, and this is something that Senator Lindsey had pointed out, would never have allowed the former FBI Director Comey to have even testified today had there been any doubts or concerns or that this investigation had elevated to a charge of obstruction of justice or concerns about that.

So, the fact that he did tells you that he's not worried about that. He's not looking into that. What do you think?

ROMNEY MCDANIEL: Yes, so, the president was never under investigation. There's been no obstruction of justice. No investigations have been impeded.

And there's been no proof of Russian collusion. So that is what came out of today's hearing. The president was accurate when he was said he was told he was never under investigation. That's been now verified by Director Comey.

And now it's time to start moving on and getting to the business of helping the American people, whose health care is failing, who want tax reform. And we need to get out of this distraction mode in Washington and start focusing on the people of America, who need our help and our leadership.

CAVUTO: All right, by the way, I misquoted. It was Senator Lindsey. And he said, what counsel would allow a former FBI director to testify if he was making an obstruction case?

So, I think -- I think you agree with that sentiment.

But let me step back from this and get your sense of the president, where he stands. Let's say -- and I had someone else say that Mueller could have an investigation wrapped up by the end of the summer, by Labor Day.

And let's say just that the president's behavior might have been a little inappropriate, but not illegal, certainly not impeachable. Then what?

Do you worry that, in that interim, things gets backed up and the tax cuts, health care fix, even this House effort now to, you know, put the kibosh on Dodd-Frank, the financial reform law, that all gets pushed back to 2018?

ROMNEY MCDANIEL: Well, the president has remained laser-focused on the American people. We have already seen deregulation.

You have seen him this week talking about infrastructure. We have seen him make great strides in helping to repeal and replace Obamacare. We have to stay laser-focused on that as Republicans, because that's what the American people deserve and want.

The Democrats like this distraction. They want this to remain a circus. They don't want to get to the business of passing legislation that will help the American people. But like Paul Ryan said, we can walk and chew gum at the same time and we need to get to work in Washington.

CAVUTO: Do you think this is going to just lead to a lot more hearings? I think the Senate Intelligence Committee chairman and the ranking member had both talked about the fact there have been nine committee hearings this year. More could follow, but that this has, even if it doesn't approach nearly the magnitude of the Watergate hearings in the summer of '73, it's the drama of the summer.

I don't see it approaching anything close to that, but the hearings are hearings and events are events, and a fixation is a fixation. But then what, if it gets to be one hearing after another?

ROMNEY MCDANIEL: I think it's exhausting.

There's a point where we have to start moving on and letting this go. We do need to get to the bottom of what Russia did and their interference in the election. And we need to also figure out how the Obama administration failed so miserably to allow Russia to have this type of impact in our country.

But President Trump is going to remain focused on the American people and Republican leadership is going to do that, too. And all we have seen from the Democrats is basically them sitting on the hands -- their hands and fueling this fire.

And there is no there there from anything I have seen. There's nothing there.

CAVUTO: Well, let me ask you this.

We have not heard from the president on this. We heard from his lawyer today. In fact, we haven't seen a tweet from him in days. What do you think of that? Do you recommend that that is a good idea, less tweeting, more just leading?

ROMNEY MCDANIEL: The president is working. He's focusing on what the president needs to do, infrastructure, tax reform, national security, reforming health care.

That's what we want our president to do. And today just proved again that these investigations are leading nowhere.

So, a lot of his cynics were saying, oh, he's going to tweet something out.
But he hasn't.

CAVUTO: And my view is that I have no problems with tweets. I think they're fine. And it got him to the Oval Office, but tweets on topic or on concern and try to avoid distractions. I have heard that others have told him the same. Have you?

ROMNEY MCDANIEL: No, I haven't. I have not talked to him about his tweeting.

I'm just so proud of what he's done to lead this country. And I think, in my home state of Michigan, people are relying on him and Republicans to come forward and help them when their health care premiums are doubling, when their health insurers are pulling out of the marketplace.

They're worried about tax reform. We need leadership here in Washington. And this whole thing today is just a distraction. Republicans are not going to allow that to keep -- to take their eye off the ball.

CAVUTO: Do you have any doubt that this thing is resolved quickly, whatever you make of these investigations, that they are resolved by the end of the summer?

ROMNEY MCDANIEL: I don't know how soon they will be resolved.

But I do think we have confidence in Director Mueller and the Senate and the House and what they're going to do going forward.

Ronna McDaniel, thank you very much, the RNC chairwoman.