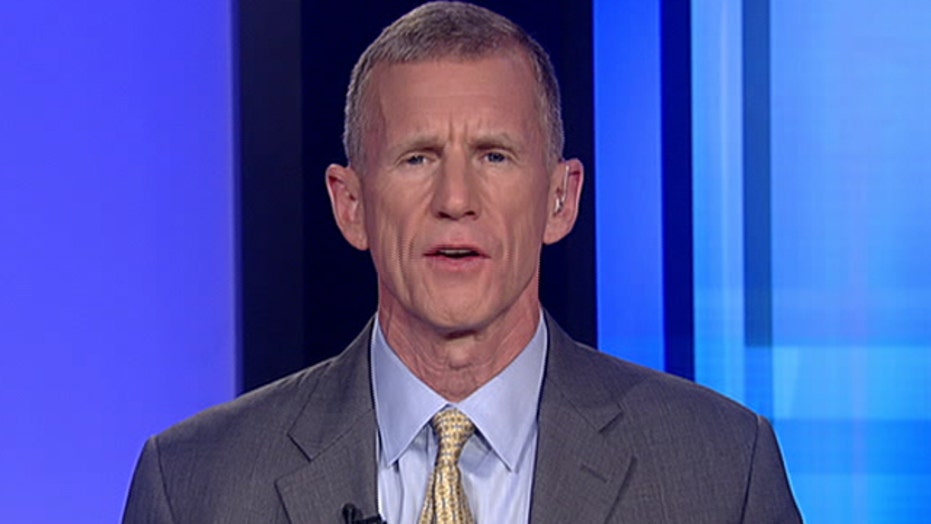 McChrystal: ISIS is organic network, we must adjust strategy

Uncut: Retired US Army general and author of 'Team of Teams' says we must go beyond 20th century thinking, airstrikes and killing leaders when combating ISIS. We must take out ISIS' political narrative and win back Iraqi people's confidence

This is a rush transcript from "On the Record," May 26, 2015. This copy may not be in its final form and may be updated.

GRETA VAN SUSTEREN, FOX NEWS HOST: Right now, preparations to take back from ISIS the critical Iraqi city of Ramadi. So what must be done?

General Stanley McChrystal, author of the new book "Team of Teams: New Rules of Engagement for a Complex World," and former commander of U.S. forces in Afghanistan, joins us.

Good evening, General. I have to tell you, reading your book, it filled in so many holes in my understanding of the Iraqi war. It was a great read. Let me turn to the disturbing question, what must we do or what must Iraq do now to win back Ramadi?

GEN. STANLEY MCCHRYSTAL, FORMER COMMANDER OF U.S. FORCES IN AFGHANISTAN & AUTHOR: I think in the near term, winning back Ramadi is a military issue. But winning back the confidence of the people of Iraq, particularly the people of Anbar is going to be harder. Is global strategy the ability to larger force very rapidly. We have a much more fundamental challenge of rebuilding the resolve and the confidence of the Iraqi forces.

VAN SUSTEREN: Well, Secretary of State Ash Carter blamed it on Iraqi forces lack of will is why Ramadi fell -- why ISIS took over Ramadi. Do you agree with that?

MCCHRYSTAL: I'm hart-put to blame it on soldiers in trenches because I wasn't there with them and they faced a difficult foe. The challenge goes higher. Government and military leadership and to a greater degree goes to the entire fabric of the region, the partnerships and coalitions and alliances that are going to be necessary to take on things like ISIS.

VAN SUSTEREN: Well, when you read your book, and it also discusses the use of ISIS, or AQI - al Qaeda in Iraq - use of technology, it seems like Ramadi what happened was that ISIS almost, in many ways, besides a lot of things, outsmarted with technology, social media. They almost went black a little bit right before they did the takeover.

MCCHRYSTAL: Yeah, we think we have technological edge because we have got aircraft and precision weapons. In reality they are leveraging technology really effectively. What they are doing is first they are terrifying the region. People believe that ISIS is behind every door and under every bed. Two, they are convincing people that intersection essential movement. Three very, very average because they are not a traditional hijacker call kind of force that needs the traditional kind of command. They are able to move quickly, we should take some lessons from that.

MCCHRYSTAL: I think we think we need to think differently. If we look at specific buildings in Raqqa. That's sort of a 20th century approach to industrial kind of war where we think a place or even certain individuals are going to be decisive. The death of Abu Saif is important. ISIS is an organic movement. It's more a set of franchises and moves almost like a vapor cloud propelled by very aggressive use of information technology for recruiting, for propaganda and for informing its forces. I think we need to think differently about that.

VAN SUSTEREN: You know, it's interesting that you point that out. That's where I assume many of their leaders are. I assume their leaders are other places, too. In your book, you said every time -- this is talking about AQI, Al Qaeda in Iraq. "Every time we thought we had landed a debilitating blow to the organization as a whole, removing a ranking leader whose loss should have derailed them, they bounced back." Almost like in your book you could take out the leaders, that didn't get in any way advance the cause.

MCCHRYSTAL: Think of it, very seductive to think if you take out Mr. Big they are going to collapse. As I joke with people, I said, what if I went as they serve there in the Pentagon and took out the top four or five people, would it cause the Pentagon to collapse? Of course, I joke with people, no, it would have gotten better. But that's a joke but the reality is individual leaders are rarely that important. They are an essential step to degrading a unit but they are not degrading it completely. And you have really got to take out the political narrative that they have and the glue that holds them together.

VAN SUSTEREN: If I'm correct in reading your book, it almost seems like, prior to the surge in 2007, one of the problems that we were having in Iraq is we were looking at the war, fighting it not in current time, like we weren't looking at the war in terms of, you know, 2004 or 2005 or 2006, using the war, thoughts, how war has been fought before. Is the president fighting this war in Iraq, to the extent, we are fighting it in 2015 eyes or is he behind on this?

MCCHRYSTAL: I think we are all behind on this. I think the first thing we are doing is we're looking at ISIS as this foe that lines up on the battlefield. In reality, I view ISIS as a symptom not the real problem. The real problem is this meltdown in the region that lets an organization that is really as obnoxious in their doctrine and behavior as ISIS is. I think if we look at what is actually allowing it to grow, and then the things that they are using to propagate, I do think we are taking an approach that says maybe if we bomb enough or do enough commando raids or give enough weapons to our allies that will solve the problem. I think it's a bit more complex.

VAN SUSTEREN: If you look at the bombing numbers, we are doing about 15 air strikes a day, considerably less than we were ever doing in Iraq. At one time in Iraq and Afghanistan, it was upwards of 800 a day. Are these air strikes having any remote possibility of achieving everything? We don't have boots on the ground even to identify targets. How do the air strikes even really truly advance our cause?

MCCHRYSTAL: Well, I think the idea of something as antiseptic in some ways, at least for the people propagating air strikes as that is, it's deceptive. Air strikes will not do it. They can be complimentary to a wider strategy, which you have to have a lot of components to it. But if we expect we need to find a clean, neat solution like that, we are probably going to be disappointed.

VAN SUSTEREN: With the benefit of 20/20 hindsight, back in May of 2006, then-Senator Biden wrote an op-ed, "We should divide Iraq in three places, into Kurdish region, a Shiite and Sunni region. We shouldn't mandate a rapid pullout." Should we have divided it, number one, and, number two, was our pullout so rapid that this was to be expected, the situation we have now?

MCCHRYSTAL: I think really two questions here. The pullout was faster than it should have been. And I think the Iraqis were part of the problem there. But I think the question of breaking Iraq into three pieces -- when in my own mind try to fast forward how that would be in the future, had we done that into a federal system or three separate states, I can't see a more stable region. I actually think an Iraq that is forced to work together is going to be better for the region in a region that desperately needs that kind of unity.

VAN SUSTEREN: All right. Is Iraq -- is Baghdad going to win back Ramadi or not? What do you think?

MCCHRYSTAL: I think Baghdad will take back Ramadi. The question is whether they will win back the support of the Sunni people there.

VAN SUSTEREN: The book, "Team of Teams," a great book. As I said, General, it certainly helps understand better and fills in some of the blanks for me about the Iraqi war.

MCCHRYSTAL: Thank you so much.