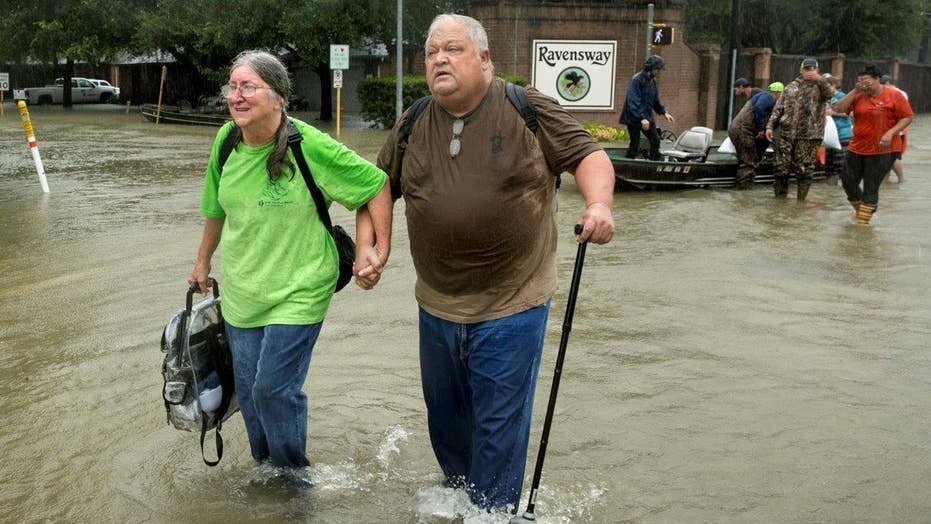 McCaul: People from all over came to Texas to save lives

This is a rush transcript from "Your World," August 31. This copy may not be in its final form and may be updated.

Floodwaters there, everywhere. As you know, they have had these controlled reservoir release, dam release that is going on. So for even homeowners who would have dodged this, they're not dodging it right now.

The fact of the matter is, the U.S. EPA has put out a statement that Harvey's floodwaters may contain -- this is coming from the EPA -- many hazards, including bacteria and other disease agents.

Oftentimes, when homes are under duress and on fire, they can do very little to address them under these conditions. So, in this particular case, they kind of let them smoke and burn.

Then we had separately earlier today this Arkema plant that is really a chemical plant. Sulfur dioxide is there. Methylpropene, a flammable gas, is there. They had repeated explosions because, with the power down, the temperature obviously going up there, and these particular chemicals, these agents, as they're known, can explode.

And, in fact, that's big fear right now at that Arkema plant; 1.5 million who were in range of that plant in Crosby, Texas, had to be taken out and evacuated. And there's no guarantee that follow-up explosions still won't happen.

Now, again, we're told and the plant's owners insist there's no danger to the public. But a lot of them are very, very concerned.

Separately, the fallout on the rest of the country is as pronounced as I told you before. The gasoline and related prices, whether you're in this neck of the woods or not, are going to go up. We have been seeing just at the pump. And then, again, this is just looking at futures prices, which ultimately telegraph where pump prices are going.

They're up 24 percent since all of this began. And now the fear seems to be that it's just a matter of time before you feel that.

Texas Republican Congressman Mike McCaul visiting Harvey victims, seeing a lot of this devastation up close, he's on the phone with us right now.

Congressman, the more you get into this, and the more you realize how damaging this is and how this is going to be the most expensive storm ever, there's no -- there's nothing quite like seeing it for yourself.

I have been throughout my district. I'm in the Houston emergency operations center. I spent the day with the National Guard, with FEMA.

We had FEMA, firefighters all over the country coming to Texas to assist in the rescue efforts, state and locals. Just got out of an emergency shelter.

I can tell you, it's devastating. My grandfather survived the 1900 Galveston hurricane that killed 10,000 people.

MCCAUL: But this one, fortunately, loss of life hasn't been near that scale.

But I can tell you, in terms of damage, property damage, and the impact on so many lives, this is a massive natural disaster.

CAVUTO: You know, obviously, it is going to go in the record books in terms of damages. But that doesn't really tell the entire story.

There's some inspiring stories that have come out of this, but even limits to these volunteer stories that have heard, the Cajun Navy and those from Louisiana and in Texas itself trying to rescue people from their homes and all.

But I'm sure capacity at shelters and where a lot of these evacuees have gone, you must be running at wits' end here. Red Cross directors have been telling me much the same. Every new facility they open is a facility that is quickly filled.

How long do you see these places being filled with evacuee, especially if it looks like just this water coming back and receding could be a multi-week development?

MCCAUL: Well, it's going to be multi-month to a year.

We have so many homes underwater. And Reliant Stadium, we're putting out 10,000 beds there. People have to be relocated. I have got the National Guard at the Katy High School outside of Houston, Texas. This is going to be a long-term recovery.

We have -- I think we're starting to get out of the search-and-rescue phase. And let me just say, to your point, there's just countless untold stories of heroic acts of bravery, saving lives.

And I have seen these people firsthand. And they come -- not just Texans saving Texans, but it's also people from California, Nebraska, Ohio, just all over the nation coming to Texas to save lives.

And I think now we're moving into what is being called the rebuilding phase. We are going to have to take the debris recovery and rebuild Texas. And we want to build it back better than ever. But it's going to take a long time to recover from this.

CAVUTO: Congressman, thank you. I know you're taking in quite a bit.
But, again, it's just amazing.

Did not know that about his grandfather, 1900 disaster that goes down really as the greatest loss of life in this country back in 1900, when better than 8,000 lost their lives.