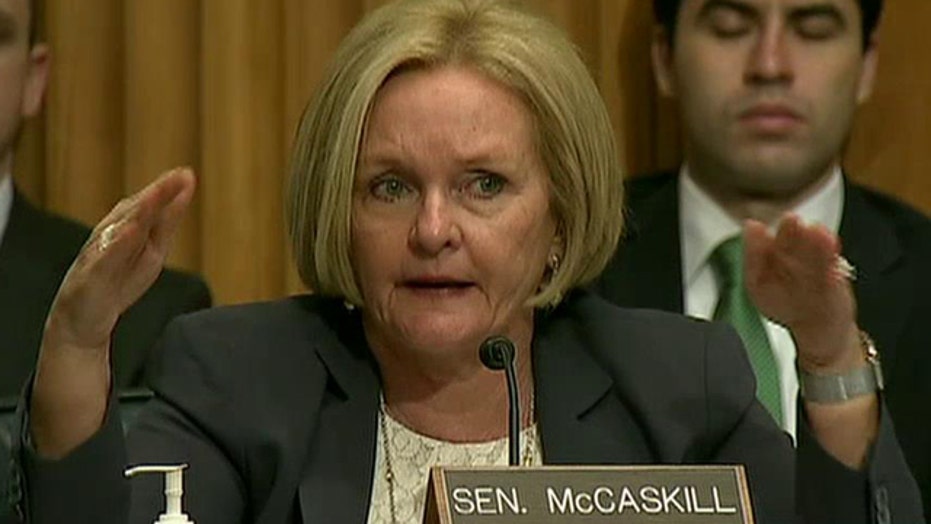 McCaskill: 'Price to be paid' from homeland security cuts

Is more spending the answer?

Charles Payne: Its sort of shameful because we are always talking about disasters and the knee jerk reaction is ‘give us more money’. What I do like though is that they use the word invest, not spend. It doesn’t solve the problem

Dagen McDowell: It's either people that don't know how to do their job correctly or -- it's called getting fired if you miss a man carrying a fake explosive device on his body. There was the one undercover guy that got through. He set off one of the detectors. Got patted down. They missed the fake explosive device. Guess what, it happened several years ago.

Charles Gasparino: They spent money on community redevelopment and school and just go to Amtrak. You know, they spend a lot of money on Amtrak. You want I’m saying? Part of Amtrak is very profitable. They don't want to privatize it. They need to spend more money on the TSA. One question is I don't think we should be cutting back. I mean, you know, this is -- if it only takes one guy to get through, and god forbid one guy gets through. Maybe we should spend money

Ben Stein: I think generally speaking, you have a better quality of people if you pay them more. I don't think the TSA inspectors get paid very much, and I think they have to be on their feet all day, and they have to deal with very rude, surly bastards. I think that's a whole different story. The more money we spend on schools in these urban poor areas, the better -- the worse the results are. Not the better.

Adam Lashinsky: There's $7 billion. In all honesty, it's just a number.

Charles Payne: We should point out that John Mack is trying to be treasury secretary. He thinks that he has a shot at it. He wants -- he would be a better secretary than Jack Lew. He would be a good one. The problem is that john doesn't realize this is not the Democratic Party that he thinks it is. It's not the Democratic Party of him and his friend Larry Fink at black rock that are marginally liberal Democrats.

Dagen McDowell: Locked in and will be pushed further into that corner by those on the far left who are also running. Bernie sanders, Elizabeth Warren, your shadow candidate, I guess, because she's doing everything she can to push Hillary to the left. It raises the issue. Charlie can speak to this too.

Charles Payne: Hillary may evolve like some presidents have evolved on things that they probably always believed, but couldn't get elected believing until the popular perception of a particular issue changed because if they're going to win, and you see the way it's going, then you evolve.

Adam Lashinsky: Hillary Clinton is a pro-business democrat and it is not out of the norm for candidates to run to the far side during elections

Dagen McDowell: It's actually happening. They want to say you're going to eat this dish in New York City that's got too much salt in it, I think they should hire people to stand over you, back, back, back, while are you trying to eat.

Ben Stein: I love salt. I love sugar. I love fat. I know I'm very overweight myself. I only have one life to live. I want to eat it, eat -- live my life being fat, salty, sugary foods. I don't want the Orwelian standing over me, and i find it a rule to be able to try to control my intake of food are mentally ill.

Charles Payne : It's so funny you talked about the salt stick. Between that, the calorie count, and everything else, pretty soon every item will have its own page.

Chalres Gasparino: As somebody who is in favor of some of the stuff, i would say two things. Number one, we have socialized medicine. The government is on the tab for all these fat people