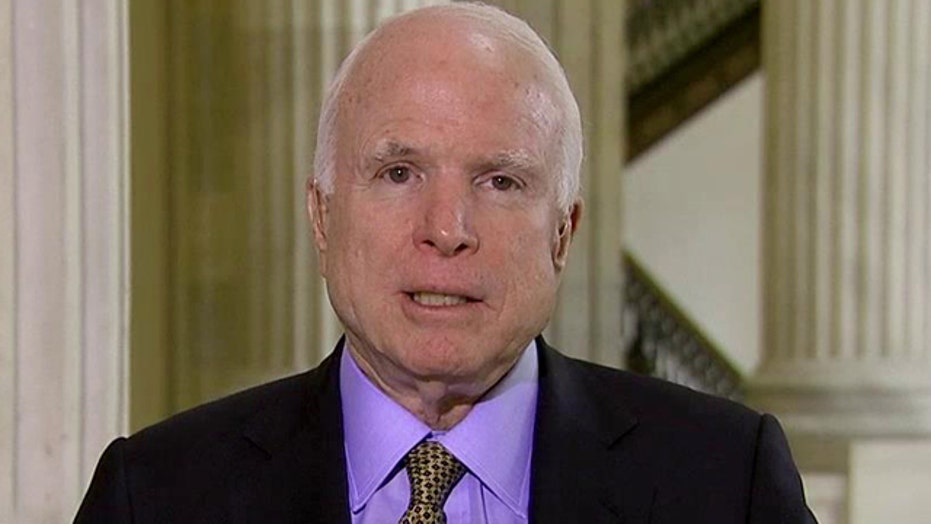 McCain responds to Rand Paul calling him 'lapdog' for Obama

This is a rush transcript from "Your World," April 22, 2015. This copy may not be in its final form and may be updated.

NEIL CAVUTO, HOST: You know, Senator John McCain was the first Republican, of course, to run against President Obama. And now he is a lapdog for President Obama? Look at this.

CAVUTO: So, I immediately said, guys, we have got to call Senator John McCain.

CAVUTO: He is here.

Senator, lapdog, what do you think?

SEN. JOHN MCCAIN, R-ARIZ.: Well, one of my colleagues said today -- he said, yes, McCain and Graham are a couple of -- are lapdogs. They're a couple of Doberman pinschers.

MCCAIN: It's -- I put it this way. Senator Paul is the worst possible candidate of the 20 or so that are running on the most important issue, which is national security.

The list goes on and on. In 2011, he proposed a budget that would have cut defense by 30 percent. In 2011, budget would have eliminated all foreign assistance to Israel. He said Iran isn't a threat to Israel.

His -- the record is very clear that he simply doesn't have an understanding about the needs and the threats of United States' national security.

CAVUTO: What he did say, to be fair to the senator, though, Senator McCain, is that, in this case, if you look at the early push on the part of folks like you and Lindsey Graham to immediately intercede in Syria and to deal and take on Assad head on would have resulted in something far worse, and we're seeing it played out now, and that you missed that, and that that was something serious.

CAVUTO: What do you say to that?

We said you have got to arm the Free Syrian Army. The entire national security team, David Petraeus, head of CIA, Hillary Clinton, secretary of state, Leon Panetta, secretary of defense, all recommended...

CAVUTO: No, I understand, Senator. But he's saying -- isn't he saying that those people -- if you had done that, you would be arming what came to be ISIS?

MCCAIN: If we had armed them, Bashar al-Assad would have been overthrown, and we would have had a nation; 200,000 people wouldn't have been slaughtered with millions of refugees, one of the greatest genocides committed in recent history by Bashar Assad.

He was about to go. It was the president of the United States himself who said it's not a matter of when -- of whether, but when Bashar al-Assad is going to leave. Dempsey, the chairman of the Joint Chiefs of Staff, Panetta -- and Panetta both said it's inevitable that Bashar Assad will go.

So we watched while the Iranians came in with 5,000 Hezbollah, tons and tons of equipment, training...

CAVUTO: Well, no, no doubt, Senator.

CAVUTO: And, as you said to me, it's all water under a very bloody bridge, and you're quite right.

But now you mentioned at the outset particularly sharp criticisms of Senator Paul that he is the worst of that bunch running for president right now on these issues.

CAVUTO: So if he were your Republican nominee up against Hillary Clinton, who would you vote for?

MCCAIN: Yes. I would support the nominee of my party. I am a loyal Republican.

I would hope that good sense would prevail here, because the realities of the world today doesn't allow for the isolationist policies. We have already seen what happens from -- quote -- "leading from behind," leading from far behind. And that's what Rand Paul would do.

But I would hope that many of us could prevail on him to see the world in a very different light. But I'm not going to not support the nominee of my party.

CAVUTO: Is he the worst of the presidential candidates then within the party right now?

MCCAIN: On national security, absolutely, there is no doubt in my mind.

When you want to eliminate aid to Israel, when you say that ISIS is not a threat to the United States of America, I mean, the list goes on and on. And, by the way, he keeps mentioning Libya. My friend, we didn't lose a single plane or pilot in the Libyan operation. Gadhafi was at the gates of Benghazi. He was going to slaughter thousands of people.

And after he after he was taken out, we walked away, again, leading from behind. If we had done the same thing in Europe after World War II, after we defeated Nazi Germany, terrible things would have happened in Europe as well. Lindsey Graham and Joe Lieberman and I called for and begged for the kind of assistance that Libya needed at that time.

And now, again, leading from behind, we're paying a very heavy price for it.

CAVUTO: But, you know, this is not the first dust-up you have had with Senator Rand Paul or, for that matter, Ted Cruz. Many say they're both the sort of very in-your-face, rising, young breed of senators, both of whom are now running for president.

Senator Cruz was among those during New Hampshire over the weekend that said he had pressed you on a bill to allow concealed firearms on military bases. You said he had never done that. He had to dial that back. I guess you guys have kind of made up. But he said of you, that is, Senator Cruz: "Oh, I like John McCain. He can always be counted on for a good quote."

CAVUTO: Where do relations stand with you and Senator Cruz?

CAVUTO: Who do you like more, Senator Cruz or Senator Paul?

It's -- because I like Democrats who a number of Democrats who disagree with me strongly, just like Ronald Reagan liked Tip O'Neill. But the fact is, what do I think is necessary and the transcendent issue of the 2016 presidential election? National security. I will repeat. Rand Paul would be the worst candidate on the most important issue.

CAVUTO: Would Ted Cruz be better?

MCCAIN: Yes. Yes. Yes. Ted Cruz has a much better handle on our national security issues.

And I'm not -- look, Lindsey Graham is my candidate. He is the guy that understands the best. He is the one that has the understanding in depth and ability to lead this nation through what Henry Kissinger said are the most crises, period of crises since the end of World War II.

Now, you know a lot of people are going to say that it's a classic battle between the old lions of the party, the new up-and-coming lions of the party -- I'm talking about Senator Paul, Senator Cruz, you and Senator Lindsey Graham on the other side.

MCCAIN: Well, first of all, I'm not sure that Lindsey Graham is so old.

But Marco Rubio is another one who is a freshman member of the Senate who has good credentials. Chris Christie does. Walker does. There's -- Jeb Bush does. I mean, there's many that have excellent ideas and thoughts.

CAVUTO: But you know what I'm saying, that that traditional viewpoint espoused by you -- and you're right -- Lindsey Graham is younger than you, not that you're old, Senator. Don't take me wrong.

CAVUTO: But that you reflect views that are more in sync with the mainstream party in being very, very in-your-face on military issues. That's your wont. That's fine. But that the Cruzes and the Pauls have a much more different, don't get knee-deep, don't get involved, watch what kind of altercations we get into because we pay dearly for that.

You say what to that new guard?

MCCAIN: I say that that is not my view of Ted Cruz's views of the world, nor Jeb Bush, nor Chris Christie, nor Marco Rubio.

Marco Rubio is excellent on these issues. So I think that, to varying degrees...

CAVUTO: Who is your candidate, Senator? Who do you like of that big bunch?

CAVUTO: All right. So let's say he doesn't run, despite your pushing and urging.

CAVUTO: Who of the established main -- now, you know the Koch brothers have already had their five picks eyed. Who do you have?

MCCAIN: I would let the system play out. That's why campaigns matter and debates matter.

But I have a great respect for Jeb Bush. I'm going to leave somebody's name out, Chris Christie, Walker.

CAVUTO: Yes. But let's say you're not going to be doing any ads for Rand Paul for the time being.

Look, again, I have a number of them. I'm very impressed with Marco Rubio. He's a very articulate guy.

CAVUTO: OK. You have mentioned that a few times, Marco Rubio. All right.

MCCAIN: Yes. I tell you, Chris -- Jeb Bush is a wonderful guy.

CAVUTO: All right, just not those other guys.

CAVUTO: Thank you very much, Senator. Appreciate it.