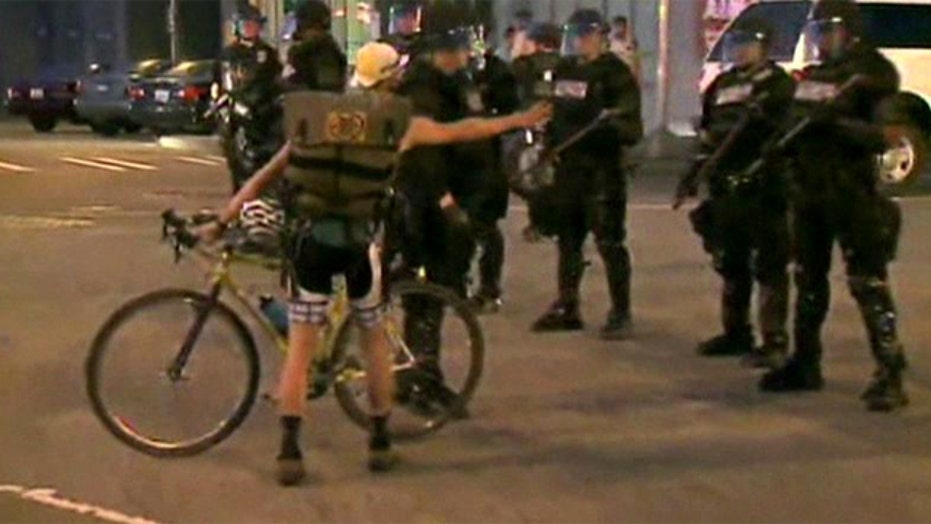 May Day protests causing a mayday for jobs?

ANTI-CAPITALISTS CLASH WITH POLICE DURING MAY DAY PROTESTS IN SEATTLE

GARY B SMITH: If you look back at some of the richest people we have had in our country's history, they were all capitalists. These protesters either have it all wrong and they don't understand economics or are looking to have something like Cuba, which is rampant in unemployment.

JESSICA EHRLICH: I think they should be thanking capitalism in the sense that the base of capitalism is a strong middle class. I certainly don't know any teachers or bus drivers or plumbers or folks that belong to unions that fit into the bill of people who bash the capitalist economy.

JONAS MAX FERRIS: A good side effect is jobs. Your two choices are to create wealth and wealth is going to be unequal, or create no wealth, and that's where nobody has wealth like the Soviet Union or Cuba. It looks like a small group creates most of the wealth; if it gets bad then you have revolution and then capitalism gets destroyed and everyone becomes poor. You have to have a little there to keep people motivated, even though they may not become billionaires. You are rewarded from the wealth in those distributed to people.

JOHN LAYFIELD: We have a long way to go. We have high unemployment in our country, and to do away with that you will need people like Bill Gates. These guys are taping it on their iPhones, and asking the government to raise their minimum wage so they can work for a government they hate. These guys are morons. There were 400 of them and you can put that many in them in a large room without having a fire code.

TRACY BYRNES: It's not a good sign. The Secretary of Labor was on Fox Business on Friday saying, "You know, how we are going to make jobs better for people? Increase unemployment benefits to people, and pour more money into infrastructure." All that stuff has not worked. It's not encouraging entrepreneurism.

JOHN LAYFIELD: The ones that need to be signed up to pay for the people getting the insurance right now are not signing up. Nothing was done to health care. Health care was not fixed. Arguing over who pays does not fix the fractures within the system. Since 2009, health care costs have come down globally, not because of ObamaCare. It was the recession that brought it about. Now you are seeing ObamaCare implemented and the health care costs are rising, we are going to pay for that through tax dollars.

JESSICA EHRLICH: The number they are referring to in terms of spending are not that necessarily per visit amount that is going on, and it's the fact that more people are going to see doctors and more people are getting hospital services. The more people that you have and the more demand that goes into the marketplace, you will see the costs continue to decline, and that's what is happening now. According to the public comments by the insurance companies that have been up-to-date, at least 85 percent to 90 percent of the people that have been enrolled in the insurance programs have paid their dues.

GARY B SMITH: They have to pass the costs on to somebody. Either by going hat and hand back to the government, the Aetna's of the world saying, "Hey, we are losing money you have to reimburse us", which they made signs they will do, or they will pass the higher premiums to the young people or to people like you and I. The more money we spend on health care, you are exactly right, the less money we have to spend on food, gas, clothing and other things.

JONAS MAX FERRIS: This is the preexisting condition person that all of a sudden can afford health care insurance, and that's this bump so to say. I am not saying it's going to go away, because any insurance, this predates ObamaCare leads to over consumption. You have insurance and now you can use it. It's good everybody is insurance, but if everybody has a lot of insurance, it leads to reckless behavior.

TRACY BYRNES: All of those people seem to be okay, minus a few that had serious issues that were not insured, but the rest of us will start to abuse it to death and the costs are going to continue to go up.

JONAS MAX FERRIS: This whole ownership thing is absurd. It was taken to a level, it's nice to buy your house but it's not a good investment compared to the stock market. So many incentives to buy a home, you can sell it without having capital gains. Why not put the focus in the stock market. It has a lot of taxes and maintenance out of the buyer, so everybody should not be a homeowner. It's tying up all your wealth, and then it grows with inflation.

GARY B SMITH: We bought into the American dream of you start in a small home and went to a bigger home, and when you were in your 60s, you took all that equity out of your home and downsize and use the cash to travel to Europe or spend on your kids and pay off the house, and buy a smaller one. That's pretty much drying up right now, because the demand and the move up market are dying. All of those people like me, who thought they were going to get a nice chunk of equity out of your house, you will be lucky to break even.

JOHN LAYFIELD: In 1995, that's when 64 percent of home ownership where we are right now, and you had Clinton decide to increase homeowner ship up to 70 percent, and then you had Barney Frank saying let's roll the dice on mortgages and that created the entire housing dilemma and recession. There's a reason the home ownership rate should stay 64 to 65 percent in America. Getting back to the average is a good thing.

JESSICA EHRLICH: Well, I am going to say that I agree that home ownership as an economic indicator is not a wise place to go, but I disagree as to where that came from. It was as a result of the economy bubble that we had in 2000 and going forward in 2001 was after the terrorist attacks and it was a direct relationship from the Bush thing.

TRACY BYRNES: Maybe I don't want to dump my life savings into a home right now, and maybe I want to start a new. They are rethinking the way we will see home ownership in the years to come.

TRACY BYRNES: Ditch the lime and crack open a cold one! (BUD) returns a 15 percent gain in 1 year

JONAS MAX FERRIS: Leave your parents at home when you go on a job interview!