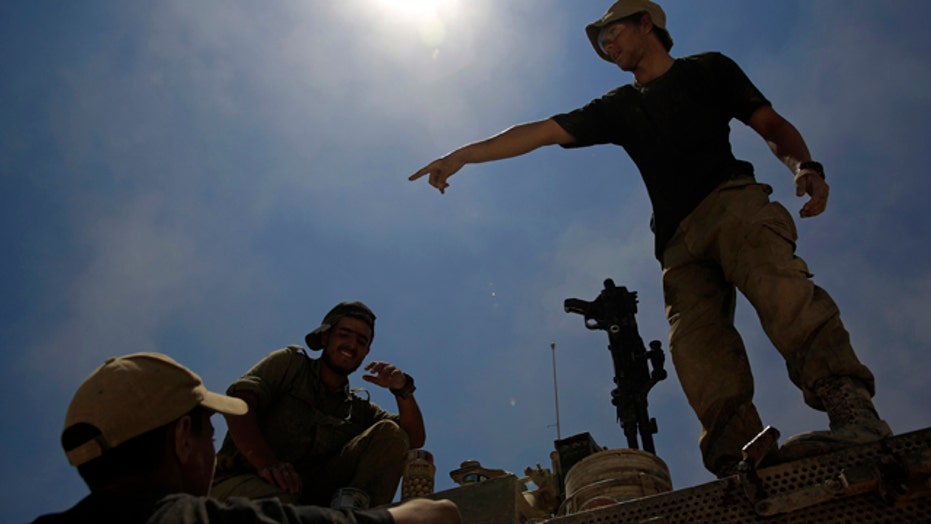 This is a rush transcript from "The Kelly File," July 29, 2014. This copy may not be in its final form and may be updated.

MEGYN KELLY, HOST: Around the world, we are seeing a range of media outlets express disbelief over the details of Secretary Kerry's weekend peace officer between Israel and Hamas.

The left leaning Israeli paper Haaretz using the headline, quote, "What was he thinking?" One author in the Jerusalem Post suggests "Mr. Obama has abandoned Israel." Even the Washington Post suggests, "The one thing everyone seems to agree on is that John Kerry blew it." The Associated Press reports that the Obama administration is fuming over the criticism, some accusing Israel of launching a misinformation campaign. The State Department spokesperson Jen Psaki went so far to say, quote, "This is simply not the way partners and allies treat each other."

Earlier, I asked the Israeli government spokesman Mark Regev about the terrible press on Secretary Kerry.

MARK REGEV, ISRAELI GOVERNMENT SPOKESPERSON: The Israeli press gives the Israeli government a very hard time. When we have a favorable article in the Israeli press, we light a candle and you know, have a birthday party to celebrate. So, the administration shouldn't be upset about this. Ultimately, the Israeli press is very aggressive, very critical, and it is par for the course.

KELLY: Now, let me ask you about that because the Israeli press definitely gave Secretary Kerry a hard time, but some of these articles are quoting government officials within Israel. The Times of Israel reported that Israeli government sources are accusing john Kerry of completely capitulating to Hamas' demands, and has proposed a ceasefire deal. Today, we heard another government official suggesting President Obama should quote leave us, meaning Israel alone, and go worry about Syria. Do you feel that the United States is doing more harm than good in Israel?

REGEV: Not at all, and I don't think all those unnamed officials -- I don't think there's anyone who's in the loop or senior government positions. Everyone in Israel knows the importance of our relationship with the United States, and what America has been doing these very days to help us.

KELLY: What was so bad about the cease-fire deal proposed by John Kerry that, you know, caused so many people to be upset about it in Israel?

REGEV: Well, we very much appreciate Secretary Kerry's involvement. The issue is difficult. We're dealing with hardcore, very radical, very extreme terrorists, people who don't share our values, have no qualms about targeting innocent civilians, about killing Israeli civilians, and sacrificing their own civilians for the very extremist cause. If it was easy, it would have been done. But we very much appreciate Secretary Kerry's efforts to try to bring about a sustained period of peace and security for Israel. It's a goal that we totally share.

KELLY: But the deal was rejected. So, what was it? I mean, because Americans are watching this, watching our officials come over and try to help, and wondering, why? Why did he get slammed so badly in the Israeli press? Why did the deal fall apart so instantly?

REGEV: Let's be clear. It's not that there was one proposal on the table. We're trying to overcome Hamas' refusal to stop shooting rockets into Israel. These are complex issues because Hamas refuses to play by the rules. This is the challenge, and this is why it's so difficult because Hamas like ISIS in Iraq or Hezbollah in Lebanon, or even Boko Haram in Nigeria. This is an organization that is a real threat.

KELLY: Mark, you know what? The criticisms of Israel in all of this, has been the civilian casualties on the Palestinian side. We're talking about 1,100 Palestinians dead so far, 100 of them just today. Palestinian officials claim that 80 percent of those are civilians. Without question, there has been civilian casualties, and with the understanding that Israel does try everything within its means to minimize civilian casualties and the concession that some in Hamas actually try to endanger civilians by placing their rockets among them, by placing their fighters among them, still understanding all of that Israel has come under criticism for not making its strikes precise enough, for example, leading to the destruction of the U.N. school last week, that was supposed to be a safe haven. To that, you say what?

REGEV: The first thing, the story about the U.N. school is being studied. Even the United Nations has not charged that it was an Israeli firearm. And frankly, we don't know yet. Obviously, we are saddened by every civilian casualty in Gaza. We don't want to see a single innocent civilian caught up in the crossfire between us and the terrorists. The chief of the Israeli army, the chief of staff Lt. Gen. Benny Gantz said yesterday in Hebrew, not to foreigners, not for public relations, he spoke direct letter to the Israeli public yesterday, and he said every innocent death in Gaza pains him. And I think he was expressing something very authentic among the Israeli public. We don't want to see the innocent civilian population of Gaza hurt, and we really are making a maximum effort to avoid what the experts call collateral damage, because the people of Gaza are not our enemies.

The statistics you quoted before are not true. All the international bodies are basically using statistics put out by the Hamas-controlled ministry of health in Gaza. I think when this is all over, we'll see the statistics much more even, but having said that, I don't deny the civilians are being killed. And the question is why is that happening?

Two reasons. First of all, because Hamas rejected a cease-fire two weeks ago that we accepted an Egyptian Arab League cease-fire proposal. All the deaths that have happened since then are solely Hamas' responsibility because they rejected ending the conflict.

And secondly, as you yourself said, Hamas has adopted gruesome tactics of using Gaza's civilian human shields. Just today, an hour before I come to this broadcast, Reuters put out a report saying a third U.N. school had been discovered with Hamas rockets in it.

This is not an aberration. This is a deliberate policy to use schools, U.N. facilities, to use mosques, to use football stadiums, to use urban areas to house their military machine, and we really are making a maximum effort to be as precise as we can in a very difficult combat situation. We have to stop those rockets raining down on our people. And we will protect ourselves.

KELLY: Mark Regev, thank you so much for being with us tonight.

REGEV: My pleasure. Thanks for having me.