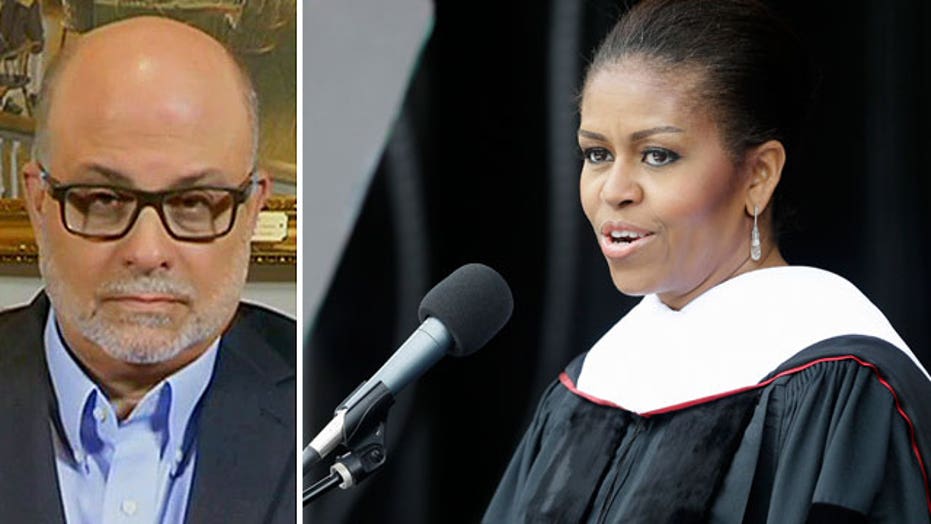 This is a rush transcript from "Hannity," May 28, 2015. This copy may not be in its final form and may be updated.

FIRST LADY MICHELLE OBAMA, MAY 25: I want to urge you to actively seek out the most contentious, polarized, gridlocked places you can find, because so often throughout our history, those have been the places where progress really happens.

Climate change, economic inequality, human rights, criminal justice -- these are the revolutions of your time. And you have as much responsibility and just as much power to wake up and play your part in our great American story.

OBAMA, MAY 9: But as potentially the first African-American first lady, I was also the focus of another set of questions and speculations, conversations sometimes rooted in the fears and misperceptions of others. Was I too loud or too angry or too emasculating?

We've both felt the sting of those slights throughout our entire lives, the folks who crossed the street in fear of their safety, the clerks who kept close eye on us in all those department stores, the people at formal events who assumed we were the help, and those who have questioned our intelligence, our honesty, even our love of this country! I know that these little indignities are obviously nothing compared to what folks across the country are dealing with every single day.

Joining us now to analyze those remarks, nationally syndicated radio talk show host -- I call him "The Great One" -- Mark Levin is back with us from deep down inside his bunker. Sir, how are you?

MARK LEVIN, RADIO TALK SHOW HOST: Well, I was great until I had to hear her, quite frankly.

HANNITY: OK. I listened to the speech in full. And I'm thinking, all right, you're the first lady of the United States. Your husband is the president, in spite his, quote, "funny name," to use her words. And why not tell kids, if we can make it in spite of obstacles, this is how far this country has come, righting wrongs, correcting injustices -- why wasn't that the message? It seemed angry to me. Your reaction.

LEVIN: Rather than this dime store Marxist claptrap, rather than trashing the American people and the American system on Memorial Day, when men and women gave their lives throughout our history so that she and her husband and all of us could live in freedom -- why didn't she give a speech about the American revolution and the great men who stood up and created this country and established this system of government?

Does she sound like somebody who loves this country? She and her husband luxuriate in our economic system, which they pretend to despise and which they've never contributed to!

LEVIN: She sounds like she's down for the struggle. She's never had to struggle!

HANNITY: She talked about revolution, but they've hung out with the most radical people. And she's the one that said a number of times, for the first time in my adult life, I am proud of my country.

I don't think people are questioning the love of her country. I'm questioning somebody that, for the first time, she's never appreciated any of the things that you have mentioned, all the people that have sacrificed their lives, all the blood that has been shed in the name of liberty and freedom that allowed them to rise to the highest position in the world!

LEVIN: For the first time in her life, she loved the country because her husband was elected to the Senate and president. How about when those U.S. Yanks went overseas and freed the Jews from the death camps? Wasn't she proud of the country at least historically at that point? And I can go on and on and on. This is despicable! And she gave one of these speeches on Memorial Day.

I mean, what is she revolting against?

HANNITY: Let me -- let me move forward to the 2016 race. We see all the scandals that Hillary is involved in, all the quid pro quo, all the questionable ethics, it's all back again because they're -- she's now apparently their anointed one.

You have to run the table. What does that Republican candidate need to win, in Mark Levin's view?

LEVIN: Well, the guy who ran the table was the most conservative Republican nominated for president in modern American history, maybe in history period. That's what we need to do.

I'm not happy with all these candidates. There's just too damn many of them. But that said, I can't control that, and neither can anybody else.

But I do think we conservatives are going to have to rally behind one or two or three relatively quickly or the RINOs are going to pick us off, as they did with McCain and Romney and they hope to do with Jeb Bush, among others.

And on the Democrat side, this is an amazing thing to me. I don't know how Hillary Clinton hasn't at least served some time in prison, given her background and what she's done. Now they've set up this front group to loan their money through so the sources of the money wouldn't be known that Bill Clinton receives.

I mean, there's so much graft and corruption and sleaze in this family and what they do! And yet apparently, that's the definition of the Democrat Party. She is right now -- I mean, unless you take the goofball from Vermont, she's right now the only so-called serious candidate the Democrats have.

LEVIN: I agree with you. Well, you need to do both. I don't think the candidate him or herself should get into e-mails and what an email said on May 12th, 2014. You can leave that to surrogates and others.

The Obama economy, let alone the foreign policy, they've been a complete and utter disaster. And the Democrats want to do more of the same -- tax, debt, illegal immigration, kill the currency, leave our allies on their own, stand back and watch genocide. This is a record. If we can't win this time around, I don't think we're ever going to win.

HANNITY: All right, the great one, Mark Levin, good to see you. You can catch him on his national syndicated radio show every day.