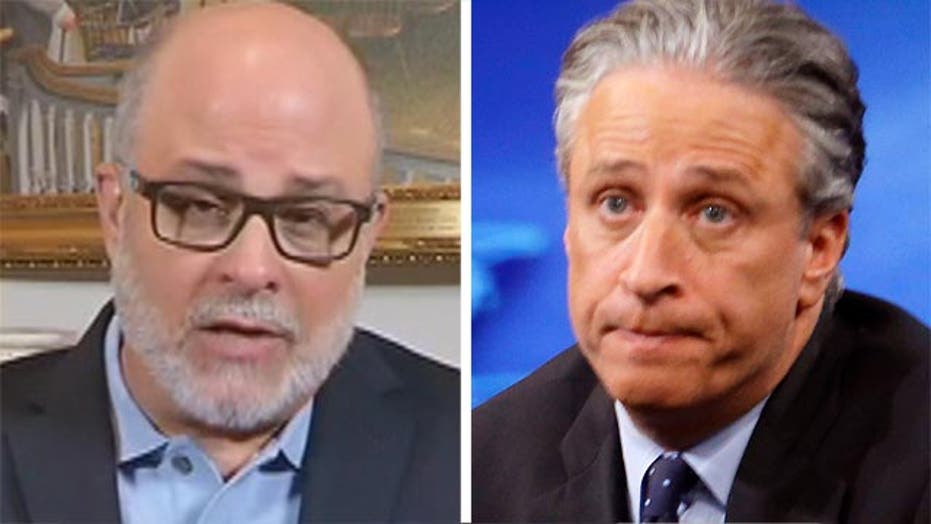 This is a rush transcript from "Hannity," July 22, 2014. This copy may not be in its final form and may be updated.

SEAN HANNITY, HOST: My next guest, "the great one," Mark Levin, went on an epic rant last week over Jon Stewart's criticism of Israeli airstrikes in Gaza. And last night, Stewart -- well, kind of sort of finally had the courage to respond. He still was not brave enough to mention "the great one" by name. Take a look.

UNIDENTIFIED MALE: What, Israel isn't supposed to defend itself?

UNIDENTIFIED MALE: What other countries are held to the same standard of Israel!

STEWART: That was weird.

HANNITY: Here with reaction, the man himself, "the great one," Mark Levin, nationally syndicated radio host.

You know, look, I understand he's a comedian, but there's a part -- you really went off on him hard. Very few people in the media, Mark, are willing to do that. Why?

MARK LEVIN, RADIO TALK SHOW HOST: First of all, that looked like MSNBC there for a minute.

LEVIN: And that particular segment -- I don't watch him, but I watched this -- well, I watched this segment on the Internet, and the disinformation and the propaganda he was putting out in the form of jokes was outrageous! And I would just tell Mr. Stewart that it really doesn't take a lot of courage to criticize Israel and trash Israel. It's done all the time. It's done by Israel's, quote, unquote, "neighbors." It's done in Europe right now, where Jewish stores and so forth are being burned down and there's riots. It's done in Boston and New York, where the police have had to come out and protect pro-Israeli rallies and so forth. So you're not really a tough guy. You're not really cutting-edge.

And the fact of the matter, Mr. Stewart, is that if Hamas had the weaponry that Israel had, nuclear weapons and other weapons, Israel would cease to exist. And if Israel wanted to take out whole communities in Gaza, or the whole Gaza strip, they could do so in about 30 minutes. And it doesn't.

This is the only country I know of that has thousands of missiles rained in on it, missiles coming from Iran through Hezbollah to Hamas, a country that agrees to a cease-fire that was negotiated by Egypt and the Arab League, and still has to tolerate these attacks. And even today, Sean, a missile came very close to Ben Gurion airport. They shut down the airport now to international traffic. The United States did. So now Israel is isolated in that way.

Can you imagine? The Gaza strip is relatively distant from Ben Gurion airport. The West Bank is very close. So what this demonstrates is Israel must never demilitarize or give up the West Bank because it will lose all control over its security!

HANNITY: Let me -- there is a serious side to all of this, and that is I think the world is missing some moral clarity here. And by that I mean -- you're right, anti-Semitism in Europe, anti-Semitism is now -- you know, we're seeing signs of it here in the U.S., New York, Boston. We saw signs of it in Canada earlier today.

And yet John Kerry and others are expecting Israel -- when you have 1,600 rockets fired into Israeli cities, what do they expect them to do? I mean, what if one rocket were fired into one town or one city or one state here in the U.S.? I know what I'd expect our president to do, take out whoever was responsible. I don't understand why they're -- this is not a morally clear issue for everybody.

LEVIN: Well, it is morally clear. That's why those who now pretend there's a moral equivalency or moral relativism are absolutely fools. And they're to be ignored or to be shamed.

If they don't wipe out Hamas and the Hamas missile sites, it's never going to end! And I would like to educate Jon Stewart and his clapping seal studio audience to let them know Hamas is an offshoot of the Muslim Brotherhood. Hamas also was part of the PLO. The PLO's history goes back to the mufti, goes back to the Third Reich, the final solution. Read up, Ivy League boy! Try and figure out exactly what's going on before you cut your stupid jokes!

HANNITY: Well, Hamas also has a charter, and in that charter, it calls for the destruction of Israel.

Let me pivot here and ask you about the president. He's out fund-raising. He's out playing golf. He's got his big vacation planned -- 180 rounds of golf. Meanwhile, you know, John Kerry is pressuring Israel not to defend itself. The president gives lip service to it. And then as it relates to Russia and the Ukraine, seems like the president's unwilling to really take a strong stand, knowing that, in fact, those Buk missiles came from Russia. Those technicians also came from Russia that fired at that commercial jetliner.

LEVIN: Look, everybody knows, particularly our enemies and allies abroad, what a weak president this is. This president can't seem to concentrate on his responsibilities. He thinks giving a speech is actually doing something. He thinks a few here and there punishment of some business or something will do something, while he is hollowing out the United States military, while our southern border is wide open to friend and foe alike.

This man is a disgrace! He's shameless! He'll be going off to Martha's Vineyard, where I understand they're not sending illegal aliens, as a matter of fact.

Of course, Putin is going to take advantage of Obama.  He sees Obama as weak. He sees him as a Neville Chamberlain type. So do I!

On the other hand, Putin is a fascist. He's an old KGB thug. He is interested in expanding Russia's power, and he's doing it. And he's not alone. Our enemies in the Middle East -- you see the caliphate forming there. You see red China taking over more and more of the South Sea, where the Philippines, Japan and even Vietnam are asking us for help.

HANNITY: All right, Mark Levin, "the great one," syndicated nationally, thanks for being with us. Appreciate it.