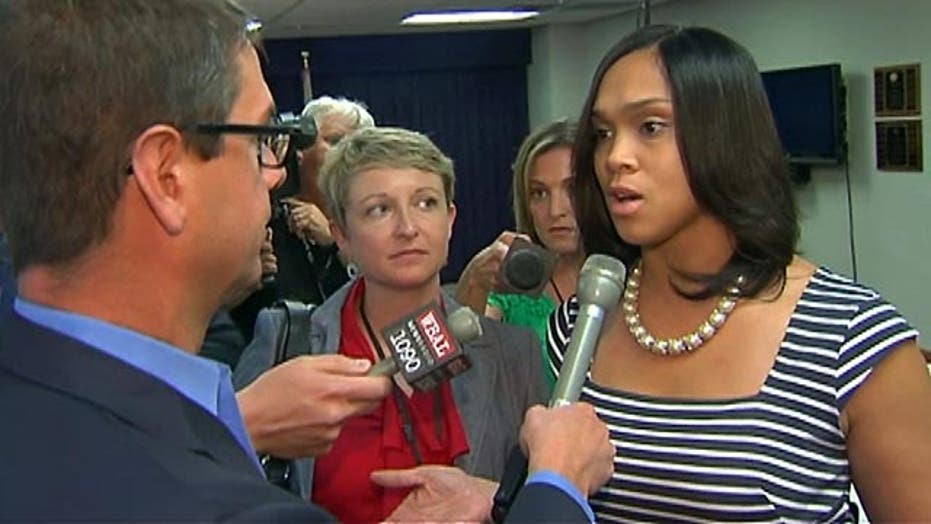 Mosby: 'Absurd' to think I don't have police officers' backs

Amid new calls to recuse herself from the prosecution of six officers charged in the death of Freddie Gray, Baltimore State Attorney Marilyn Mosby bristles at notion she's anti-cop

This is a rush transcript from "On the Record," June 10, 2015. This copy may not be in its final form and may be updated.

GRETA VAN SUSTEREN, FOX NEWS HOST: Big trouble for Baltimore city state's attorney, Marilyn Mosby. At this hour, a crisis in confidence at the Baltimore Police Department. And brand new calls for Mosby to step aside from prosecuting the case against the six Baltimore police officers. Now, they are charged in the arrest and death of Freddie Gray.

So, the critical question: Is the relationship between the Baltimore police and State's Attorney Mosby in complete meltdown?

ON THE RECORD's Griff Jenkins confronted Mosby in Baltimore.

GRIFF JENKINS, FOX NEWS INVESTIGATIVE CORRESPONDENT: Ms. Mosby, can I ask you a quick question? Cops have said you don't have their back. What would you like to say to them?

JENKINS: There have been calls for your recusal. Have you given any thought to recusal?

VAN SUSTEREN: And ON THE RECORD's Griff Jenkins joins us.

Griff, she wasn't particularly chatty with you.

JENKINS: She wasn't, Greta. I disagree with her. It's not an absurd question. She says she doesn't want to litigate this case in the media. She has an undeniable broken relationship between the state's attorney and police department at a time when the gang violence is spiral out of control, worse than it has been in a half century. That was a time for her to say something to rank-and-file cops who are speaking thought multiple news channels in newspapers saying we are afraid if we do our job we are going to go to prison. That is a very serious issue right now up there.

VAN SUSTEREN: She seems to think that if she comes from five generations of police officers that somehow absolves her from doing her job which is to repair the deep wound that she has inflicted on the police with some of her statements.

JENKINS: Listen, I'm not denying her the right that she comes from this generation. But what is in play right now is the fact that she or the report that she that she told the police to work gang violence specifically in the area where Freddie Gray was arrested and now six officers are charged. And they are trying to do their jobs. The news conference she was at today going after gang members in a joint federal local task force operation. That's still doesn't address the fact that cops are afraid to go out there and get the most violent criminals off the street tonight.

VAN SUSTEREN: It's like she's on the run. This memo that surfaced that shows she told the police Freddie Gray to ramp up and make sure you police the area, it didn't come out right then. It didn't come out during Freddie Gray. Clearly something she didn't want to come out. She won't talk to the police. She runs from the media. Any time she talks at the media or talks at somebody she is not doing interviews and people are calling for her to step aside on this case. She must be feeling the heat.

JENKINS: As you saw, she didn't want to talk to me about the drum beat that's getting louder for the recusals. You know, if you look at the whole thing, including the autopsy report, which she refused not only to release to the media but also to the police to do their own parallel investigation, it's hard to see anything as someone who comes from five generations of police officers, it's hard to see anything she has done supportive of them. And that opportunity that I gave her today was simply to say something to the thin blue line and she chose not to take it.

VAN SUSTEREN: I don't think she wanted to talk to you.

VAN SUSTEREN: I don't think she did.

So is Baltimore state's attorney, Marilyn Mosby, on the defense? You're going to see Griff's interview again.

But first, we will show you what happened just moments before our Griff Jenkins spoke with her.

JENKINS: Ms. Mosby, can I ask you a quick question? Rank-and-file cops have said you don't have their back. What would you like to say to them?

JENKINS: There have been calls for your recusal. Have you have given any thought to recusal?

KATIE PHANG, FORMER PROSECUTOR: I know. Poor, Griff. I heard the crickets when he is asking her questions. When she is asked a question he self-serving and self-promote she has no hesitation basically running her mouth. What's interesting is when she says I'm not going to comment instead of sticking with that idea that I'm not going to comment when she said that to Griff she kept on commenting she said it was absurd and said she came from five generations of police officers.

One thing I wanted to note, Greta, and Ted, is today when the ruling came out or excuse me when the state's response to the demand from lt. Rice's lawyers to get more specifics about what happened, the state's attorney's office had the nerve to put into a pleading that the possible jury poll should not be tainted by what is basically put on to the public. She is basically saying we are not going to put anything in the public. I'm going to talk to the public anyway when it's self-serving.

VAN SUSTEREN: Ted, is she just way over her head? Obviously she injected the politics into this in the beginning. And she has been very clumsy. Almost like she is over her head.

WILLIAMS: I think because we have seen a great deal of inexperience on the part of Ms. Mosby. She may have come --

PHANG: She should step aside.

WILLIAMS: She may have come from a generation of five generations of police officers, but, guess what? If Ms. Mosby wants to be fair to these police officers, and I don't know whether they are innocent or guilty, but she should step back from this case. I think a special prosecutor should be appointed, and I think she should recuse herself. She is too close to this case.

VAN SUSTEREN: There is a bigger problem besides just this case, Ted. I have gone to Baltimore with Griff and talked to police officers. You've been there. A substantial number feel like a substantial number of them feel like she is against them. That is her job is to repair that. And she is doing nothing about it but all she says is that I am from five generations of police officers as though that's some sort of like she can do whatever she wants, insult police officers and ruin the relationship.

VAN SUSTEREN: So what happens, Katie?

PHANG: Well, the one thing I would say about what Ted just said is it's not that she needs these officers in the community. The community needs these officers in the community. So she is basically breaching the duty that she owes to the people of Baltimore. If she is not going to do her job --and she doesn't have the integrity and honesty to step aside, then somebody is going to need it do it for her. I'm very interested in seeing what the court does when she finally responds to their motions to dismiss or motions for recusal.

Ms. Mosby, if you are watching this show tonight, I urge you to sit down with the rank and file. Listen to what they have got to say. They can talk back and forth to you and I'm sure that maybe you all can come to some kind of agreement.

PHANG: Absolutely. I think she is letting her pride get in the way. If you are going to sit down and talk to somebody, talk to the cops injured during the riots. Why don't you ask them how are they doing and how are their injuries because they were doing their job when they were injured when the city went up in flames. I think that she is too embarrassed to want to field the hard questions. And I think, again, she likes the self- aggrandize when she can say something that benefits her she has no hesitation speaking to the media.

WILLIAMS: Greta, over her head.

VAN SUSTEREN: Over her head.

Anyway, Ted and Katie, thank you.