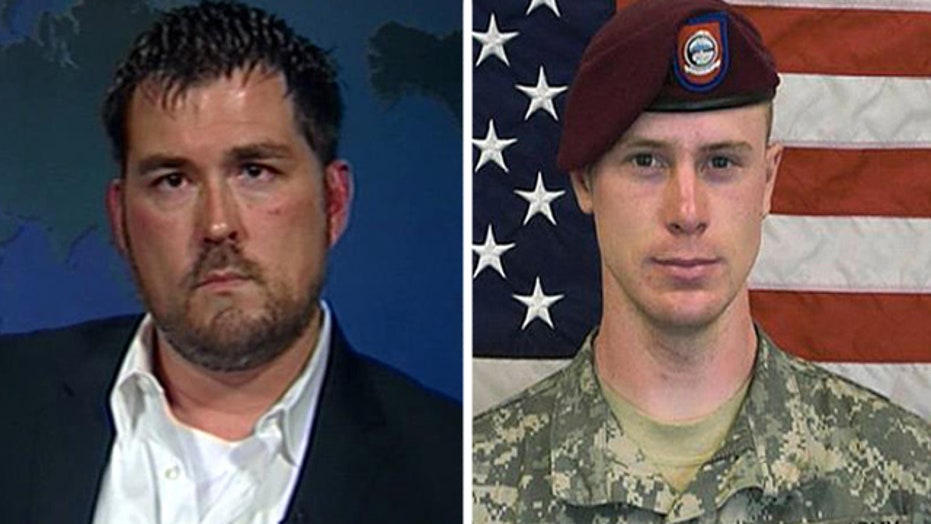 This is a rush transcript from "The Kelly File," June 9, 2014. This copy may not be in its final form and may be updated.

MEGYN KELLY, HOST: Developing tonight, new concerns for Americans are in more danger than we were before. With reports the terrorists have been emboldened by the release of the five Gitmo detainees in exchange for Bowe Bergdahl. One of the Taliban commanders in on the negotiations with America on the SEAL tells Time Magazine, quote, "It's better to kidnap one person like Bergdahl than kidnapping hundreds of useless people. It has encouraged people. Now everybody will work hard to capture such an important bird."

My next guest knows what the Taliban is capable of. Navy SEAL Marcus Luttrell was the lone survivor of an epic battle with the Taliban back in 2005 after sustaining numerous injuries he walked and crawled for seven miles until Afghan villagers helped him. His story became a Hollywood blockbuster.

Marcus Luttrell is here with us live. Marcus, thank you so much for being here. Let me start with that. Do you believe them when they say they that they are emboldened to capture more Americans like Mr. Bergdahl now?

MARCUS LUTTRELL, UNITED STATES NAVY SEAL: Sure, absolutely. I mean, you got to, you got to -- some of it is probably propaganda but you can almost bet that that's gonna happen. The way it works over there, if they see something go down that we, we released five of their guys for the one of ours. There's multiple groups out there and they're not stupid. I mean, they really combat effective, they're gonna know and they're gonna go after more people and demand more for their release is the way it works.

KELLY: You know, that may explain why so many of the military say that they are against this deal. Which just show the poll earlier in the show, something like 68 percent of veterans say, they think this was a bad deal. What do you think?

LUTTRELL: I agree with that. From a military perspective, it was a bad deal. I mean, we work real hard in getting those guys. I mean, they just weren't the bottom of the barrel, the IED in placers or anything like that. I mean, they were high-value targets. We spent a lot of time, a lot Intel going after these guys and get them at great cost to us as a matter of fact.

And the way the organization works, it's not built from the bottom up, it's built from the top up. So, you get the guys in there who know what they're doing and ought to put something together. The propaganda machine all the way to the tactics and they recruit and build on top of that, and the fact that they, I mean, very well could say Americans, you know, Americans had me for 12 years, they never broke me, I'm this guy, I'm back, follow me.

KELLY: You know, speak to us little bit about Bowe Bergdahl having been in not obviously the exact same situation but a similar situation and knowing that, you know, you might not get out. What goes through your mind?

LUTTRELL: Everything. Everything, staying alive one thing.

You're right, I mean, I can't attest to what Bergdahl went through. I wasn't out there for five years, it was there five days. So, I do know when the Taliban had me, it wasn't a good time. I don't think there was any plans on them just taking me out in there and keeping me and ransoming. The whole thing that they had going for me was they were trying to kill me the entire time, cut my head off, shoot me. If it wasn't for the villagers out there, I definitely wouldn't be here today.

KELLY: So, when you know that, and I can only imagine the fear, you're a trained Navy SEAL but you're also a human being. There had to be fear. When you hear reports about Bergdahl being tortured, being put in a cage, being kept in darkness. I mean, obviously that was for one stint of his captivity because later we are told that it got, you know, better. What goes through your mind like when you saw the tape of him getting onto the helicopter?

LUTTRELL: Sure, I mean, you got to break him first. When as soon as they capture him, it's not one man deal, they weren't immediately gonna trust him even if he did run out there and say I'm here to help. That's not how that works. I mean, they don't trust Americans. So, you can bet they worked him over real good. And the fear is there, absolutely. I don't care if you're a Navy SEAL if you're a private in the Army. He's scared to death I'm sure. The unknown is what it is, I mean, just any anticipation of death. It's always there at all times.

KELLY: Where are they taking me and what is next. I want to ask you this, he reportedly now it's not -- he doesn't want them to call him sergeant, he wants to go by private which is -- was the rank when he got taken. And he also is not speaking to his parents. It's been nine days since he's been back. He will not speak to his parents. The head of the medical facility where he is came out and said that's extremely rare, in fact, unprecedented his experience. All POWs who have come back to their -- that's the first thing that they wanted to do is speak to their family. How does it strike you?

LUTTRELL: Well, that's a little weird, I think. The first thing -- after I went through all my debriefing and immediately when I got back, the first person I want to talk to was my mama. I mean, absolutely and my brother and my dad, but just to get back to the family unit. Matter of fact, when I was there, my doctors came and asked me, you know, what can we do to make your better? What can we do to help you out? I'm like send me home, I wanna go home with my family. I want to get out of here. I don't want to be in a hospital anymore, I definitely want to be around people that I know, especially my family.

KELLY: It's such an incredible story. Listen, thank you so much for your service, Marcus. It's great to see you. All the best.

LUTTRELL: Take that one out. Yeah, close enough.

KELLY: All right. See you soon.