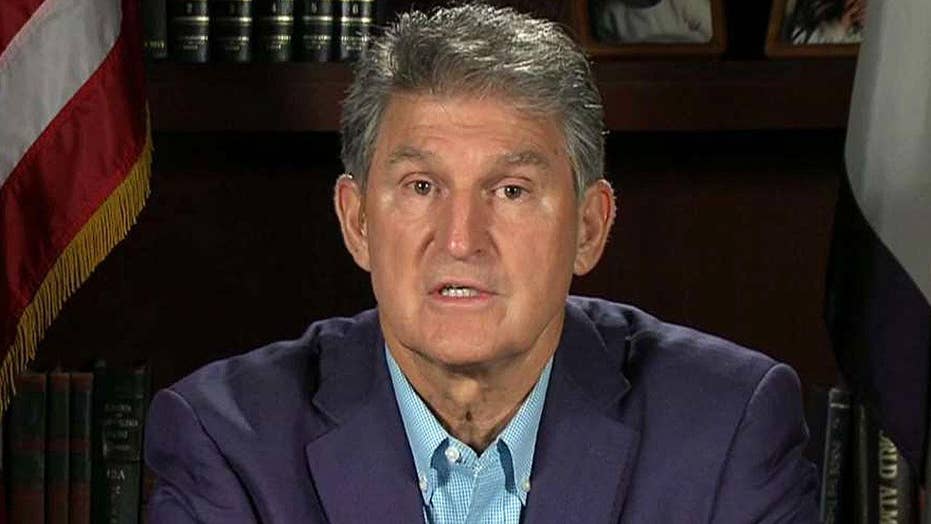 Manchin: We're all going to lose if we don't fix ObamaCare

On 'Your World,' West Virginia senator urges lawmakers to come together and work on health care reform

This is a rush transcript from "Your World," July 28, 2017. This copy may not be in its final form and may be updated.

NEIL CAVUTO, "YOUR WORLD" HOST: And I talked to one Republican strategist who said, you know, Neil, it always looks darkest before the dawn. Well, things can change, which is true technically. But right before the dawn, it's still very dark.

All right, meanwhile, this from Senate Minority Leader Chuck Schumer earlier today right after the vote.

SEN. CHUCK SCHUMER, D-NY, MINORITY LEADER: I would is to my dear friend, the majority leader, we're not celebrating. We're relieved.

CAVUTO: Wait a minute. You said you're not celebrating. Then how do you explain this? I don't know if you caught this picture. But it's a pretty interesting one. Do we have that, guys? We don't have. All right, take my word for it.

OK, with Elizabeth Warren, they're taking a selfie over this congratulatory rallying point for Democrats that the Republicans had failed.

So, for some, it certainly did give the impression that this was a big victory for them. And, of course, they were whooping it up in the middle of the morning last night or very early morning after this to do just that.

So, West Virginia Senator Joe Manchin on what signal that sends.

Can you hear me, Senator? What do you think of that?

I didn't see a senator last night. There's nothing to celebrate about. Nobody won or lost. If we don't get this fixed, we all lose. These markets will collapse. As we know, the private market is in a heck of a shape right now. And we have got to do something to stabilize that.

But, also, there needs to be reform. We have said that. You can't have these premiums going up the way they are with people that are out in the marketplace, and then have no restrictions whatsoever on the expansion that we did.

I think, if you want to be -- look at something that has happened, look at around the country and find out which states have tried different things. Alaska has the re-insurance. Indiana has done something great as far as the managed Medicaid expansion to control costs, but show people how to be more responsible, but use it in a more productive manner. A lot of good things can be done.

But, John, everybody is saying about John McCain. Let me tell you, John came in there and John voted to proceed. Let's get on the bill. If anybody has ever sat in a committee with John McCain -- I have been on Armed Services -- John has his markup on the NDA, national defense authorization bill. And he does it every year.

We get there for days. And we get sitting there, and everybody gets their chance. Everybody can put an amendment in. Everybody can debate it. And he gives everybody a vote on it. John believes in democracy. And he exercises it, because he works harder. He just cannot...

CAVUTO: But were you surprised, whatever your view...

CAVUTO: Were you surprised? And no one doubts the maverick that he is, and he's his own man, and certainly he's a hero in certainly my book, but that he did campaign in reelection to repeal ObamaCare, which has been a real onerous issue for his state and had championed that as a campaign theme.

And as tentative as this measure was, it was a vehicle to do just that.
So, did it look hypocritical?

MANCHIN: I didn't -- I didn't look at it as hypocritical, because John wants to fix it and repair it.

He just says, fine, repeal it, but at least give everybody a shot at it. If that is where everybody is going, then give them a shot. John just -- John rebuffed basically the process, or the lack of the process, I believe, Neil.

MANCHIN: The patriot -- the patriot that he is, he just -- you weren't going to budge John when he says, this is not fair. And that's really what it was about.

CAVUTO: Well, it is what it is. To your point, this is where we stand now.

CAVUTO: Now, what bothers me is when I -- there's a little bit of lecturing now going on, on the part of both sides blaming the other for the collapse of this.

But when the Democratic leadership, Senator, is saying that it's not trying to essentially rub the opponent's noses in the ground on this, and yet they're taking selfies and whooping it up and all of that, how are Republicans going to be disposed to be working with them if they don't trust them?

CAVUTO: No, by the way, you're right on this. Everybody does this. I'm not minimizing -- the hypocrisy knows no bounds or party loyalty.

But it's going to make it tough to work, right?

MANCHIN: I can just tell you this. Chuck Schumer -- Chuck -- well, not for me, it's not, because I understand human nature.

And the people that might have thought they won something last night, let me tell you one thing. That's ill-advised. You didn't win anything. And we're all going to lose if we don't fix it.

Quit being Democrats and Republicans, and be an American. It's time for us to come together. And the Republicans, God bless them, they tried everything they could to fulfill the promise they made to repeal. They couldn't get there. OK?

CAVUTO: Well, you know, Republicans say that Democrats have a funny way of showing that.

In other words, maybe there are guys like you who want to work with the other side. I know we live in a very polarized environment, Senator. I get that. I got it when it was that way when they were coming up with ObamaCare.

But the fact of the matter is, there does seem to be an unwillingness now to get anything done on a consensual basis.

MANCHIN: When I was governor of West Virginia, my great state, we brought everybody together. We got things done, because the people counted on us. And the people are counting on us tremendously now.

So, I'm going to work with everybody. If you look at my voting record, Neil, sometimes, I'm the only Democrat voting with my Republican friends if I think it's right.

MANCHIN: If I can come home and explain it, I will vote for it.

MANCHIN: A couple of weeks.

CAVUTO: All right, I apologize for some of the audio delay and problems here.