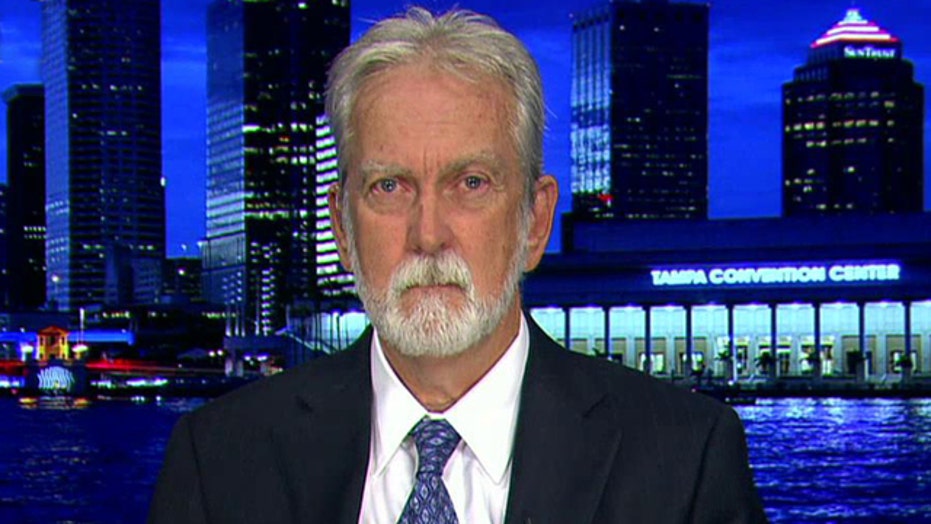 This is a rush transcript from "The Kelly File," December 16, 2014. This copy may not be in its final form and may be updated.

SEN. DIANNE FEINSTEIN, D-CALIF., SENATE INTELLIGENCE COMMITTEE CHAIR: The CIA's actions a decade ago are a stain on our value and on our history.

KELLY: The Senate report singled out the two CIA contractors who helped develop the controversial program, attacking both their motives and their methods. The report used pseudonyms Swigert and Dunbar. But the media quickly identified the man including Dr. James Mitchell as Swigert.  The Democrats suggesting these men were not fit for the job, writing, quote, "Both Swigert and Dunbar had been psychologists for the U.S. Air Force. Neither psychologist had experience as an interrogator, nor did either have specialized knowledge about Al Qaeda, a background in terrorism or any relevant regional, cultural or linguistic expertise." Of course, they did not speak with the men about any of that.

So, who is Dr. James Mitchell? Before working with the CIA, he served as a U.S. Air Force psychologist and helped create a program through which thousands of military personnel learned how to survive and resist interrogations. And the following is critical to understanding why the CIA needed this help.

In 2002, the CIA asked Mitchell to review a document that English police had found in the home of an Al Qaeda suspect. They called it the Manchester manual. It contained information stolen from the U.S. army, and Al Qaeda was using it to teach jihadists how to resist interrogations.

In the aftermath of the 9/11 attacks, as the CIA began to capture terrorists, it went back to Mitchell to help devise and manage an interrogation program. And ultimately, it asked him to do the interrogations. Among those Mitchell was asked to interrogate Khalid Sheikh Mohammed, the mastermind of 9/11.

Just 72 hours ago Dr. Mitchell could not talk about any of this, telling Vice News his nondisclosure agreement limited what he could say.

DR. JAMES MITCHELL, PSYCHOLOGIST INVOLVED IN CIA INTERROGATIONS: You know, I'd really like to respond to those questions, but I can't. I have a nondisclosure agreement. And until I'm released from that, I can't answer those kinds of questions.

KELLY: But now, he is talking, to Fox News. Speaking to "The Kelly File" last night, he confirmed his involvement in the interrogation of KSM.

KELLY: What condition was he in? What was he wearing? How was he restrained?

MITCHELL: I don't think he was wearing anything.

But in general what I remember about those first interrogations was that he was arrogant. That he was immensely arrogant.

KELLY: Did you feel like you were in the presence of evil?

MITCHELL: Well, I felt like I was in the presence of an evil man, that's for sure.

KELLY: When you're waterboarding Khalid Sheik Mohammed, understanding what he is and what he did, does this person's humanity, whatever amount of it there is, factor in at all? Are you conscious of it?

MITCHELL: Those techniques are so harsh that it's emotionally distressing to the people who are administering them. But even though you don't want to do it, you are doing it in order to save lives in the country.

Khalid Sheikh Mohammed has the opportunity to address the charges against him, but I don't. That's why I'm angry about this. They have a foregone conclusion. They put my life in danger. They put the lives of other CIA personnel and our families in danger for some sort of moral high ground?

KELLY: We've been trying to get you on the program for a week now.  You finally over the weekend said you'd do it. What changed?

MITCHELL: When you first started calling me, to be candid with you, I was very upset. I just -- I wasn't ashamed that I had been involved in the program. I'm proud of the work we did. We saved lives.

In fact, Khalid Sheikh Mohammed told me personally, your country will turn on you, the liberal media will turn on you. The people will grow tired of this. They will turn on you. And when they do, you are going to be abandoned. For me, I don't want to die because the Democrats in the Senate don't have the courtesy to ask the CIA to explain what they view as abuses that occurred when there's other evidence -- six million documents, and they cherry picked what makes their point out of it and put us in danger.

KELLY: Dr. Mitchell, take us back to when the program first began and the mind-set of the CIA and the interrogators who were actually charged with performing these enhanced interrogation techniques. What was the belief about the threat to the country?

MITCHELL: Well, they had ongoing information that suggests that they were trying to smuggle nuclear weapons into the United States. So there was credible evidence to suggest that there was another wave of attacks coming. And we couldn't have it happen. They tried to decapitate us the last time. They tried to destroy our civilization, and people were clamoring to do anything and everything they could that was legal to take it right up to the line and save American lives because that's what our government is supposed to do, save American lives.

KELLY: How much pressure did you feel you were under? And how was it communicated to you?

MITCHELL: Well, there were times, literally, when I was told that I'd lost my spine, that I'd become weak, that I must be starting to like these terrorists because I wasn't willing to ramp up the pressure. But you know what happened is, once that information -- those complaints got back to the people in charge, they very quickly moved in to put into place procedures so that when the folks in the field -- for example, they put in a procedure so that they wouldn't just willy-nilly start waterboarding people, because we were getting tremendous pressure from some folks to waterboard people that it wasn't necessary to waterboard them. And so the management, the leadership, the people in charge like Jose Rodriguez very carefully took charge of that right away. I think the leadership -- I think faulting the leadership is wrong.

KELLY: Now, one of the criticisms in the Senate report done by the Democrats is that you -- first they claim that you made $81 million on this program, and they claim that one of the problems in having you do it, doing the enhanced interrogations was, there was a built-in incentive for you to do more.

MITCHELL: The notion that I personally profited $81 million highlights the way they're trying to distort things. That was a commercial contract. It was let under government law. They put out a statement of work, I thought it was going to be an open bid. We bid on it as an open bid. They made it a sole source. It was evaluated to see whether the costs were reasonable. We made a bid in response to what they asked us to do. And it involved providing a lot of people who were embedded into that organization under the command and control of CIA officers and leadership.

MITCHELL: Well, the notion that I haven't had the proper experiences was dispelled by the CIA themselves when they replied to it. On page 11 of the CIA reply to that report, they say, he had the skills we wanted and listed them.

KELLY: One of the things the Democrats say is that there is evidence that the program did not work, that the intel you guys got from these guys in waterboarding them, et cetera, could have been gotten other ways and was, in fact, in hand despite or prior to those enhanced interrogation techniques. Your thoughts on it.

MITCHELL: It was clear that that program produced results. It's very easy in hindsight when you're not in the reality of the moment, when you don't have all of those pressures, to sort of look back from 2014 and see how the dots can be connected, sort of like people did after 9/11, when they second guessed what people were doing in real-time. You can look back and -- and then you can, you know, pretend that you're cleverer than they are. And it's much different going in the other direction, and what I would say is that it doesn't matter what they could have used that you can see now that the smoke has cleared and you've got five years to look at it.  It matters what they did use in real-time when lives were on the line and they were doing the best job they could do. And in my view, the CIA analysts and the CIA targeters are incredible. And to do this, to besmirch them is I think beyond the pale. You can tell it irritates me.

KELLY: Let's just go back to for example, the interrogation of Khalid Sheikh Mohammed. How does it work? I mean, I've heard you described it as a good cop, bad cop scenario.

MITCHELL: I did described it as a -- the bad cop goes in there and induces, you know, fear and panic, say, with the waterboard and does it in such a way that the person wants to avoid the waterboard the next time.  And as you are ending that session, you say to them, the next time we come back, we're going to ask you about this. Take the time that you have, pull yourself together, give some thought to this and if we can discuss this the next time, this won't happen again.

And so, that's the point at which the person begins to provide information. And if they begin at that point, there is no mention of enhanced interrogations in that Intel because they weren't used. You don't use them. So the point was to shift the person's priorities with the bad cop so that they engage with the good job to avoid this other thing. It wasn't to stand there over them pour water and say, tell me where bin Laden's courier is. You get all kinds of crazy answers like that. You know, when they say you can force a person being waterboarded to say anything, that's absolutely true. You ask leading questions and you hurt people and they'll say anything to get it to stop. But that's not what the CIA did, that's not what I did.

KELLY: Was it torture?

MITCHELL: Not in my mind. If it was torture, I would be in jail.  This thing was investigated over and over and over. I was told by the highest law enforcement agency in the land that we were going to walk right up to the edge of the law and that all the things that we had included in that list were legal. So in my mind -- and I know there's this controversy about whether -- can I just say --

KELLY: Did it feel like torture when you were doing it?

MITCHELL: You know what, ma'am, I felt like I was doing my duty. I didn't like it. I didn't enjoy it. I wasn't thrilled by it. I found it repulsive at times. But I sucked it up and did my duty to keep people from dying.