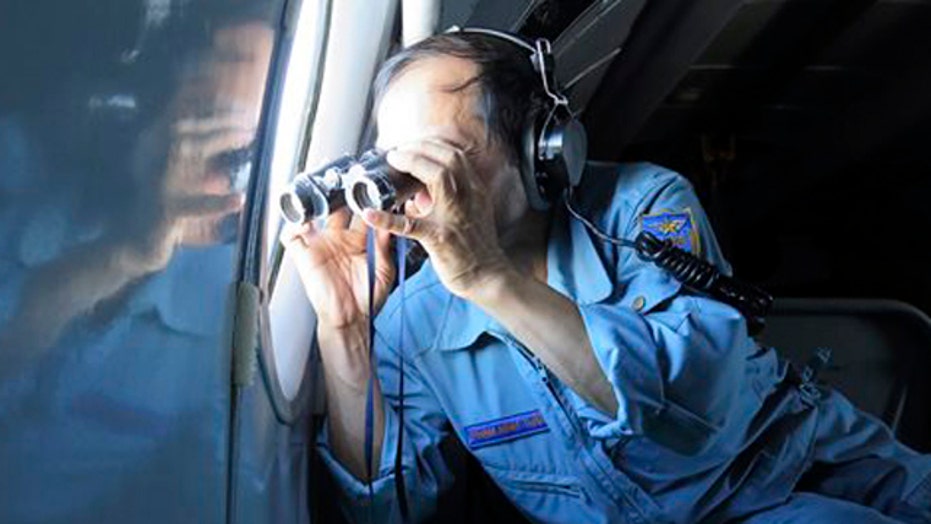 Report: Unclear if investigators have evidence this is terror-related

This is a rush transcript from "Hannity," March 13, 2014. This copy may not be in its final form and may be updated.

SEAN HANNITY, HOST: The question everyone keeps asking is, how is it humanly possible that a 777 aircraft just disappears for six days?

Now, my next guest is calling this the greatest aviation mystery in the history of airlines and insists that a 777 doesn't just fall out of the sky.

Guys, good to see you. Thank you all for being with us.

Dr. McGee, thank you. I agree, it's the greatest aviation mystery in history. And planes, 777s, don't just fall out of the sky, now, do they. And transponders don't go off by themselves.

DR. OLIVER MCGEE, AEROSPACE ENGINEER: Sean, this mystery is missing two things, the plane and patience. This simply -- this is baffling to aviation experts, and the consequences are absolutely extraordinary. We've never seen anything like this in aviation safety and security history.

I'd like to tap into Catherine's focus on the systems data that's coming in today. That systems data is going to look at the range to -- the flight velocity of this aircraft. And that gives us about an estimate of the time of travel when these transponders tapped off. And that time is based on three factors, the lift to drag of the Boeing 777, and on the other side, there is the weight ratio, the initial weight and the final weight. And then in between, you have this thing called impulse (ph) consumption of the fuel inside.

So once you multiply all of these three factors together, that gives you an estimate of the time. And that's why you see The Wall Street Journal article pointing to approximately about four hours of range in the other direction.

HANNITY: Well, all right, they're talking about four hours of range. But certainly, you get the reports that it was off course, off course significantly.

D.J. FROST, INTERNATIONAL COMMERCIAL PILOT: I have not flown the 777, Sean. However, my theory -- and this is what I shared on a Facebook post this morning -- was that I estimated there was about six hours of fuel, based on the route that they were going to take that day.

FROST: And based on that, maybe they did a turn, went at a lower altitude. Based on four hours, then, yes, there's a radius there that needs to be discovered.

HANNITY: Well, all of which is a possibility. But we know, A, the transponder was working and then it got turned off, right?

HANNITY: So that raises my suspicion level. Then it was so far off course, according to reports, if they turn out to be true -- and I -- we've got to be careful. I agree with your admonition, Dr. McGee, we don't want to jump to conclusions. But pilots have to turn off that transponder. The fact that nobody was able to track them -- it was 90 minutes before they realized this plane was missing from Chinese airspace. That is somewhat disconcerting to me because my experience with flight is you go from one traffic control center to another. Somebody's always monitoring your progress, right?

MCGEE: Absolutely. And more importantly, Sean, what you're raising, the larger question in systems thinking here. We need good, reliable information and data to come in so we can have some reliable knowledge and understanding about aviation safety and security on an international scale. And as long as we leave these questions open, this human story unfolds with the grieving families who are really hunting and searching for information about their loved ones. So --

HANNITY: All right, let me ask both of you this question. Is it true that -- and there was one report, somewhat obscure source, so I don't know -- that literally, the engines and some of the equipment aboard this airplane, with all the redundancy it has, that it actually sends out its own data, and that some of that data may have been received about how their functioning is at any given time and moment. Is that true about that airplane?

HANNITY: Wouldn't that pinpoint its location, then?

FROST: I don't know if it pinpoints the location. But it could pinpoint then the power usage of the airplane, if it was at full power, idle power, things like that. And also, it could -- also, I guess you could judge then what altitude it was coming in at based on the Eper (ph) setting, if they had an engine that had an Eper setting on it. So they can use those clues then to see what altitude it was flying at at that point also, within the route that it went off of.

HANNITY: I got to tell you, I -- I -- just agree with you, Dr. McGee, this is the greatest aviation mystery. And we need to get to the bottom of this because if something happened up in that airplane and we don't find out about it, then that means we're vulnerable in the future. That's scary for anybody. And we need to know an -- we got to get an answer to this, and I hope we will sooner than later.

Guys, thank you. Appreciate it.