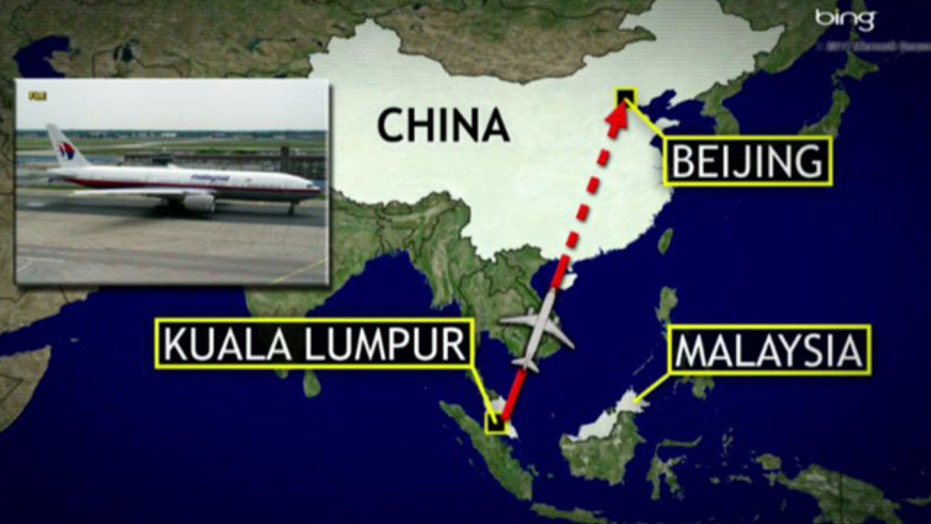 This is a rush transcript from "The Kelly File" March 7, 2014. This copy may not be in its final form and may be updated.

Disturbing news developing over the last few hours, a Malaysian airline aircraft apparently lost contact with air traffic control several hours ago. The Boeing B777-200 aircraft departed Kuala Lumpur in Malaysia a little before noon Eastern Time, and lost contact two hours into its flight as it was making its way toward Beijing, China.

The flight was reportedly carrying some 227 passengers, including two infants along with 12 crew members and was set to land some six hours after takeoff. Again, contact was lost two hours into the flight.

This is apparently the same kind of plane that went down in San Francisco last summer in a fatal crash in which pilots for Asiana Airlines apparently misjudged their landing.

We are awaiting at this hour in news conference with officials from the airline, we are told that will take place at any moment. And while they are reportedly working with search and rescue teams to locate the aircraft, they still have no idea they told us of its whereabouts. They say they are already also notifying the next of kin of all of those passengers and of the crew.

We are waiting a press conference. We are watching. You can see the video feed come back. We're getting information now. Now I'm being it's in progress. It is not in English, so we have to wait for the translation.

But we're going to be joined right now by David Piper, our own reporter who is live in Bangkok with us on the phone with the very latest -- David.

DAVID PIPER, FOX NEWS CORRESPONDENT (on the phone): Hi, Megyn, yes, Malaysia Airlines has confirmed as you said that they lost contact with flight MH 370. Now it was on the route from Kuala Lumpur to the Chinese capital Beijing. Now, the Boeing with 777-200 was two hours into its flight when they lost contact. The route is usually over the sea and part of Vietnam at that time. And Reuters is now reporting that radar contact was lost was over Vietnam's air space. The flight was carrying 227 passengers including two infants and 12 crew members. Malaysia Airlines says it's currently working with the authorities who have activated the search and rescue team to locate the aircraft.

It is a regular flight from the Malaysian capital to Beijing. People flying that route would likely have family or business connections between the two countries or are tourists. Now, the Boeing 777-200 is a long range aircraft powered by two engines. It's in service with many airlines in Asia and around the world. Malaysia Airlines has a very good safety record and has upgraded many of its jets recently. It's chief executive has issued a statement in the last half hour, saying that their thoughts are with all the affected passengers and crews and their family members. Megyn.

KELLY: David, thank you. Yes. Reading that now, the exact quote is, "Our team is currently calling the next of kin of passengers and crew... focus of the airline is to work with the emergency responders and authorities and mobilize its full support," going on to say, "Our thoughts and prayers are with all affected passengers and crew and their family members."

The 777 we are told has not had a fatal crash in its 20-year history until that Asiana crash in San Francisco in July of 2014 (ph) which had a few fatalities associated with people coming out of the plane when the back of the aircraft broke off upon landing, attributed to pilot error at the time.

So, as we wait for translation now from the information that we are getting from the authorities, we try to figure out what happened. All we know at this point is that the flight took off this morning at around 11:41 a.m. Eastern Time. And two hours into its journey it disappeared, according to the authorities, disappeared from radar. Some officials had been suggesting earlier that it was about approximately 35,000 feet at the time. We have not yet been able to independently able to confirm that. That it began to level off and that that contact was lost and has been lost ever since.

If you look at the map, the journey, the route from Kuala Lumpur to Beijing is mostly over land. And again, Reuters news agency reporting that the flight was lost over Vietnam. And that is all we can tell you in terms of the geography and the search which we understand remains in progress at this time.

Joining me right now by phone is Robert Mark, he is a corporate commercial pilot who hopefully can shed some insight into this. Robert, good to have you here with us. Airplanes don't just disappear from the sky.

ROBERT MARK, FORMER CORPORATE PILOT (on the phone): No, absolutely they don't, Megyn. And that is probably the most frightening part of this event, is that very much like when the Air France aircraft disappeared over the South Atlantic five years ago. For the crew not to even have had enough time to get off an emergency call, what we call in the industry a mayday call, is extremely frightening. Because there is enough backup systems on this airplane that if it was an electrical problem they would have had plenty of other options.

KELLY: So the fact that air traffic control -- this is according to the airline officials. The air traffic control lost contact with the aircraft two hours into the flight then tried to communicate by various means, that also was from an airline official. But they are not reporting any mayday call or any other reports of problems on board the aircraft. Tells you what?

MARK: Well, it tells you that there was some sort of a catastrophic failure. And whether you know -- exactly what that was I do not know what the weather was like at the time in the area. But there are only a few options that could have done that. And again, if the aircraft at this point is certainly long out of fuel because it should have landed in Beijing probably three-and-a-half hours ago.

KELLY: Let me just jump in, because the official from the airline has said that this aircraft had about seven hours worth of fuel. By my calculation that would have ended at about 7:50 p.m. Eastern Time, which is right about the time they came out with the information, publically.

MARK: Correct, and that is when they finally realized that it didn't matter what was going on, if they had not heard from the aircraft in the air or from the crew on the ground saying they had an emergency somewhere and landed somewhere else, that there was probably not a great deal of hope that they're going to find the air flight in one piece.

KELLY: Is there any, I mean, obviously whenever you suspect an aircraft may have gone down, and we don't know what has happened in this situation yet. Is there any reason to think terrorism outside influence on this aircraft?

MARK: Well, I mean, as I said earlier there are only a couple of reasons that an aircraft would go -- as we call -- go completely dark and just you know, disappear out of the sky with no radio, no radar, nothing. And certainly there could have been an explosion on board. For whatever reason, we don't know. But again, there is not very many causes that could have been so catastrophic that this crew couldn't even have gotten off a radio call.

But the one thing we do know is that with them having spoken to air traffic in the Vietnam area, we at least know where they were at their last report, because aircraft -- we're required to give -- report updates on the route as we go. So at least if they know where the last report was that they actually had communication with the airplane and they know how fast it was going, they will have some idea of the radius that they're going to need to search but it could be quite large.

MARK: Well again, we saw very soon after the Air France aircraft went down, the Air France -- the air bus was transmitting mechanical maintenance data back to its maintenance base at the time of the accident. We may find at some point that this aircraft was also transmitting some sort of data back down to the ground, that air traffic may not have seen because they wouldn't normally be privy to that kind of information anyway. Right now it is probably a little too early to tell.

KELLY: And so in the absence of, you know, knowing exactly -- because they're not coming out and saying we believe the jet is down. They waited until they -- it appears they waited until they knew the jet would have run out of fuel before they went public with the information. How did they start at this point, Robert, investigating where the aircraft is? In other words, how do you do a search and rescue for an airplane?

MARK: Well, I mean, again as I said we have these reports that we're required to give either through electronic means on the radio. They're digital or sometimes they're voice calls where one of the pilots will pick up the radio and say you know, Malaysian flight 370 is at this point at this altitude at this time. And we are expecting to be at the next point 200 miles down the road in 20-something minutes. And if they don't show up at that second point you would start your search at the last place that you had positive communication with them.

MARK: But again that doesn't mean that they didn't turn off course somewhere and go in some other direction that air traffic may not have been able to see. Because it is just -- again, there are just too many unknowns here. But again, the fact that they didn't even get off a radio call is what makes this really an ugly situation.

KELLY: On the fuel issue, and the airlines saying that this jet only had several hours-worth of fuel and we're now about an hour and a half past that. Again, it would have been about 7:50 p.m. Eastern Time by my calculations.

MARK: There are only two options when you say that. Either the airplane is down because it is out of fuel or it landed somewhere with fuel and they have been unable to make any kind of contact with anybody on the ground anywhere. So those are really the only two possibilities at this point.

KELLY: It is a grave situation, obviously.

KELLY: And the airline seems to recognize that in terms of its tone, offering its thoughts and prayers to those who have been affected, the passengers and crew and family members. And yet, we await the official news. Robert, thank you.

MARK: You are always welcome.