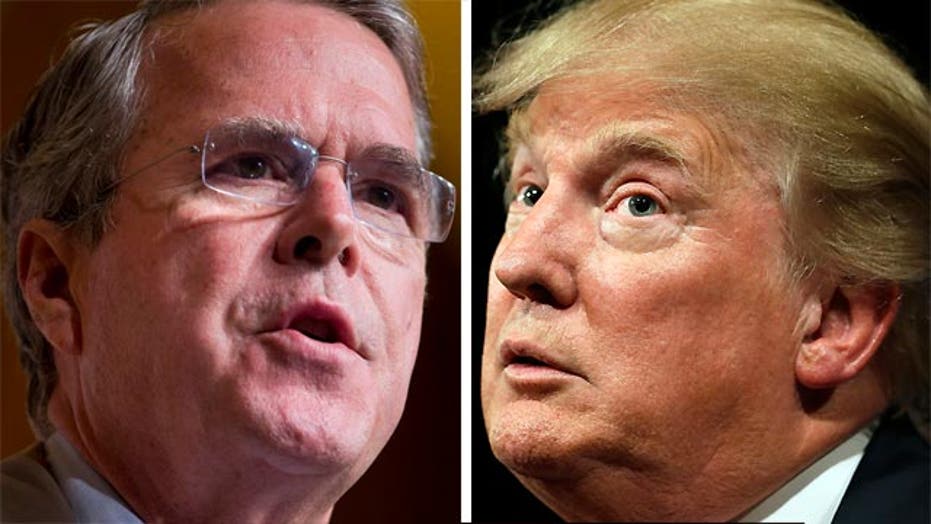 Looking for room in a crowded GOP presidential field

This is a rush transcript from "Special Report," June 19, 2015. This copy may not be in its final form and may be updated.

JEB BUSH, REPUBLICAN PRESIDENTIAL CANDIDATE: My belief is that religious freedom now is under attack in ways that we've never seen before.

GOV. CHRIS CHRISTIE, R-N.J.: It becomes much harder to be pro-life when they're drug addicted on the floor of a jail cell. That is a gift from God as well.

DR. BEN CARSON, REPUBLICAN PRESIDENTIAL CANDIDATE: I fell on my knees and I just said, Lord, unless you help me, I'm not going to make it.

CHRIS WALLACE, ANCHOR: Just a few of the Republican presidential candidates speaking at the Faith and Freedom Forum today in Washington. We're back now with the panel for the Friday lightning round. A busy week in politics. Jeb Bush got into the race. So did Donald Trump. There were a couple of candidate forums, one of them right there, the Faith and Freedom Forum. Charles, what was the biggest development and why?

CHARLES KRAUTHAMMER, SYNDICATED COLUMNIST: The biggest news, without a doubt, was the Bush launch, Jeb's launch. It was unexpectedly good, energetic, and his strategy is an interesting one. He is he sort of well-known, so-called establishment, considered not conservative enough. He is running as an outsider, as the guy who is going to be coming into Washington and reforming it, which is exactly the right strategy. And I think he got quite a good bump out of that.

WALLACE: Kirsten, Trump is already attacking quite openly some of his rivals from Bush to Walker to Carly Fiorina. How big a headache is he going to be for the GOP this year?

KIRSTEN POWERS, USA TODAY COLUMNIST: I think is he going to be a huge headache because there is no filter. He says whatever comes into his mind. And he turns it into a bit of a circus. And I think the GOP was doing a good job, not that they have any control over it, but this time around it's a pretty serious group of people and you weren't having this clown car overlay which I think he really brings to the race.

TUCKER CARLSON, 'FOX & FRIENDS' CO-HOST: Totally. I mean, look, on the question of Trump. He is filling the role that Newt Gingrich filled in the last cycle, a guy who, you know, has his opinions. Some of them are kind of interesting. Some of them are right, by the way. He can say exactly what he wants. I think it could potentially be a problem. I agree with Charles 100 percent. Jeb Bush has positioned himself as an outsider. Whether that's basically a plausible question or not is another question, but it's the right place to be.

WALLACE: Brian Williams got a job back at NBC, but it wasn't his old job. He's out as anchor of NBC nightly news. He's going to be a breaking news anchor at MSNBC. And today he tried to explain his repeated falsehoods. Here he is.

BRIAN WILLIAMS, FORMER NBC NEWS ANCHOR: What happened is clearly part of my ego getting the better of me, to put myself in a better light, to appear better than I was. That's the process here.

WALLACE: Tucker, what do you think of his explanation and of NBC's decision?

CARLSON: He went to the confessor in chief Matt Lauer. I'm rooting for Brian Williams. I like Brian Williams. I think he is a decent guy.
The ugliest moment in his life was caught on tape. I feel bad for him. I also feel bad for the Trotskyites over at MSNBC. He's moving there.
They're not going to be there longer. Clearly they're going to change that channel. Some people are going to be out of their jobs soon.

WALLACE: Kirsten, what do you think of his explanation, and do you think he handled it in a way that he has kind of put an end to the story?
How well did he control the damage?

POWERS: First of all, I think NBC controlled the damage. They punished him. They took him off the air. He has shown contrition. He has given an explanation. And I think we are a forgiving country, and people do feel like let's give him another chance. I think it's good for MSNBC to have him there. I think, in the end, you know, it's probably a net plus.

KRAUTHAMMER: I thought, you know, we don't want a pound of flesh. I don't believe in the death penalty, the real one or the vocational one.
It's good he's getting a chance. I'm rooting for him as well.

WALLACE: OK, winners and losers of the week starting with Tucker.

POWERS: My heart is breaking.

CARLSON: Everyone is talking about Donald Trump.

KRAUTHAMMER: I don't think he meant it.

POWERS: My loser Donald Trump because.

WALLACE: The classy Donald Trump is your loser?

POWERS: The classy Donald Trump is my loser because I think he already by his very -- the low bar that he normally rises to has managed to outdo himself with this ludicrous, diabolical announcement. So, I mean, I just -- I just think he was --

WALLACE: I think the truth is somewhere between classy and diabolical.

POWERS: My winner is the family members of the people who were slain in South Carolina for coming out and really showing true Christianity and saying that we forgive you.

WALLACE: Extraordinary scene. And talking directly in that TV screen to Dylann Roof. Your winners and losers?

KRAUTHAMMER: My winner is the penguin who escaped the Georgia zoo when the flood wiped out the enclosures and liberated all 600 animals. He was found in the --

WALLACE: Let's make it clear. The flood liberated the animals. It wasn't the penguin.

KRAUTHAMMER: No, no. He is a strong penguin but he's not that strong. He was found in the neighboring country of Azerbaijan having swum 50, 60 miles to freedom. Sort of "Unbroken 2. "

WALLACE: Maybe he walked it?

KRAUTHAMMER: No. Penguins tend to swim when it's a distance. The co-winner is the zoo hippo who was found wandering through the streets of Tbilisi. He was tranquilized, brought back to the zoo, and then went into what Radio Free Europe has called, quote, "a depression," as you would as well if you were tranquilized and woke up in the hippo enclosure in the zoo. But he is recovering and is eating again. That's the good news.

WALLACE: I'm for one am relieved. We don't have time for the loser, and, frankly, who cares after those winners?