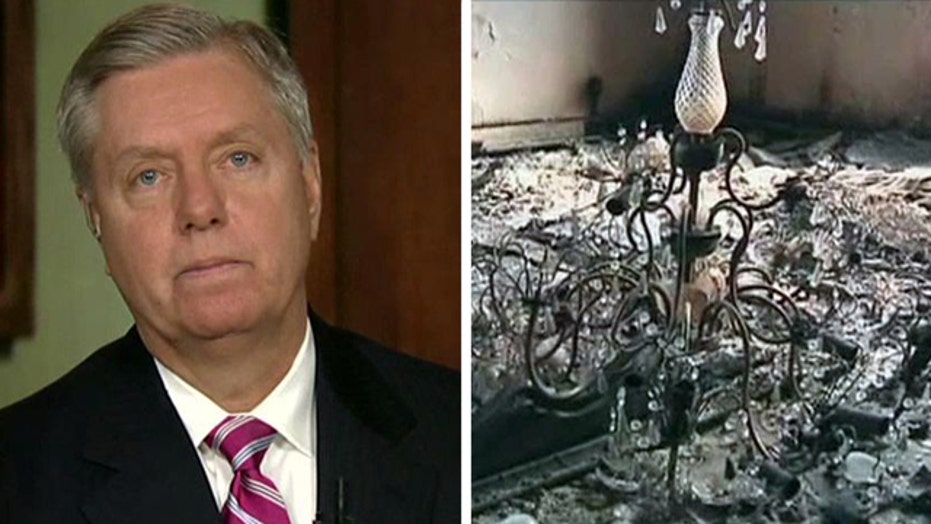 This is a rush transcript from "Hannity," January 16, 2014. This copy may not be in its final form and may be updated.

SEAN HANNITY, HOST: Now, earlier today, on the Senate floor, my nest guest made a passionate plea for Congress to dig even deeper for answers, and is also questioning why the former secretary of state hid behind Susan Rice in the immediate aftermath of this deadly assault.

SEN. LINDSEY GRAHAM, R-S.C.: She couldn't be on TV to talk about what happened at the State Department because she was distraught? I don't buy that! Does anybody believe that about Secretary Clinton? And if it's true, it's something the American people need to consider. I don't believe it's true. I don't believe she was incapable of going on television, as Susan Rice says. I believe they picked a person very loyal to the president who would say whatever that needed to be said. And what she said was so far away from the truth, it needs to be investigated!

And here with reaction, the man you just heard from, South Carolina Senator Lindsey Graham. Senator, welcome back. Good to see you.

GRAHAM: Thank you, Sean. Thank you.

HANNITY: All right, this is -- we're now learning -- this is a before, during and after controversy for the Democrats.

HANNITY: Before, we learn in the Senate intel report that had they taken the advice, counsel and plea from Ambassador Stevens and others to provide security...

HANNITY: ... this could have been prevented. We learned that. This has now been investigated, correct?

GRAHAM: Right. On 16 August, Ambassador Stevens sent a cable to Washington requesting additional security because the Al Qaeda flag was flying all over Benghazi. There were 10 Al Qaeda training camps. They couldn't protect the consulate from an attack. And on June 10th, the consulate had been attacked.

HANNITY: Now, we also learned this week -- and I think this is probably as disturbing as anything because it magnifies the intensity and the premeditated lie that followed thereafter...

HANNITY: ... but we also learned this week that, in fact, while the raid had just begun, that the top military advisers of the president were informed this was a terrorist attack.

HANNITY: And they knew that going into a meeting that day with the president when they informed him. Is that all true?

GRAHAM: Absolutely. General Ham happened to be in Washington. He got a report in real time, "The consulate is under attack, a terrorist attack." I've talked to my first survivor. He said he saw 16 to 20 armed people come through the gate. There was no protest outside the consulate. They were carrying a banner in Arabic, later identified to be the banner of Ansar al Sharia. General Ham tells Panetta and Dempsey. They go to the White House. The informed the president of a terrorist attack.

On the 15th, 16th and 17th of September, the FBI in Germany interviews every survivor of the attack at the consulate. Not one of them mentioned a protest. They all said it was a terrorist attack and named the al Qaeda affiliates involved.

HANNITY: But it goes deeper because the CIA knew...

HANNITY: The CIA knew within three or four days that they had the videos that showed...

GRAHAM: Within 24 hours, it was reported as a terrorist attack. And here's my question. How could the president of the United States two weeks later say it was a protest caused by video? And where was the intelligence community? Remember when Greg Hicks said he almost threw up, his heart was broken, he was stunned when Susan Rice said there's no evidence of a terrorist attack, this was a protest caused by a video? Why didn't somebody at the CIA who knew better pick up the phone and call the White House and tell the president, "Quit lying about Benghazi?"

GRAHAM: There's so much to be unearthed yet.

HANNITY: All right, so they knew within 24 hours there was no protest going on.

HANNITY: But then Susan Rice did the five Sunday shows. Then a week after...

HANNITY: ... the president goes before the United Nations. Now, then we've got the cover-up before, during and now after.

HANNITY: And after, this narrative emerges...

GRAHAM: The FBI had in their possession on the 15th, the 16th and the 17th, interviews of every survivor. Not one of them said there was a protest. They all said it was a terrorist attack.

Now, why did Susan Rice jump the gun? Why did she tell the American people this was a protest caused by a video?

GRAHAM: Because if the truth had come out seven weeks before an election, about an Al Qaeda attack...

HANNITY: Would have been devastating!

GRAHAM: ... you could see coming for months about where the people in Benghazi were telling Washington Al Qaeda is all over Benghazi and nobody helped them -- and if -- if Hillary Clinton was too distraught to appear on television on the 15th of September -- and I know she had to be distraught -- is she really capable of being commander-in-chief? If that is true -- and Susan Rice has said this twice. The reason Hillary did not talk about what happened in Benghazi -- she's in charge of the consulate, not Susan Rice -- is because she was too distraught.

HANNITY: All right, so this now...

GRAHAM: Now, does that -- that -- does that make sense? If it does, should she be running for president?

HANNITY: All right, now that brings me to my last and final question because we got the before...

HANNITY: This request was given to the State Department, was never given the support they asked, during, no help was sent.

HANNITY: Then the lie and the cover-up, now proven afterwards...

HANNITY: ... but yet -- yet in this Senate Intelligence report, they mentioned Hillary one time. Dianne Feinstein said any culpability for Hillary is just false.

HANNITY: Is this designed to protect her for a 2016 run?

GRAHAM: I don't know what it's designed to do, but I can tell you what it didn't do. It did not shed any light on how she could have not known it was a death trap. How could she not know what was going on in her own consulate?

And let me tell you this. It didn't say one word about the president of the United States. If, in fact, the secretary of Defense told the White House in real time this was a terrorist attack and if every survivor told the FBI it was a terrorist attack, how could our president for two weeks tell the world it was a protest caused by a video seven weeks before the election? We're just starting on Benghazi!

HANNITY: No, but I want to hear from the people on the ground that were there...

HANNITY: Why can't we hear from them?

GRAHAM: They won't give us the witnesses. I finally got one witness almost two years after the attack. And I tell you, my friend, the story of Benghazi is penetrating. Chris Christie is taking accountability for what went wrong on his watch and he fired people. Name one person who's been fired for Benghazi? Name one person that...

GRAHAM: ... is held accountable for four deaths, for lying and lying to the American people about what happened to the four brave Americans.

HANNITY: Unbelievable. All right, Senator, we're going to stay on it. Somebody has to investigate.

HANNITY: Got to get to the truth, or else you can't fix it. Appreciate it.