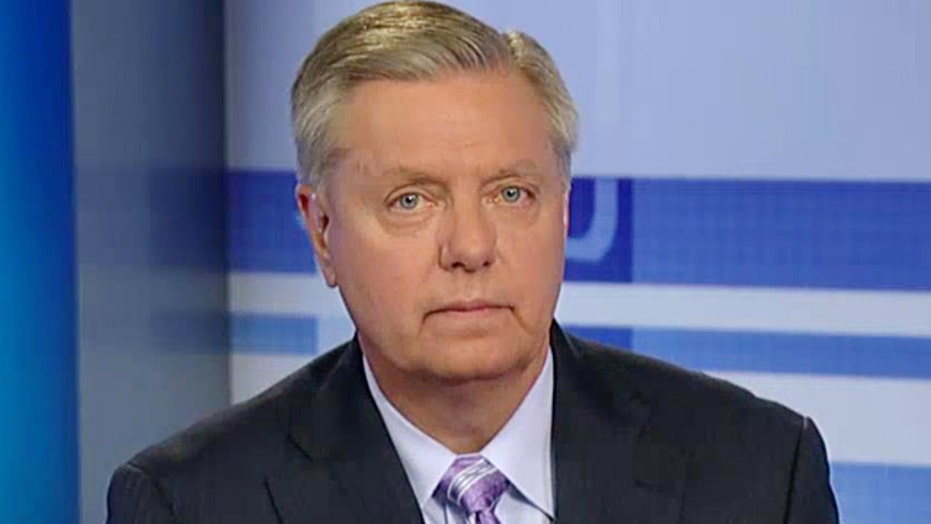 ISIS terror cells in US: Has 'new phase' of war begun?

ISIS brags it has scores of

This is a rush transcript from "On the Record," May 6, 2015. This copy may not be in its final form and may be updated.

GRETA VAN SUSTEREN, FOX NEWS HOST: New claim that ISIS has terrorist cells in 15 states, five of which can be named. The challenge: What can be done to stop this savage terror group?

Good evening, sir. And we don't know for sure, but Virginia, Maryland, Michigan, Illinois, California - what are we to do?

SEN. LINDSEY GRAHAM, R-SC.: Stop the budget cuts that eventually will hurt our ability to detect these attacks. What does Paris and Texas have in common? The people who did the attack in Paris and Texas were on a watch list. Our system is failing. What keeps me up at night more than anything else is system overload. So if President Obama doesn't take the fight to these guys in Syria and Iraq, to disrupt their networks, they are going to here. The longer they are able to stay organized.

VAN SUSTEREN: It sounds like if you listen to them -- and I don't want to have mass hysteria. It sounds like if naming five states and if you have got these sorts of connections, I don't know if it's inspirational or direct command and control. It sounds a little bit like they are here. And we have got the problem is it doesn't -- it's not like you have to go through JFK with a passport. You do it through the Internet.

GRAHAM: Not only are they here, but the numbers that could come here are growing exponentially, 1,000 foreign fighters a month are going to Syria, to join ISIL because they are perceived to be winners. I talked to the president of Kurdistan today, Brzezinski, asked him do you see a strategy on anyone's part to deal with ISIL in Syria? And he said no. Does that worry you? He says yes. We can't keep Iraq together unless you deal with Syria. If you ask me the next mass casualty event to come to our country, which I think is highly likely, it's one of these foreign fighters and their friends who have gone to Syria, to be trained to come back here with a Western passport. Our system is being overloaded. Those on the front lines are doing the best they can, but President Obama's foreign policy has failed on multiple fronts it is only a matter of time now, I believe, unless we change our policies that we will have a big attack in this country directly related to Syria.

VAN SUSTEREN: All right. So, two problems. One is we have to protect ourselves here and, secondly, it would be nice to sort of nip it in the bud in Syria so it doesn't come here.

VAN SUSTEREN: What has this sort of accelerated foreign policy? What can President Obama do at this point? It's metastasized at this point.

GRAHAM: It has. It's a cancer that's growing everywhere. Syria could eventually take the king of Lebanon down. War in Syria is a cancer in the region. If I were president, here is what I would do. I would talk to the Arabs and say, listen, we are going to go in on the ground together. You will be the largest part of the force. We will provide you some force to do things you can't do. We are going to destroy and degrade ISIL, hold the territory, and we are also going after Assad. As long as Assad is in power, you are not going to fix this problem. Terrorist groups today are large, rich, and entrenched. What we need to do is make them small, poor, and on the run.

VAN SUSTEREN: What happens when the sanctions get lifted on Iran and suddenly Iran is rich --

VAN SUSTEREN: And they are the sponsors of terrorism? Now they are going to be richer.

GRAHAM: You talk about giving gasoline -- putting gasoline on a fire, I can't think of a worse outcome than allow the Iranian regime $50 to $100 billion to pour into the wars they are sponsoring. They have taken the pro-American government in Yemen down. The Houthies are backed by the Iranians. If you ask me, other than Syria, where is an attack likely to come from against the United States? Al Qaeda in the Arabian Peninsula that resides in Yemen are more lethal to the American homeland than ISIL. And we he have no presence in Yemen anymore because the Iranians took down the pro-American government. President Obama's policies are failing. The Iranians are on the march and we are becoming exposed here at home. And if we don't change this and if we don't change our policies, it's only a matter of time until we get hit hard.

VAN SUSTEREN: Actually, I want to add to this. I think Sudan is a big problem for us. I never hear anyone talking about Sudan.

GRAHAM: You can't keep up with the number of threats. One thing in common. Radical Islam is running wild and we don't have the strategy to contain it, and that's a formula for disaster.

VAN SUSTEREN: Senator, thank you. Nice to see you, sir.