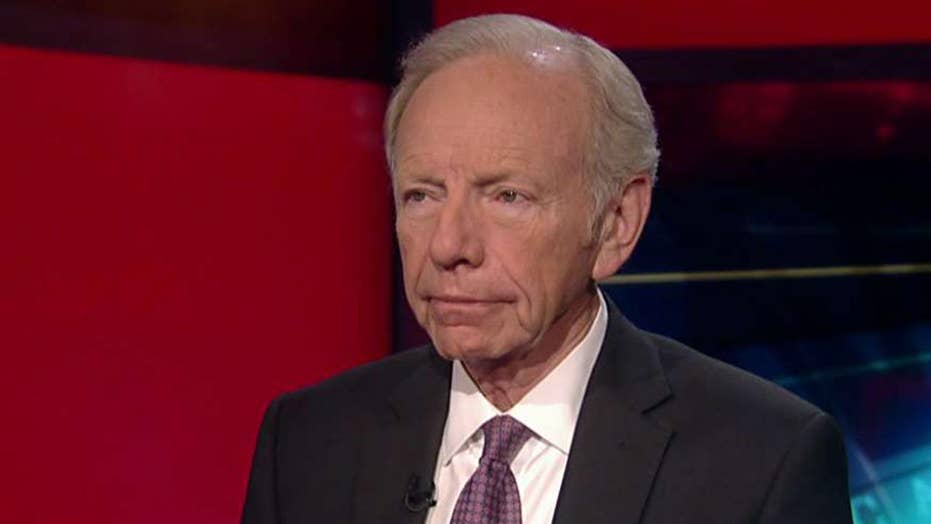 Lieberman: 'Bad guys' dominate when they don't fear the US

This is a rush transcript from "Your World," May 15, 2017. This copy may not be in its final form and may be updated.

SEN. JOSEPH LIEBERMAN, FORMER SENATOR: You too you, Neil.

CAVUTO: Obviously, whatever we do -- and we're trying to work the China card to have the North Koreans ease up on this stuff. They don't.

CAVUTO: So, is China doing enough? What do you make of that?

LIEBERMAN: China has done a little more since the meeting between President Trump and the Chinese leader, Xi Jinping.

They stopped the coal business with the North Koreans. They're putting more pressure on them. But the North Koreans keep going ahead. And they're intent -- everything they have done -- this latest test seems like a significant one. That missile...

CAVUTO: Do you think China is just stringing us along, though, Senator? We're trying to work with them. They promised they were, so we kept them off on an unfair trader list or whatever.

I think -- whether they're stringing us along, I don't think they're really ready to squeeze North Korea as they uniquely can. And, at some point, if they don't, we have to then consider sanctions against Chinese banks that are doing business with the North Koreans.

LIEBERMAN: In other words, if you're doing business with North Korea -- this is like on the model of Iran -- you can't do business in the United States of America.

CAVUTO: What if North Korea can't be influenced? What if they -- it was only a week or two ago they were going after the Chinese. They're your lapdog, essentially, for the Trump administration.

CAVUTO: What if China can't control this?

I mean, you have got to remember, this is a fanatical leader of a country where some people are living well, but most are living terribly.

LIEBERMAN: And he's spending an enormous amount of the wealth of the country building nuclear missile capability, missiles and nuclear weapons to go on, and threatening us.

This makes him a world power. And at some point, we, not alone, but certainly together with our allies in the region, particularly Japan and South Korea, are going to have to decide whether we have to do more than squeeze the North Koreans and Kim economically, but whether we have to take military action.

Now, that is a tough, tough decision.

CAVUTO: What would be military action?

One analogy has it that if they launch another missile and we shoot it down, that would be a provocative act on our part, or the source of these missile launches, or shooting it down over land. You know all the drill.

CAVUTO: That any one of those acts would be provocative, even though we're responding to their provocative act.

LIEBERMAN: Right. I mean, it's possible we could -- this wouldn't be all- out war, but we try to knock out one of their military buildings, maybe one of the buildings...

CAVUTO: And how would they respond?

I mean, this is really an unpredictable leader in Kim Jong-un. They have a massive army. They're in close range of Seoul, Korea, South Korea.

And it's possible that that would trigger a land war on that -- in that part of the world, which nobody wants.

LIEBERMAN: So, then what do you do if you have got this menace building? He's trying to get to a point where he can hit the United States. We're the nuclear power.

CAVUTO: But it seems like terrorists who love to call our bluff, right?

I mean, Iran is different -- a horse of a different color, but the same approach. We don't believe the U.S. will do anything, despite the Syrian strike with the Tomahawk missiles.

CAVUTO: We don't believe the U.S. wants to go engage there further either with North Korea or the Iranian saber-rattles.

LIEBERMAN: So, this is why President Trump's order the hit on the Syrians was so important and why we, hopefully together with allies, have to continue to do that against the worst actors in the world, because, otherwise, the bad guys dominate, because they don't really fear us.

LIEBERMAN: And it's the kind of world in which, without fear of the United States and our allies, we're all eventually going to suffer.

Incidentally, we worry about Iran. Iran and North Korea cooperate on military programs, including ballistic missile defense. So, what North Korea may be developing today will be in the possession of Iran tomorrow and vice versa.

CAVUTO: Real quickly, I would be remiss.

The Comey situation, do you think there should be a special commission on the FBI, an independent prosecutor? What do you think?

LIEBERMAN: You know, I always favor the special counsel law, because it's hard to have a credible investigation of somebody high up in the government.

So, I would still like to see a special prosecutor, a special counsel.