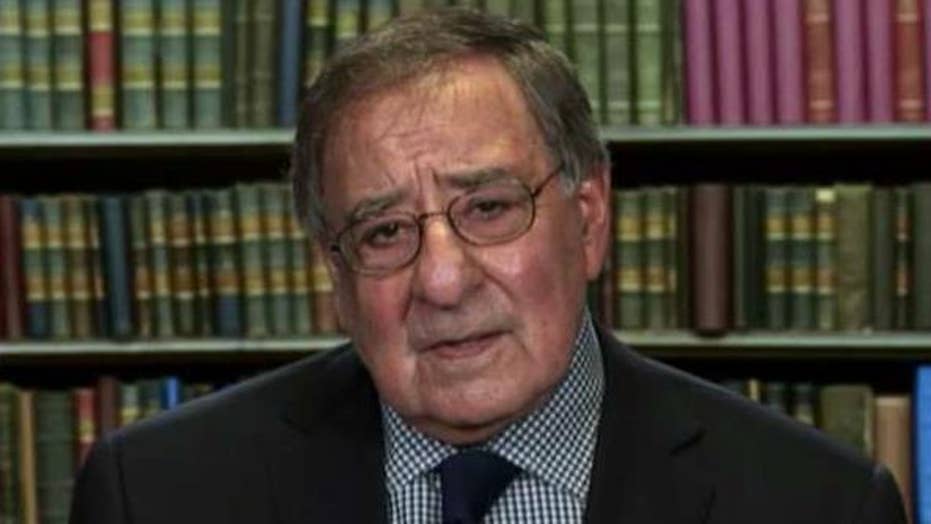 This is a rush transcript from "Your World," February 9, 2018. This copy may not be in its final form and may be updated.

DAVID STOCKMAN, FORMER REAGAN ADMINISTRATION BUDGET DIRECTOR: Yesterday will go down as the night of fiscal infamy, because they have...

STOCKMAN: They have -- this two-year budget deal. They have opened the flood gates to a fiscal calamity that can't be stopped.

CAVUTO: All right, Ronald Reagan's budget director, who is not happy about what he's seeing right now, and said that what Republicans and Democrats agreed on to keep the government lights on for another couple of years, they're going to rue the day. So will the markets. So will you.

Let's get the read on all from Leon Panetta, a former budget director himself.

But so many things that you have been, defense secretary, CIA director, chief of staff, congressman. I could go on and on.

But I want to hearken back, if you don't mind, Leon -- and very good to have you -- to what David Stockman was saying about this being a sham, this two-year deal being a sham. It's going to wreck our economy. We're going to be looking at record debt. And both parties are guilty.

LEON PANETTA, FORMER U.S. SECRETARY OF DEFENSE: Well, David is a former OMB director, and so am I. And so you do look at how much we have added to the national credit card here.

What concerns me is, you have got a combination -- obviously, the tax cut added about $1.5 trillion to our debt. The estimate here is that this could add as much as $1.5 trillion if the spending caps continue at the level that was agreed to into the future. So that's about $3 trillion that will be added to the debt.

CAVUTO: By the way, no one mentions the other spending that was also a part of this whole package that goes up a separate $10 trillion. Everyone talks about the tax cuts and how much they cost.

PANETTA: Yes. No, no, there's an awful lot of additional spending that was added here.

PANETTA: And it's the easy way to do it. You know, having been in the Congress, the easiest thing to do in the world is to add spending and not have to pay for it.

But at some point, the fact is that Republicans and Democrats are going to have to come together on some kind of comprehensive budget agreement that tries to reduce this deficit over the next five to 10 years.

If that doesn't happen, then it's going to have serious consequences in terms of our economy.

CAVUTO: Secretary, one of the things that has come up in discussing the budget outlook is the fact that we can't and don't appreciate what even a slight uptick in rates can do about the debt, and that if you just buy the consensus, always dangerous, that rates could go up another two or three percentage points just to get back to normal, man, oh, man, that -- that would be welcome in response to good economic news, not welcome if it means the debt we carry becomes a lot more expensive.

PANETTA: No, I think that's the concern.

And, you know, with a very volatile market, some of that volatility caused about the concerns about where interest rates are going to go, bottom line is, when you increase the debt, and we have to sell that debt, we're going to have to charge higher interest in order to be able to sell that debt. That is -- that is fact.

If that happens -- and there's a good chance it could happen if there's no fiscal discipline here by the Congress or the administration...

CAVUTO: Well, there doesn't appear to be any on either parties' part, right?

PANETTA: Then you are going to see interest rates go up.

CAVUTO: Let me ask you about a billion about the unexpected benefit.

I was just saying that both parties are now showing a lot of discipline. Let me ask you a little bit the unexpected benefits, consequences of a strong market.

CAVUTO: Bill Clinton experienced that with the boom in the markets and Internet and everything, and the revenue came pouring in.

This president likes to say, when you get the pay-it-forward with these tax cuts that companies are sharing with their workers, and individuals will start sharing by spending more and creating more revenue to the government and all of this, that that too would have an advantageous effect on all of this.

PANETTA: Oh, I don't think there's any questions that if you have a strong economy that obviously growth can help.

But the problem is, the higher the deficit goes, the higher that debt goes, the harder it is, based on experience, to just solve all those problems with growth. That's not going to happen. At some point, you have got to provide fiscal discipline.

The reason in the '80s and '90s that the economy did well was, yes, the economy was doing well, yes, we had good growth, but at the same time, we put fiscal discipline in place as the result of budget agreements both in Republican administrations and Democratic administrations.

That combination is what produced a balanced budget. Somehow, we have got to get back to that discipline.

CAVUTO: Let me switch to the Olympics. They're starting right now, as you know.

And there was that kind of tense moment when Vice President Pence was just feet away from the sister of the North Korean leader. And almost everyone is worried about how these Olympics will go forward now given the ongoing tensions we have with North Korea, because we just agreed to still more sanctions with the South Koreans today.

PANETTA: North Korea has always been a cause for concern.

You have got a country that is developing ICBM missiles that could very well carry a nuclear weapon, and threaten the United States and threaten the region. That is cause for concern, along with an erratic leader that no one knows exactly what he may or may not do.

So, yes, there's cause for concern. On the other hand, I'm glad that there at least is some break in the tension by virtue of these Olympics, that the South and -- South Korea and North Korea have been able to at least come together with regards to the Olympics.

But whether or not that can lead to negotiations on these more important issues related to the nuclear development of North Korea, I think that still remains a big question mark.

CAVUTO: You know, when you were Bill Clinton, serving in a variety of capacities, the idea was that he governed from the middle, even though he might have been tempted from the left.

Now it's very hard to do that. On the Democratic side, they seem to come out from the left, an impossible challenge to get even close to the middle.

And I'm wondering if you're worried for your party, that that seems the direction that some, not all, but some of the prominent candidates who might be presidential possibilities, that they will run from the hard left.

The American people, you know, have certain values and beliefs, and I think whoever runs for president ought to reflect those values and beliefs. And, usually, that means moving somewhere either center-right or center-left. But if you go to the extremes, if you run on the extremes, that's a sure bet that you're going to get beaten.

CAVUTO: You think the problem is not enough Italian-American candidates are considering the White House? Is that an issue?

PANETTA: Neil, you have really -- you have hit the nail on the head.

PANETTA: Just I think at -- I think at some point the Italians have got to break out and provide some leadership.

CAVUTO: They have got to do something.

All right, Leon Panetta, former defense secretary, CIA director, OMB director, Clinton chief of staff, an instrumental player in a big boom. Whether on the right or left, you have got to be suspicious of him, because both sides admired him, which, again, should be a cause for concern.