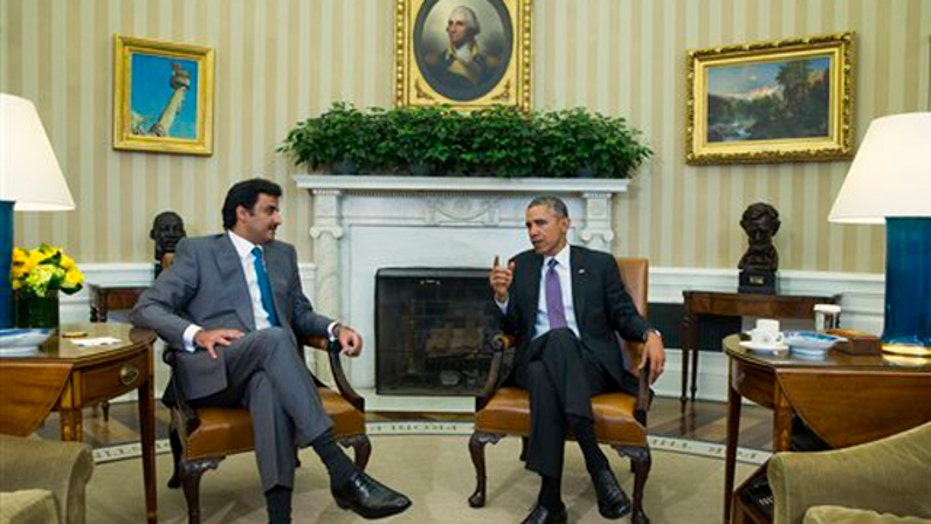 Should we cut off all sales to all countries with ties to terrorists?

MIKE OZANIAN: Because President Obama has been down playing the threat that ISIS poses to America, going all the way back to the attack on the American consulate in Benghazi. That's why he's warming Qatar. Even though Qatar is definitely helping the terrorists in the Middle East. John Bolton has been warning about this for months now and Egypt has been warning, but the administration has totally ignored these warnings.

BILL BALDWIN: I think you have to shed some of your idealism when you engage in foreign affairs. If you're too picky about your alliances you wind up fighting alone. Imagine if in WWII, if we said we are going to refused to help the soviets fight the Germans because were unhappy with Stalin's human rights record.

ELIZABETH MACDONALD: I understand you want to curry favor and have some interest in the region to basically attack your enemies there, but what about moving the military base to the airport there? Move it to Kuwait, Jordan or Bahrain.

JOHN TAMNY: The question of arm sales is kind of a distraction here if we're not selling to them other arms dealers or other countries will. I guess my question is why -- you're right, why the close relationship with Qatar, the federal government is required to depend for our national defense. I keep wanting the question answered how our national defense is enhanced by these involvements overseas particularly in the Middle East.

CARRIE SHEFFIELD: This is a failure by the White House. The Pentagon wants to keep the air force base there, it's the white house that is failing to step up and be with our allies in the same way they've been with Israel and Saudi Arabia. So I see it as a failure by president Obama not by Qatar.

BRUCE JAPSEN: I think we're going to regulate the Internet like a public good and we're doing that by not having told on the information super highway I think that this will in the long-term be good for consumers.

STEVE FORBES: Why obey the law when it's inconvenient? That's been the mantra of this white house from day one. In terms of what's happened now in regulating the Internet this is a solution in search of a problem. Data hogs love it because they don't want to pay their fair share. That's also an incentive for people to figure out how to make it more efficient so we're going to end up paying more and getting less and government control especially when you have to in effect get government permission to set up a website or things like that, whoa, this thing is just the beginning.

BILL BALDWIN: This is not going to destroy the Internet as we know it, it is going to cost you another $2 a month and the reason for that is that time warner and Comcast are going to have to spend a lot of money on lobbyists and lawyers and given all the secrecy it looks like they're going to also have to hire some espionage firms to figure out what the regulation says.

ELIZABETH MACDONALD: Our cable and phone bills are going to go way up. More rules and regulations doesn't mean efficiency and achievement.

MIKE OZANIAN: It is like ObamaCare except for the Internet. This law sucks.

STEVE FORBES: Politicians are short sided they're unwilling to make a sacrifice today even if it means a better economy tomorrow and the second reason is power. When you have high income tax rates and complexity it's more power to the politicians.

BILL BALDWIN: In some of these states where they've had no income tax like Alaska where oil revenues are down and in Texas where you have one in four Texans that are uninsured, they have problems when the economy gets hurt from oil and things like that. So an income tax might bring more predictability to budgeting.

ELIZABETH MACDONALD: Look at what happened to LA. LA had high taxes and regulations, lost two dozen companies to low tax areas like Texas, that he is why their unemployment rate trimmed the national average.

RICH KARLGAARD: Silicon valley and Hollywood are two rich to care where the income tax really hits is the middle class and small business owners and that's why you see them fleeing to Washington, Nevada and Texas.

JOHN TAMNY: Taxes are just the penalty that politicians fois on work so it's no surprise a low tax state would attract lots of people. Are they everything obviously New York and California are rich despite the high taxes but taxes really do matter.