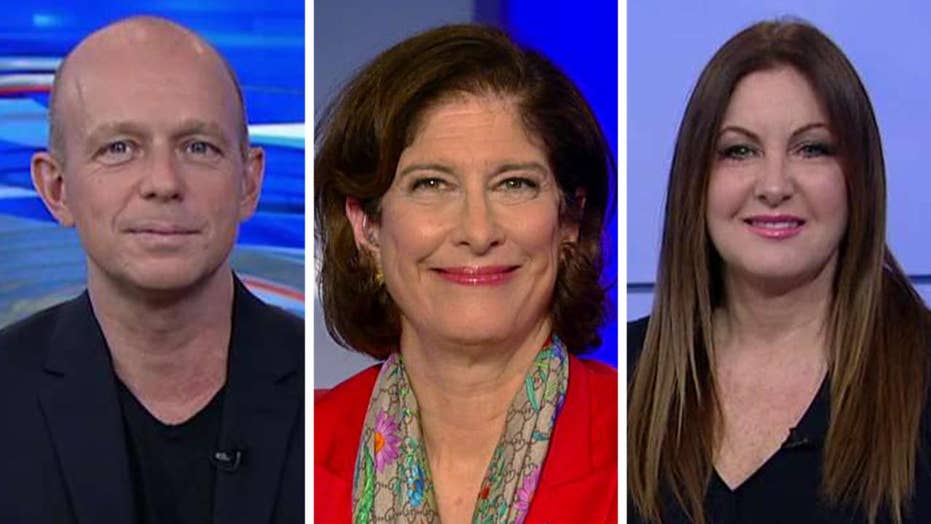 FBI, DOJ to brief lawmakers on handling of Russia probe; reaction and analysis from the 'Special Report' All-Stars.

This is a rush transcript from "Special Report with Bret Baier," May 23, 2018. This copy may not be in its final form and may be updated.

PRESIDENT DONALD TRUMP: We now call it spy-gate. You are calling it spy-gate. A lot of bad things have happened. I want them all to get together. They will sit in the room. Hopefully they will be able to work it out among themselves.

We are not undercutting. We're cleaning everything up. What I want is I want total transparency.

SENATE MINORITY LEADER CHUCK SCHUMER, D-N.Y.: Any meeting between the Justice Department on Capitol Hill about such information should only be attended by members of the gang of eight.

REP. TREY GOWDY, R-S.C.: I don't care who comes. I am not in control of the invite list.

BRET BAIER, ANCHOR: Well, this meeting is going forward. We mentioned it earlier with John Roberts. The meeting tomorrow will include the House Intelligence Committee Chairman Devin Nunes, the House Oversight Committee Chairman Trey Gowdy, the FBI director, the national intelligence director, and the acting principal deputy attorney general. All of those will be at the meeting at the DOJ about the classified elements of this investigation.

But we are being told that there will likely be another meeting with the gang of eight, the bipartisan leadership of Congress, possibly after the Memorial Day recess.

We'll start there with all of this investigation of the investigation and bring in the panel. Joining me here in Los Angeles: Steve Hilton, former adviser to British Prime Minister David Cameron at host of "The Next Revolution" here on Fox News; and Leslie Marshall, syndicated talk radio host, and in Washington, Mara Liasson, national political correspondent for National Public Radio, and Matthew Continetti, editor in chief of the Washington Free Beacon. Steve, let me start with you, your thoughts on how this is all coming out and the significance of it.

STEVE HILTON, FOX NEWS: Well, Bret. It wasn't that long ago that the left and parts of the establishment media, I'm thinking in particular The New York Times, were deeply suspicious of what we now describe as a deep state when we had James Clapper going to Congress and lying about surveilling the American people. There is this suspicion of the security services and the intelligence agencies.

And now that they seem to be against Trump, we are supposed to believe they are purer than pure, everything they say is gospel, and there's no grounds for any suspicion. I think there's no question that there are sufficient reasons to think that the establishment in the government bureaucracy thought that the prospect of a Trump presidency was unthinkable, unacceptable, and took steps to try and stop it. There's enough suspicion there to think that we really do need a thorough investigation that's equivalent to the investigation in Russian meddling, which is really important, to look at the potential of deep state meddling.

MARA LIASSON, NATIONAL PUBLIC RADIO: I'm not, but the president is very happy, it sounds, that he has branded something new. He is a super brander, and he has come up with spy-gate, and as he said today, you are calling it spy-gate, I'm calling it spy-gate. Everyone is talking about this. He said it could be the biggest scandal in American history.

What he is talking about according to his tweets is that there was someone, a spy, as he calls it, embedded in his campaign for political purposes to spy on the campaign. So far there is no evidence of that. We don't know if he's talking about an FBI informant who met with certain members of the campaign, reached out to them to find out what contacts they had with Russians.

But if the president wanted to, he can declassify any piece of information he wants. He could have asked any of his intelligence officials over the last couple weeks or months to say, hey, tell me what you know. Was there a spy embedded in my campaign? I don't think he wants to know. I think he wants to keep this story going. This is a good narrative for him, and it helps him undermine the credibility of the investigations into him and his campaign.

BAIER: I want to talk about another development, Leslie, and that is the Jared Kushner getting security clearance today finally after a long period of time. National security law attorney, former FBI agent, told us, quote, "This is a very significant development. The bureau would have had very senior people on this and the matter would have been reviewed and approved of the most senior levels. Given all the circumstances, this decision would be highly vetted and considered. They wouldn't be deeming him eligible for access to classified materials no matter what level of clearance if there were any outstanding counterintelligence concerns whatsoever. Again a very significant develop," one person's assessment of this. Your thoughts?

LESLIE MARSHALL, RADIO TALK SHOW HOST: I don't think that Jared Kushner is the problem. I think the president and his rhetoric are the problem, and I think that's caused a problem not only for his son-in-law but the tension that we have seen with the rhetoric toward the FBI and other law enforcement agencies that are supposed to be working for our country and for the constitution and have their loyalty there.

When we go back to Mara's point, when you call the spy-gate, and I'm not calling it spy-gate. I just want to go on the record there.

BAIER: I don't think we have called it spy-gate, I'm pretty sure.

MARSHALL: Let's speak about spy-gate, if we will. The rule of the FBI, and anybody, even if they worked for Republican president if it is this gentleman all the way back to Ronald Reagan, is to do exactly this, is to say, hey, wait a minute, there've been some conversations between Russia and those in the United States. Paul Manafort has been indicted. Paul Manafort is one of the people who was spoken to. And to Mara's point, the president certainly has the power to find out if there was a spy embedded, if there truly was spy-gate. This is deflection. Why deflect from the Mueller special counsel investigation if there is nothing to hide, if there's no there there?

BAIER: Both things are going forward. And we always say we don't know what we don't know, but we are covering both sides. The reason I bring up the Jared Kushner thing is how that was covered early on in this process suggested that because of all the foreign contacts and all the questions that were raised about Jared Kushner that there was no way he was going to get security clearance and somehow he could be charged or indicted. That was the coverage and the speculation. Now he's cleared.

MATTHEW CONTINETTI, WASHINGTON FREE BEACON: Right. And as one former official told Catherine Herridge in her report, Bret, that would imply that those counterintelligence concerns no longer exist if he has been granted this security clearance. I like to quote Donald Rumsfeld. There are so many known unknowns about now the investigation into Russian interference and also the investigation of the investigation, which is really, let's remember, coming from Congress. As much as Donald Trump is publicizing it and in fact aiding it, there are a lot of concerns from the House Intelligence Committee about how did this start. And I think that's one of the great known unknowns, is when did this investigation open, what was in the original order that Deputy Attorney General Rosenstein gave to Robert Mueller? We still don't know the full details of that. We also don't know about this other or semi-British professor Mifsud who met with George Papadopoulos. He hasn't been seen in public in months. So the known unknowns continue to mount.

LIASSON: I really don't know. We know what Rudy Giuliani says about it, that it will be done by September, Mueller will be done by September. The problem with covering this is that every little twist and turn, we don't know the big picture. Bob Mueller isn't talking, to his credit. So we are covering this through a straw, and everything seems like the biggest deal. I just would say the bottom line to me for today for Jared Kushner, this was a good day for Jared Kushner and it was a good week for Jared Kushner because he started working on a substantive policy that has bipartisan support in Congress, and that is prison reform.

BAIER: That's exactly right. We will be following that as it makes its way past the House and now headed to the Senate.