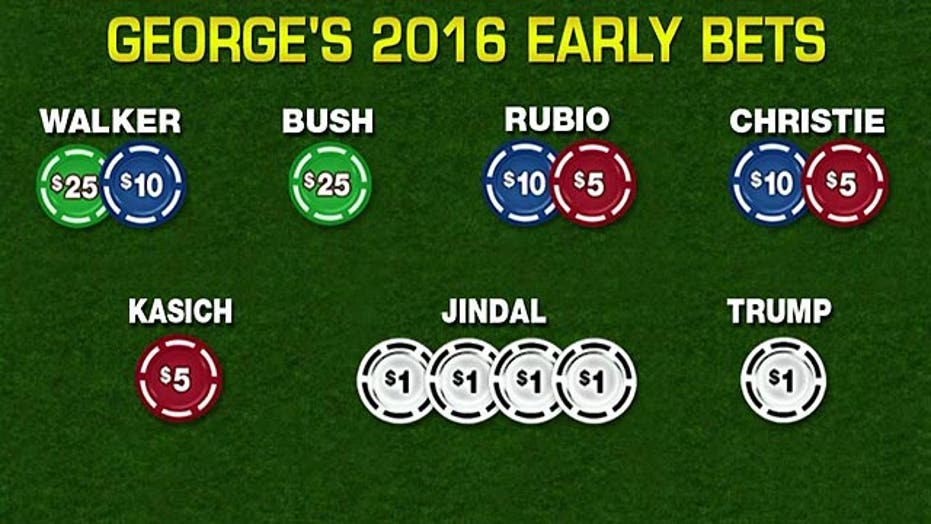 Latest bets in the Candidate Casino

This is a rush transcript from "Special Report," April 17, 2015. This copy may not be in its final form and may be updated.

FORMER GOV. JEB BUSH, R - FL: My record is a conservative one.  It's a I'm not kidding conservative one, and it's a record of accomplishment. It's I did it. I didn't talk about it.

FORMER GOV. RICK PERRY, R - TX: Change is only going to come from the outside from my perspective, and so should the next president.

GOV. CHRIS CHRISTIE, R - NJ: We can no longer afford to have weakness in the Oval Office. We need to have strength and clarity and hard truths.

BRET BAIER, ANCHOR: Three of the potential candidates up in New Hampshire for this cattle call that's going on this weekend. You know this has been a busy week in politics. We started the week with Hillary Clinton on her road trip and making that historic stop at Chipotle where every reporter talked about it with the extra guac. Then we ended the week with Marco Rubio who is now a candidate in this presidential nomination race on the Republican side. These pictures obtained by Independent Journal Review also at a Chipotle, also apparently ordering guac, this free advertisement for Chipotle.

And this brings us to the Republican Candidate Casino. There's not a Chipotle inside this, but we do this every Friday where people are putting their $100 in chips. Let's start with the Republicans and George.

GEORGE WILL, SYNDICATED COLUMNIST: I give $35 to Scott Walker and $25 to Bush because they've shown the most breadth of appeal in our factional Republican Party, $15 to Rubio because he rolled himself out well and has shown tremendous political talents, Chris Christie because he earned our gratitude this week by raising an issue no one wants to talk about, which is the unsustainability of the entitlement state, $5 dollars on Kasich, governor of Ohio, because I think the fact that Mr. Bush is not stormed to an insurmountable lead that will tempt Kasich to try again, $4 on Governor Jindal of Louisiana because he's simply too intelligent to be left out of this, and $1 on Donald Trump in the hope that he will be tempted to run, be predictably shellacked, and we will be spared ever more this quadrennial charade of his.

KIRSTEN POWERS, COLUMNIST, USA TODAY: Well, so, I generally think there's going to be a Midwestern governor and someone out of Florida and then some sort of evangelical-type candidate, but I'm kind of skipping over the evangelical candidate because I don't think that person actually will become the nominee. So if we're just looking at who I think will become the nominee, I think Walker is the most likely in terms of being the Midwestern governor, and I think that Jeb Bush is probably the most likely to make it out of Florida. But I think Rubio has been inpressive. And so I would give him $10. I think he's more likely a VP candidate if it's Walker, but I think he's had a good rollout.

CHARLES KRAUTHAMMER, SYNDICATED COLUMNIST: Well, I remain with Rubio at the top of my list because he showed a real political astuteness. When he's in Chipotle he was not wearing shades. Which I think really shows a common touch. That's how you're supposed to do it. It was Karl Rove who said that when Hillary and I think it was Huma who was with her, they were both wearing shades in Chipotle. They looked like fugitives on the lam wanted in four states for a failed foreign policy, which I thought was a rather good line that I had to steal.

I remain sort of bullish on Bush, obviously, and Walker. I do admire Christie for raising Social Security, but it's like Mondale declaring that Reagan says he won't say he'll raise your taxes and I will. It's a fatal piece of honesty.  I understand it's his appeal and perhaps as a long shot it would work and it's a way to distinguish himself. But I can imagine half the Republican field attacking him on that because it's not a popular move.

I have $5 still on Cruz and I am now -- I have fallen off the wagon. I'm no longer contributing to my retirement fund. I think the wine, women, and song is much more attractive and it has a more lasting effect.

BAIER: Yeah, I wanted to play this sound bite before we left the Republican casino, and this is Jeb Bush being questioned by an audience member in New Hampshire today.

UNIDENTIFIED FEMALE: I don't want a coronation on our side by any stretch of the imagination.

BUSH: I don't see any coronation coming my way, trust me.

UNIDENTIFIED FEMALE: Good. I'm glad you feel like that.

UNIDENTIFIED FEMALE: I hope you feel like an underdog.

BRET BAIER, ANCHOR: What do you see that I don't see? With that, let's head into the Democratic casino, which is, as you see, much fewer -- many fewer possible candidates, and obviously, one big one that got a lot of attention this week. George?

WILL: Well, I'm putting $51 on Hillary Clinton and $49 on someone so obscure he doesn't even know he's running but I think he should. That's Sherrod Brown, the senator from Ohio. He looks like someone who has just spent the night at the barricades. He's impeccably wrong on all issues of public policy except for one, and that is he does want to break up banks that are too big to fail. He's right about that. He's from a swing state and has enormous political skills, as he's shown in that state, and which she has shown none of.

BAIER: Kristen, we're going to talk about trade in the Lightning Round, but a couple of possible candidates, Martin O'Malley and Bernie Sanders, pretty much stepping out and saying Hillary Clinton needs to step with them on this trade issue.

POWERS: Yes, well, she's going to be getting pressure from the left.  Those are the two most likely people who would throw their hat in the ring.  But if we're going to look at just who possibly could win, I put $100 on Hillary because she's the only real candidate. Even if both of them get in, Martin O'Malley is not our next president, nor is Bernie Sanders. So I think that barring someone else getting into the race, it's obviously going to be Hillary, whether you think she should be or not. But I think that she's going to have a lot of answering to do to people on the left.

BAIER: OK, black plays, black chips on the table, $100 for Hillary. What have you got?

KRAUTHAMMER: I've long had $100 on Hillary, but I'm down to $85 because the only question in this race is will Elizabeth Warren ever get in, be provoked? She has no intention to.

KRAUTHAMMER: No, no, it's not good enough because there's a 15 percent chance, in fact, a precisely 15 percent chance that she would enter the race as one issue after another unfolds. Hillary has been hiding from every issue around. She won't speak to anybody and she orders her stuff at Chipotles, which is not really a source of controversy.

But, for example, she's going to have to declare herself on the trade agreement we're going to talk about in the next segment which the Democratic left hates with a passion, and it's a really important issue.  And the question is, will there ever be enough issues that will pile up enough to provoke Elizabeth Warren into running? And that's where I have my 15 percent. That's where I am with her right now. Absent her going into the race, it's 100 percent Hillary.

BAIER: OK. On the Republican side, not a surprise, but a lot of people at home put more money on Rand Paul, Ted Cruz and others. Thanks for playing.