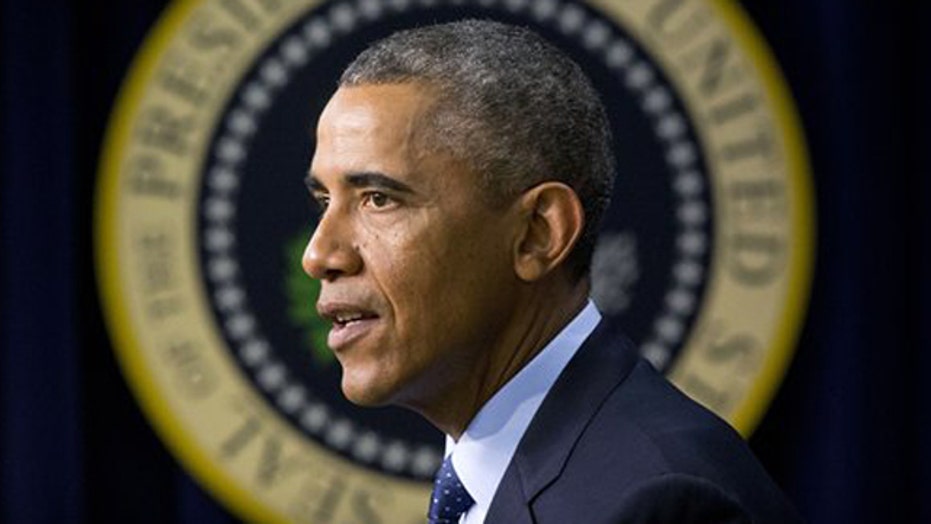 Krauthammer on how Obama is downplaying radical Islam

This is a rush transcript from "Hannity," September 26, 2014. This copy may not be in its final form and may be updated.

SEAN HANNITY, HOST: All right, that was the president at the U.N. on Wednesday quoting and praising a so-called moderate Muslim scholar named Sheik Abdullah bin Bayyah. But while he touts the sheik's alleged progressive worldview he seems to be forgetting that in 2004 the so-called moderate served as vice president to a radical Muslim group that issued a fatwa against American troops, encouraging all Muslims to violently repel and kill American soldiers serving in Iraq. So why did our commander in chief choose to honor this man in front of the U.N.?

Joining us to react is the one and only Charles Krauthammer. His latest book, "Things that Matter, Three Decades of Passions, Pass Times, and Politics" number one on the "New York Times" bestseller list. It has sold more than 1 million copies, making it arguably the best-selling collection of nonfiction in U.S. -- well, and for the year. Charles, thanks for being with us. Congrats on the book.

By the way, the first point, Charles, in May the president promoted him back in May, and then they apologized earlier. How could he make the same mistake twice?

CHARLES KRAUTHAMMER, SYNDICATED COLUMNIST: Yes, well, he seems to have an unrevised view of a man that, you're right, the State Department abjectly apologized for having praised him. But look, this is consistent in this administration to downplay the Islamist character of the barbarism that we see around the world.

You go back to 2011, James Clapper, our chief -- the director of national intelligence, said that the Muslim Brotherhood in Egypt was a largely secular organization. This of course is preposterous. And look how we coddled and coddled the Islamist regime when it was in power in Cairo.

And in this very speech, as he always does, the president refused to associate the violence around the world, the barbarism that we see in these countries, with Islamist beliefs. He calls it violent extremism. He used the phrase three times at the U.N., as if the violence that we see around the world in Nigeria, in Mali, in Libya, in Kenya, in Somalia, in Yemen, in of course Syria, Iraq, in Pakistan and Afghanistan, as if all of these by an amazing coincidence are perpetrated in the name of Islam. Of course the majority of Muslims are peaceful. But to deny the roots of this ideology in a great religion is to deny reality and to intellectually and morally disarm those who want to fight it. If you can't name the enemy, you don't want to identify the enemy, you can't correctly fight the enemy.

For god sakes, even the United Arab Emirates called ISIS Islamic extremism, and ISIS is itself calls itself the Islamic State. They proudly proclaim this. And Obama denies it.

HANNITY: How do you explain this? It's inexplicable. Why the mysterious reluctance, resistance? I agree. I don't think you can defeat an enemy unless you identify it, Charles. Why? Where's the fear coming from?

KRAUTHAMMER: What do you think I am, a psychiatrist?

HANNITY: Yes, I do actually.

This is a rush transcript from "Hannity," September 26, 2014. This copy may not be in its final form and may be updated.

KRAUTHAMMER: It's really hard to go into his head. I would assume the reason he does it is because he's afraid that if he acknowledges the obvious reality people will associate Islam with this barbarism and make them equivalent, whereas nobody is asking him to do that. That would clearly be unfair and false. But people are asking him to recognize the elementary fact that this enemy who are attacking us everywhere on the planet from all these countries I talked about, and then of course in the United States, and there have been attacks of course in Europe and elsewhere, is rooted in a religion, an interpretation of a religion. And that is not an insignificant relationship.

HANNITY: Let me ask you this. So we have ISIS beheadings in the news. Then you have ISIS this week calling for lone wolves to go out and kill in America and other countries. Then you have this incident in Oklahoma. It would seem on the surface to be connected in my view. It's too early to tell. An investigation has to come through, but I can hear people already saying, well, you don't know that, the resistance even there to put those dots together when it's very likely to be that way, especially looking at this guy's Facebook page. What's your reaction?

KRAUTHAMMER: But even if they are not connected by communication or direct orders, they obviously are drawing their inspiration from an ideology which is spread largely on the Internet, but a lot of it in madrasas and in mosques around the world in prayers and transmitted, you know, for instance the guys who did the bombing in Boston. They were imbued with this in the United States form radical -- it's not that they breath it in the air. They get it from sources. They share the ideology. And I think it's very important that we name it and we talk about it with obvious, clear, and non-apologetic terms.

HANNITY: All right, Charles Krauthammer, good to see you. Charles, thank you for being with us as always. Appreciate it.