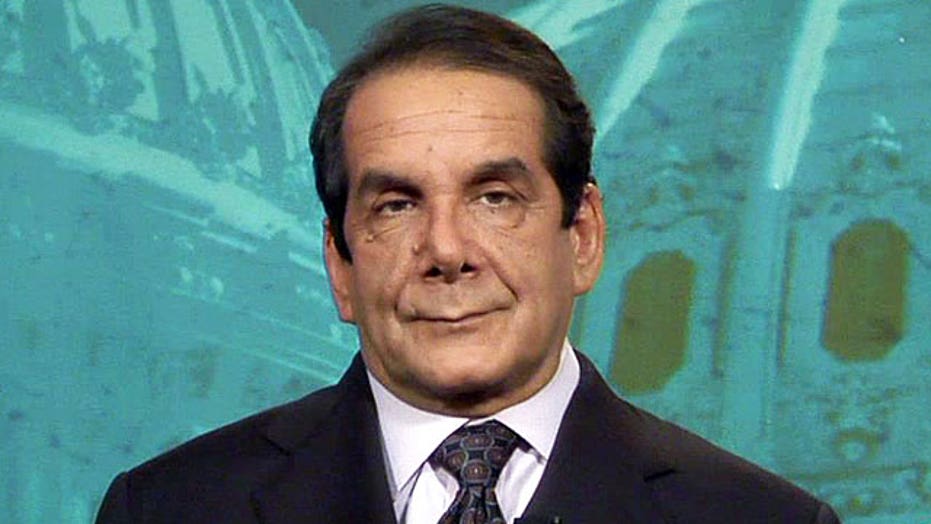 This is a rush transcript from "Hannity," February 5, 2015. This copy may not be in its final form and may be updated.

SEAN HANNITY, HOST: Welcome back to "Hannity." Now more on the big two top stories of the day. Catching headlines, Brian Williams caught red handed and the president lecturing Christians at the National Prayer Breakfast.  Here with reaction, author of the number one New York Times bestseller "Things that Matter," Fox News contributor, the one and only Charles Krauthammer. Charles, good to see you, my friend.

CHARLES KRAUTHAMMER, SYNDICATED COLUMNIST: Pleasure to be with you again.

HANNITY: What was your reaction to the prayer breakfast?

KRAUTHAMMER: I was stunned that the president could say something so at once banal and offensive. Here we are now two days away from an act shocking barbarism, the burning alive of a prisoner of war, and Obama's message is that we should remember the crusades and the inquisition.

I mean, for him to say that all of us have sinned, all religions have been transgressed, is, you know, is adolescent stuff. Everyone knows that.

What's important is what's happening now. Christianity no longer goes on crusades and it gave up the inquisition a while ago. The Book of Joshua is knee deep in blood. That story is over too. The story of today, of our generation, is the fact that the overwhelming volume of the violence and the barbarism that we are seeing in the world from Nigeria to Paris all the way to Pakistan and even to the Philippines, the island of Mindanao in the Philippines --

KRAUTHAMMER: -- is coming from one source. And that's from inside Islam. It is not the prevalent idea of Islam, but it is coming from Islam, as many Islamic leaders including the president of Egypt and many others have admitted. And there needs to be a change in Islam.

It is not a coincidence that all of these attacks on other religions are happening, all over the world, in a dozen countries, two dozen countries, all in the name of one religion. It's not a coincidence. And for the president to be lecturing us and to say we shouldn't get on our high horse and to not remember our own path is ridiculous. The present issue is Muslim radicalism and how to attack it.

KRAUTHAMMER: A lot of people are dying.

HANNITY: I think it's not only ridiculous but it's dangerous that he can't identify this enemy. A quick example, the Jordanian reaction to the killing of the mass murder -- the murder of this Jordanian pilot burned to death and then bulldozed, you know, compare the president's reaction to James Foley and his beheading, a quick, you know, three-minute comment.  Three minutes later he's on the golf course for five hours, and no strong statement or reaction from the president.

KRAUTHAMMER: From Obama's first speech at West Point in December 2009, ironically announcing the surge in Afghanistan, you could tell that his heart has never been in this fight, never. He's the commander in chief and yet he announces one sentence after he talks about the surge, he talks about the day to withdraw. Everyone in the region knows that. Everyone in the Middle East knows that he took on the fight on ISIS only because of the public reaction to the video of the beheading of the two Americans. He never would have lifted a finger otherwise. He hasn't helped the rebels in Syria. He has not given the weapons that Jordan needs. The Kurds, who are actually able, courageous, and well -- and committed to the fight against is, still cannot get direct arms from the United States.

KRAUTHAMMER: The world knows this. Our enemies know it and our friends know it.

HANNITY: And so not only West Point but the first summer being president when he goes to a foreign country apologizing at foreign capitals for America for sins real and even imagined.

Let me transition and ask you, we work in the media business. You've been following the story of Brian Williams of NBC News.

KRAUTHAMMER: Look, this is a big mistake on his part. I don't like to pile on. I mean, all of us have embellished. Once you start to embellish you're trapped in it and you can't escape. Let's remember Hillary made the story about being shot at in Bosnia.

KRAUTHAMMER: And she is the odds on favorite to be the Democratic nominee of the presidency. So course you expect a politician to lie and not a broadcaster. So I can understand the difference. But what stuns me is how dumb this is. If you're going to make up a story, do it when there aren't other people around. You know, you tell a story --

HANNITY: If you're going to tell a lie, don't have witnesses, is that what you're saying?

KRAUTHAMMER: Exactly. You tell a story about wrestling a lion to the ground because generally speaking lions don't have access to the Internet. But you don't do it about an event that everybody saw.

KRAUTHAMMER: You know in the end you're going to be unmasked about it.

HANNITY: All right, last question. The phenomenon of "American Sniper," I've interviewed Chris Kyle's wife, brother, his father. They're amazing people. He was an amazing man, more confirmed kills than anybody else in military history. But yet people still pile on. The latest person is Jesse Ventura on our mutual friend Alan Colmes' radio show. Here's what he said.

HANNITY: What is it about people that just have total contempt and lack of understanding for what it is that we are given as a gift from those brave men and women that the American people obviously responded to at the box office?

KRAUTHAMMER: I think it's fairly simple. I think the whole fight over the meaning and popularity of the movie is a surrogate for rearguing the war in Iraq. What worries the left is that they thought they won the argument. And here's a movie amazingly popular that actually acknowledges the courage and heroism and sacrifice of those who fought in Iraq. And I think that is sort of unpalatable.

Remember, Hollywood put out half a dozen anti-war, anti-Iraq, we are the bad guy movies, and nobody went to see any of them. And here is one movie which celebrates a courageous soldier, and it is extremely popular and actually rather artistically done, well-done by Clint Eastwood. And the left has to now re-litigate the war because they thought they had won the argument and they want to make sure that they retain that at least ideological victory.

HANNITY: All right, Charles Krauthammer, always good to see you.  Thank you so much for being with us.