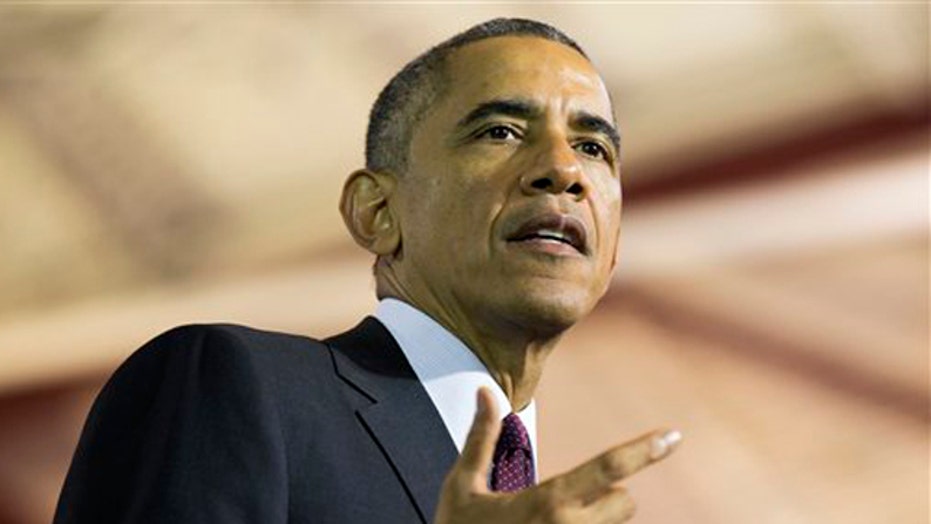 This is a rush transcript from "Hannity," October 31, 2014. This copy may not be in its final form and may be updated.

SEAN HANNITY, HOST: My next guest says, much to the dismay of Democrats, the fast-approaching midterm elections are actually a referendum on the president and his record. Now, he also believes the stage is set for a major GOP victory on Tuesday, but he adds that if the party cannot take back the Senate in four short days, it may be time for leaders to look for another line of work.

And in a very desperate attempt to win votes on Tuesday, Democrats are resorting to their old tricks, the race card. Listen to this.

HANNITY: Joining us now to explain is the author of the New York times number one best-seller, over a million copies sold, "Things That Matter," our good friend, Dr. Charles Krauthammer, is with us. Charles, good to see you, sir.

HANNITY: All right, every election year, we see the Democratic Party -- they will divide the country, rich versus poor, old versus young, black versus white. They'll scare women and children. Happens every year. But now it's Georgia, North Carolina, Landrieu in Louisiana, Charlie Rangel.  There seems to be more desperation in this campaign than I've seen in recent campaigns. Your reaction.

KRAUTHAMMER: Well, the desperation and the ad hominems come into play when you don't have any arguments. The 2010 election, the shellacking the Democrats took was about ideology. It was about liberal overreach, the stimulus, ObamaCare, over-taxation, over-regulation, and we know what the result was. That set off this counter-reaction called the Tea Party.

And what we're seeing now, six years later, is an election that's not only about ideology, it is a rejection of hyper-liberalism. But now there's an overlay of sheer incompetence, because in the second year of this administration, 2010, all of this stuff was aspirational. It was in the future. Well, now we've seen six years of Obama-ism, and actually, the problem is not just the ideas and the ambitions, it's the fact that they are just incompetents.

Remember, in 1988, Michael Dukakis said," This election isn't about ideology, it's about competence." Well, that's because if you're a liberal, you don't want it to be about ideology. You won't even use the world.

But now we've seen six years of governance and now we see this string of incompetence, everything from ObamaCare to the VA scandal to the Secret Service Keystone Kops routine, where they leave the front door to the White House open.

And now it's kind of crystallized in Ebola with the over-promising, the running around, the contradictions, and now we get the appointment of the Ebola czar. Has anybody seen the guy? I mean, I've been saying that he's now in self-quarantine.

KRAUTHAMMER: Everything that they have had to manage, they can't.

HANNITY: He's the only one!

KRAUTHAMMER: And so I mean, it's not just...

HANNITY: OK, but the reason, I would argue, that they always try and scare old people and they play the race card because I think, historically, a strong case could be made, Charles, that these tactics, as despicable as they are, work. And so that's problematic. How should the Republicans, in your view, respond or not respond, in some cases?

KRAUTHAMMER: I think that when you're accused of being a racist, you don't even dignify the accusation with a response, because then you're conceding the premise -- I have to prove I'm not a racist.

I oppose the president because of his policies. I have since the beginning of his administration. If someone wants to imply it's on account of his race, I will not give them the dignity of a response. That's not America.

And I don't -- it might work on the fringes. I do believe when you scare old people on policy and you say they want to remove your Social Security, your Medicare, well, that's one kind of argument. I don't think it's actually true. But that's not quite an ad hominem. That's over the policy and it's stretching the truth.

But when you accuse someone of racism or sexism, when you do a Mary Landrieu that she did yesterday, I think you simply say that's beneath contempt. You cannot speak about the issues.

HANNITY: All right, Charles Krauthammer, as always, appreciate your insightful commentary. And we'll see what happens. What are you predicting in terms of -- what are you predicting in terms of Senate seats?  What do you think the outcome will be, if not by -- on November 5th, maybe by December or January? What do you -- what is the makeup of the Senate, in your view?

KRAUTHAMMER: I'm not going out on a limb by saying -- I'd say there's at least a 70 percent chance the Senate goes Republican. And I would say 51 or 52 votes. If we get -- look at New Hampshire. If some way Jeanne Shaheen loses that seat to Scott Brown, then we're getting a wave.