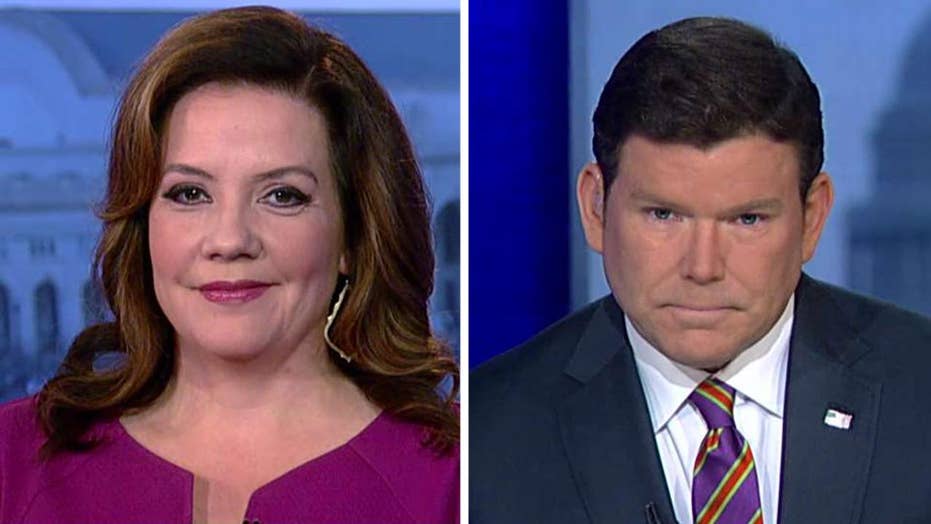 This is a rush transcript from "Special Report with Bret Baier," April 18, 2018. This copy may not be in its final form and may be updated.

BRET BAIER, ANCHOR: Things that stuck out in this news conference down there, a question about North Korea and the trip by the CIA director, secretary of state nominee, Mike Pompeo, saying that it was a good trip and that the conditions are set for his meeting, the president's meeting with Kim Jong-un, also saying that they are working on getting the three Americans that North Korea is holding to be released, and there is progress.

Also, that there will be a bilateral trade talks and negotiations in free, fair, and reciprocal trade deal with Japan.

And then, finally, asking about the Mueller probe and whether he is going to a fire Mueller or Rosenstein, the president saying they have been assaying these two gentlemen for three, four, five months that I was going to get rid of them. They are still here. I want this over, essentially. I've got negotiating to do.

Let's bring back our panel: Jonathan Swan, A.B. Stoddard, and Mollie Hemingway. Jonathan, what stood out to you?

JONATHAN SWAN, AXIOS: A couple of things. It's clear that Japan is going to try and reduce the deficit by buying lots and lots of American weapons. That seems to be their strategy to reduce the trade deficit, which is the major metric that Trump is concerned about on that area.

It is also clear that Japan is quite concerned about the U.S. giving too much for too little. You saw Abe after the president spoke saying we need to keep up the maximum pressure campaign on North Korea. We can't give up an inch. They need to actually do concrete things to denuclearize. So you do see some of that coming through. And it's clear they have a very close relationship. The two have a close personal rapport, and trade is one of the big issues that Trump is --

BAIER: Let's put up this tweet earlier. This is just a picture from them golfing earlier today, and I was referencing them in ten news conference as well. They do have a close relationship. Shinzo Abe was the first leader to reach out to President Trump after he won the election. Mollie, your thoughts on what you heard?

MOLLIE HEMINGWAY, THE FEDERALIST: Yes, it was interesting that he talked about the emotional issues in play and how much it meant to him that Donald Trump talked about the abducted people and the need to get them back, how much they agree on issues like the abducted Japanese. Also that they are of the shared mindset about maximum pressure against North Korea. North Korea has previously said that they were going to denuclearize. Previous administrations have gotten them to say that, but it doesn't actually happen. So that's why it is very important, and I think Abe was very good about talking about this, the need to verify any denuclearization plans and that they are unified in that approach.

BAIER: I want to play this soundbite. I talked to Shinzo Abe in Japan. Something very similar that he mentioned in this news conference he mentioned to me. Take a listen.

SHINZO ABE, JAPANESE PRIME MINISTER (through translator): North Korea has used of those talks just to gain time to further develop their nuclear program as well as missiles. So North Korean dialogue it just for the purpose of dialogue is meaningless. That is their experience.

BAIER: Yes, he emphasized that, A.B. I think that is still their concern, but that they are somewhat hopeful according to this news conference today.

A.B. STODDARD, REAL CLEAR POLITICS: Right. Prime Minister Abe is very, you mentioned he was the first to dart across the seas to meet with president-elect Donald Trump during the transition because he was so afraid of the kinds of things that President Trump said as a candidate about the expense of these alliances that we have and questioning their usefulness.

And he, because he is Japanese and because he is a good politician, wasn't going to say anything except for the exact Trump talking points about fair, reciprocal trade and everything else, and everything is hunky dory in this press conference. But it is true what Mollie mentioned. He wanted to get out there in public that he is anxious that the U.S. could get to the table and then get ripped off. And that's why in private it's clear President Trump made clear several times he is such a tough negotiator because in private he is telling him exactly what he told you, that you could get suckered. And that is why President Trump seemed to say for the first time I'm going to walk away if it's not going well.

But it was remarkable to see him thank the Chinese and also just after that campaign and this first year, for him to strike such a solicitous tone about the importance of alliances and to be so emphatic about his loyalty to Japan, it was really a change.

BAIER: It was interesting to watch, the atmospherics, also the translator switching for Japan a couple of times. We had a male and a female. Don't know why they went to the bullpen, but we will figure that out.

And also a lovely tribute to Barbara Bush at the beginning with a couple of chuckles where he praised their 73 years of marriage to H.W. Bush, saying I'll never beat that record.