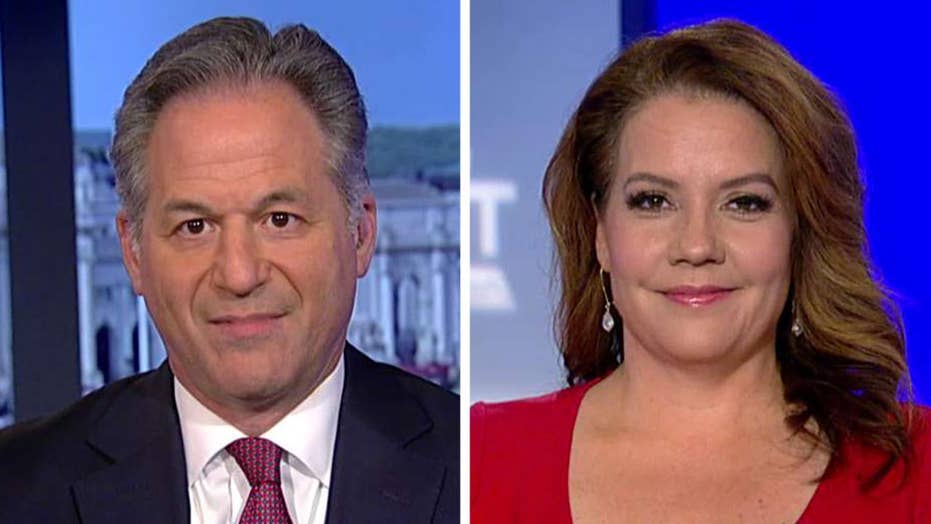 President Trump to announce his candidate to replace retiring Justice Kennedy on July 9; reaction and analysis from the 'Special Report' All-Star panel.

This is a rush transcript from "Special Report with Bret Baier," July 2, 2018. This copy may not be in its final form and may be updated.

PRESIDENT DONALD TRUMP: I interviewed and met with four potential justices of our great Supreme Court. They are outstanding people. They are really incredible people in so many different ways. Very interesting was my four meetings. I will be meeting with two or three more and will make a decision on the United States Supreme Court, the new justice. I think the person that is chosen will be outstanding.

JON SCOTT, ANCHOR: And to buttress his point, the president sent out this tweet to his 45 million Twitter followers. He writes "A big week, especially with our numerous victories in the Supreme Court. Heading back to the White House now. Focus will be on the selection of a new Supreme Court justice. Exciting times for our country. Economy may be stronger than it has ever been!"

We were just -- well, let's bring in our panel, Tom Rogan, commentary writer for The Washington Examiner; Mollie Hemingway, senior editor at The Federalist, and Charles Lane, opinion writer for The Washington Post. I was getting ahead of myself bringing you in before actually introducing you. Mollie, we were talking with Brit Hume about this upcoming court pick. It is certainly going to be a very heated battle.

MOLLIE HEMINGWAY, THE FEDERALIST: If past is prologue it will be very contentious. It's also true that it's a very tough time for Democrats to be fighting this pick. A lot of people are focusing on how Republicans might peel away, but if you have a bunch of senators in red states, in states that were carried by Donald Trump who are Democrats fighting for their political lives, and if they throw up a lot of obstruction here, that could be very tough for them and what are already some tough races that they are facing, Donnelly, Heitkamp, Manchin, McCaskill. So there are quite a few senators there that are in a very tough spot.

There's also the issue that if they do vote to obstruct this nominee and if the Republicans can't keep their coalition together, that only incentivizes Republicans to show up and vote in November to make sure that the next process will go much smoother for the Republican nominee.

SCOTT: And as if to make the point, the president invited many of those senators, or conferred with them at the White House about this choice.

CHARLES LANE, WASHINGTON POST: I think what you're seeing here is once upon a time, remember the gang of 14 on federal judges, which was a bipartisan coalition that was trying to steer that crazy and contentious process down the middle a little bit.

Now it has sort of trunk to the gang of five. You have Murkowski and Collins who are Republicans, and then the three Democrats, Heitkamp, Manchin, and Donnelly, who visited the president. You get the feeling those five are trying to help each other out because they all kind of have the same interest, which is not having to vote on a candidate that will cause them embarrassment in the fall.

And when Susan Collins said what she said about Roe versus Wade, I really heard her saying don't send me somebody appear who's going to jam me and embarrass me and force me into a tough vote on that issue of precedent and Roe versus Wade. And of course I think that's probably what Senator McConnell would prefer, too, to just do this on the basis of Republican votes. We'll see what the White House, what kind of response she's going to get out of the White House on that.

SCOTT: But for instance, a couple of names that are considered frontrunners on the president's list this time around were also on the list when he nominated and successfully placed Neil Gorsuch on the bench.

TOM ROGAN, WASHINGTON EXAMINER: And one of the opportunities the president has here is it's both the best way he can unify the Republican Party around him as the leader and also the banner man now, that there is a sense of unity with tax cuts, but also with the appointment of well-regarded justices, and Neil Gorsuch obviously very much respected across the judicial spectrum, including by liberals who opposed him on certain issues.

I think you can see as well the president trying to take that narrative forward with these selectee, who, again, are respected and to try and push Democrats into the position of do they challenge them at risk their own position in those Senate seats, or, and this is where Trump has the opportunity, or do they vote with him and then put themselves -- it goes into the feuding inside the Democratic Party. See obviously with Cortez- Ocasio, the new wave of Democrats who want to lead that momentum forward to the next presidential election. You can create this warfare in the party. So Trump is in a strong position I think.

SCOTT: And you echo something the president himself said. We are about to play that sound. He's looking out there at the political landscape, and despite his poll numbers, he thinks he's in a very good place. Listen to what he told Maria Bartiromo.

TRUMP: Between Maxine Waters and Nancy Pelosi and getting rid of ICE and having open borders, and the biggest thing, you have open borders, all that's going to do is lead to massive, massive crime. That's going to be their platform. Open borders, which equals crime. I think they will never win another election, so I'm actually quite happy about it.

SCOTT: Do you share the president's belief on that, Mollie?

HEMINGWAY: You should never predict too far out in advance, but you have a problem, again, with the Democratic Party. A lot of people have invested in just resistance at all cost, obstructing everything. The people who have not done that, who actually are running on an agenda, are extremely to the left of the mainstream of the American public. And so it will be difficult to have that message such as the one that won the day in the primary in New York democratic socialism. That's not going to resonate quite as much in tougher districts. So it is a challenging moment for Democrats, but both of the approaches they have taken her problems, both of the obstruction and far left.

SCOTT: And senators like Amy Klobuchar have said you can't get rid of ICE.

LANE: What's going on here is fascinating, which is that in some ways the base of the party is running away from its leadership in Washington. Chuck Schumer would never have chosen the message to abolish ICE. He never would've chose the message democratic socialism, but the voters out in Queens, those who showed up, they chose it. And this has got a life of its own on social media. It's got a life of its own at the grassroots way beyond the sort of perception of the senators in the leadership in the House here in Washington. I'm not sure they really know how to handle it.

SCOTT: But to the president's delight, that is the issue that is making headlines this week.

ROGAN: Democrats are stuck in a difficult position in the sense that, as Charles says, there is that populist fervor towards this issue, that ICE is immoral, it should be decapitated. But on the president's side, he truly believes, and I think frankly he's probably right, that the margin of the general election contest, which is ultimately what matters, it won't play well to say get rid of law enforcement.