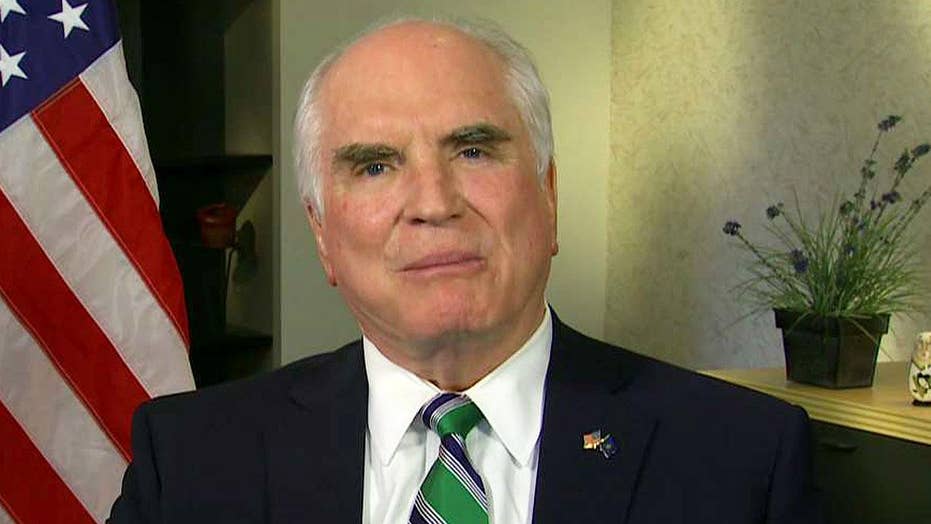 Kelly: We have got to have a stronger place in the world

On 'Your World,' congressman sounds off about the Iran nuclear deal and tax reform

This is a rush transcript from "Your World," April 20, 2017. This copy may not be in its final form and may be updated.

NEIL CAVUTO, HOST: All right, I want to take you back to Paris here. We're getting some new developments.

The Paris authorities are saying that there does now appear to be no evidence of additional shooters, that there seemed to be one attacker working alone. That flies in the face of earlier reports that seemed to cite at least two attackers.

If that is so, that does change the dynamics of this a little bit here, but Paris authorities, like our own State Department, avoiding or telling those in the Champs Elysees area to avoid it, that it's in virtual lockdown, as you can see from some of these earlier reports.

But, again, if this is right, two people killed, including the policeman who was killed at a traffic light. The gunman who killed him was shot down, so two total dead, including the attacker, but no additional attackers, the scene right now in Paris, where it is 10:48 p.m.

With me right now is Republican Congressman Mike Kelly. He's a member of the House Ways and Means Committee.

And certainly enough domestic issues to get into with him, but, Congressman, if you will indulge me first on these developments that you're seeing abroad and what you make of them.

The president referred to it as a terrorist attack. We don't know that unequivocally. We do know it's terrifying. So the semantics might get beyond the point here, but that it's a reminder that, you know, throughout the world that this is still very much a fear, isn't it?

And I think the thing that is most alarming about it, Neil, is it's commonplace now. This isn't rare. This is not from time to time. It seems consistent. And it just seems to me that, no matter how you label it-- we can't call it a terrorist attack yet because we can't confirm that this man was a terrorist.

You said it correctly. There's terror in the hearts of many people right now right here at home and as you go abroad. Traveling right now is one of those things you really have to be careful of where you're going and feeling safe about it, especially if you're taking your wife and your kids.

You really want to be careful. And that's just -- that's the world we live in. And that's why it's so important for America to regain its strength and be at that position at the top, that leader that everybody else looks to.

We can't be the world's policemen, but we can certainly be that country, that nation, that government that people can turn to in times of real need and know that they are going to be there.

CAVUTO: Congressman, is it your sense that yesterday, at this time, Secretary of State Rex Tillerson was looking at Iran, and citing a number of incidents with very provocative behavior, whether encouraging rebels in Yemen to work to help overthrow the Saudi government, or concocting anything it can to breed disarray in places as far-flung as Syria, that maybe that terror link and that consistent pattern of bad behavior is something that should have us revisiting us the agreement we signed to give them the money, tens of billions of dollars, so that they wouldn't develop nuclear weaponry?

They seem to want to open that up again. Do you?

KELLY: Well, listen, we can open it up.

But we now know that the agreement that was forged by the Obama administration was bad from the very start. I was shocked, really -- I was in Congress when this was going on -- the fact that there were actually members in Congress that were OK with this going forward.

We're talking things around the edge and saying, somehow, we had a victory? They had the victory, not us. Now, I understand it would be very hard right now to go back and redo it. In fact, there's many people saying we can't do it.

But I will tell you this. From where I sat then and from where the president sits right now, we have got to have a stronger place in the world. But other people did it for economic reasons. They wanted to get into that market, and so they made that agreement to reduce the sanctions.

Listen, there's nothing that works more on people than cutting off their cash. That brings them to their knees. I thought that the agreement that we made early on was an absolutely horrible agreement, really hurt people in that part of the world, and really encouraged and emboldened that behavior.

CAVUTO: You might be right, sir, but I guess what is raising some concerns is that the secretary of state had written off and gotten back to the speaker and the Congress Iran appears to, for the time being, honoring this agreement, and then this statement yesterday.

Are you aware or that he came upon new information that made him rethink signing off the letter that he did that they seem to be complying?

But the only information I'm getting, Neil, are bits and pieces.

KELLY: When we get back to work next week, I think we're going to get a briefing on that.

We need to know in detail what we know now that we didn't know before and what has actually happened.

All right, now, you talk about coming back to work next week. And there's talk that a lot of you guys are very close to hammering out a more promising repeal and replace Obamacare effort. This one apparently has the support, we're told, sir, of up to 20 of the so-called Freedom Caucus members, of which I think for a time, or you still might be a member, right?

KELLY: No, I was never a member of it.

KELLY: I have a lot of friends that are on the Freedom Caucus.

And, quite frankly, I don't know who all is on the Freedom Caucus. But I have got friends in the Tuesday Group, too.

CAVUTO: OK. So, the Tuesday Group is the moderate bunch.

But you're not a member of either the conservative Freedom Caucus or the Tuesday Group?

CAVUTO: You avoid those kind of clubs.

Well, if that is true, the reasons why the markets are racing ahead, as I'm sure you heard, Congressman, is that that might be greasing the skids for a tax deal. The treasury secretary was on the Hill today, essentially saying that, that things look good.

KELLY: I really do. I'm very optimistic about it.

I understand the latest polls show that 71 percent of Americans really want would like to see their taxes reduced. I'm just trying to figure out where the other 29 percent were.

I don't talk to anybody that says, you know what, Kelly, I'm really great with having to pay a lot of taxes. Please up my taxes.

So I'm not sure I understand the poll of what the question was that was asked. I'm very optimistic about it. I'll tell you why I'm optimistic. Finally, finally, we have somebody sitting in the executive position that has actually been an executive and understands how things work, and not how we would wish they would work, and really is a guy that came up through the trenches and understands it.

Now, all tax reform is going to take place. Look, it should go through a regular process. I don't like top-down pieces. I like where the general public, where we get to have people come in front of our committees, people from the private sector, people whose lives we're affecting.

I -- and I think that the president has the ability to do that.

So, we have got to move forward for it, with it, and we have to do it as pro-growth tax reform that addresses the needs of the American people.

CAVUTO: Congressman Mike Kelly, good catching up with you. I appreciate it.

KELLY: Thanks, Neil. Thanks so much.