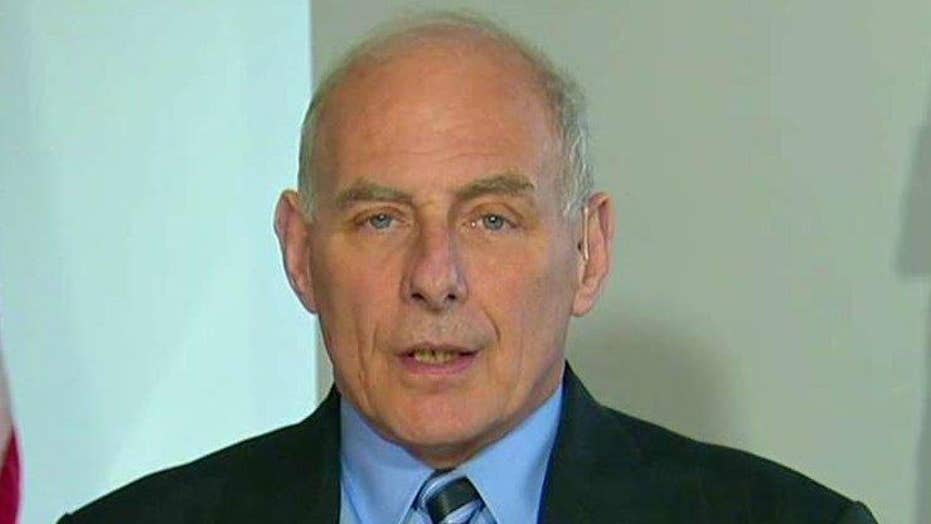 Department of Homeland Security secretary speaks out on 'Your World'

NEIL CAVUTO, HOST: All right, what do you think keeps Homeland Security Secretary John Kelly up at night? Something half-a-world away, something like North Korea, something like an imminent threat, he says, before the next election.

I mean, he's on the march. Clearly, his intent is to get a missile that can reach the United States. And he -- it's no secret that he's working hard to weaponize a nuclear device. And when those two come together, then certainly parts of our country are at grave risk.

CAVUTO: Secretary, I know you cannot reveal what went on at this briefing yesterday with 100 senators yesterday at the Eisenhower Executive Office Building.

But several came out, including Democrats, who said it was very sobering. Now, was part of that to show the activity on how he's advancing there and our options, or what?

KELLY: Well, I think, for sure, what he's doing every day and what he ultimately wants to do to have a weapon, that, certainly once that happens, it changes quite a few -- quite a bit of the equation.

CAVUTO: Now, others have said -- you weren't at the briefing, I know -- that he wouldn't be foolish, that Kim Jong-un wouldn't be foolish, because any provocative action he would take guaranteeing a U.S. response or even anything as threatening as launching a weapon on anyone, would mean his own certain demise, as well as most of his country and the peninsula.

KELLY: Yes, I think he's a calculating kind of person.

From this distance, we can't tell whether he is sane or not. I would make my assumption that he's certainly self-centered, very, very interested in his own survival. But you know, it's just like in the Cold War. When a country has a deliverable nuke, that changes how you deal with them, changes the equation.

And, oftentimes, the threat or the fear is that other countries will respond by acquiring nuclear weapons. And the more people with nuclear weapons on the planet, the more unstable the planet is. So, if he gets one, it does change the equation, whether he uses it or not.

CAVUTO: Secretary, much has been made of our use in trying to work the China card and see what they can do to ease this crisis.

Is there a timeline on that, a timeline you have, the president has, by which time, you know, the Chinese have to do something?

KELLY: Yes, I think the president -- not to put words in his mouth.

Well, let me say, I think the administration, the secretary of state and others are confident that the Chinese will do the responsible thing. It's not in their interest at all to have a nuclear-capable North Korea. It certainly isn't in their interest to have hostilities break out.

I think their probably their greatest fear is that you would have a mass migration out of the peninsula, out of North Korea. So I think that's where the Chinese -- it's certainly in their interest. And I have thought about it a great deal. I can't see why it would be in their interest in any way for North Korea to continue doing what they're doing and ultimately acquire a nuclear weapon.

I just -- they're a responsible people, I think, in many, many ways. They obviously have national interests. And it's just not in their national interest in any way to have a nuclear-capable North Korea.

CAVUTO: Separately, this doesn't correctly concern you, sir, but it does raise concerns about the security issues here.

The Pentagon has opened an investigation into whether former National Security Adviser Michael Flynn violated any of the existing laws by taking payments from foreign governments, notably Russia, and that Russia might have exacted unfair influence as a result.

Now, he did pass all the security measures and checks that were in place with the prior administration. But are you now worried that maybe those security checks weren't thorough enough?

KELLY: You know, I have known Mike Flynn for some years. He's obviously a retired senior officer in the U.S. military.

It's beyond my ability to imagine that Mike would be anything other than a loyal, patriotic American. I don't know about the rest of it. I have read the paper. I know there's a few more revelations today. I'm not aware of what they are.

But, no, it does not concern me that Mike Flynn may have been influenced by another nation.

CAVUTO: It did raise questions as well, not that they directly pertain to you, sir, about whether the security checks we go through for top officials, security officials, including yourself, have to be tightened now in light of this. What do you think?

KELLY: Well, having gone through it, Neil, it's the most excruciating experience of my life.

I held a top-secret SCI clearance for, I don't know, 25 years in the Marine Corps. Every year, we had to do financial disclosure statements, periodic polygraphs in some cases, in many cases.

No, I think it's right where it ought to be. The fact that maybe an individual -- and I'm not suggesting General Flynn did this, but an individual may forget to put something down, or saw it as not as important as it should be, but I will tell you this.

The process I just went through, they completely ignored my last 25 years. Started from scratch. Had to submit, again, financial statements, my tax records, anything and every -- any foreign contact that I have had, anything and everything. And then they checked it, the FBI.

So, I think the process -- I can't imagine how much tighter it could possibly be.

CAVUTO: So, even in his case, if it involved paid speeches or any of the like, would that have come up in the natural course of events, or would they have to be volunteered?

KELLY: I think, ultimately, it would come up in the natural course of events.

And I think probably -- I'm not -- again, I'm not sure about this case, but I have got to think that's how this thing was -- eventually came to light.

Sir, if I could switch gears here, ICE, of course, it came to light, talked about a Mexican man who had been detained for overstaying his visa for 14 years. And it did prompt a question. I know you're trying to address this right now, newly into office, that it isn't so much illegals as much as those who have either extended or gone beyond their visa.

And how do you police that?

KELLY: Well, there's a couple of variations on this.

And, believe me, my one takeaway, 98 days on the job, is our immigration system is so complicated, almost unworkable. And we need to somehow simplify it.

But there's a couple of ways certainly in the current administration that you might be removed from the country. The first would be, say, the tremendous men and women of ICE, they develop target packages on individuals.

So, the start point is you're here illegally. And then after that, you have a criminal record of some kind. That starts the process. They develop target packages.

The best way for this to happen is for ICE to be -- to work with cooperative police agencies, so that, as an example, when someone finishes his or her prison term or jail term, ICE can go down there, pick them up, and deport them. That's the best way to do it. It's the most efficient.

And, oh, by the way, it's the safest way for the community and for my ICE agents. So, that's one way.

So, in many cases, someone will be going through that system, they will get their final appeal done, the judge says you're to be removed, and off they go. So, that's kind of basically the two systems. One is ICE agents targeting, going after you because you're in violation of the law, and the other one being the normal process by which you exhaust all of your appeals, and an immigration judge hits the gavel and says you're going home.

And that's the way it works. And it's all based on law. Immigration, judges and ICE agents do not deport people. The law deports them. The judges and the agents are just the agents of that process.

CAVUTO: And if you can deport them, right?

As you know, in this case, with sanctuary cities, sir, that's being challenged in San Francisco right now over the issue of whether federal funds can be denied those areas that protect illegals within its borders.

What do you think of that and how it complicates your job?