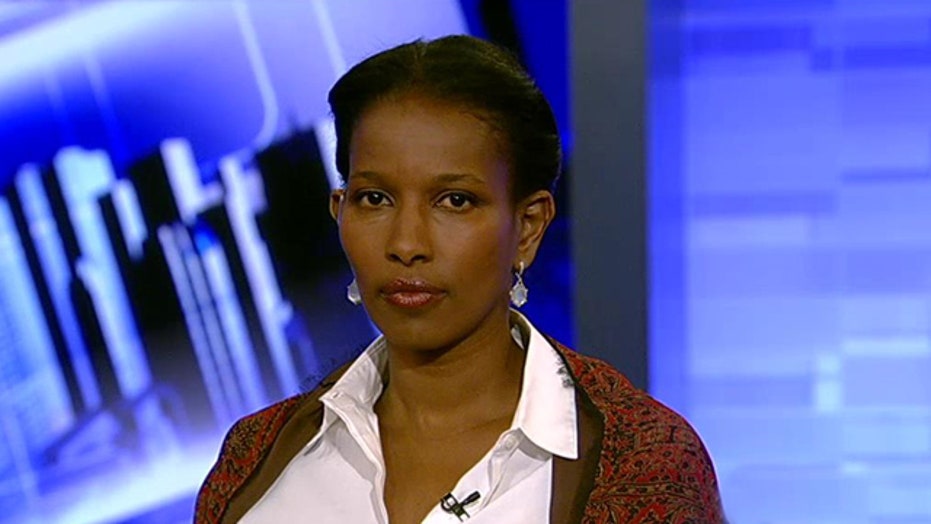 This is a rush transcript from "The Kelly File," May 24, 2015. This copy may not be in its final form and may be updated.

On a warn Sunday evening May 3rd of this year, two would-be Jihadis armed with assault style weapons and dressed in bulletproof vests drove more than a thousand miles from Phoenix to Texas to attack an event they saw as an insult to the Muslim faith. Thirty-year-old Elton Simpson and his roommate 34-year-old Nadir Soofi, were reportedly sympathetic to the Islamic state terror group and Simpson had been on the FBI's radar for some years.

The two were killed in the attempted attack, but they did succeed in touching off a new and heated debate about radical Islam and how best to confront it. The pair had targeted a cartoon contest that featured caricatures of Muhammad, considered a prophet by Muslims. Followers of Islam deem that any physical depiction of him, even a positive one, is blasphemous.

Immediately after the incident, a number of people started criticizing the event's organizers, Pam Geller included, for, quote, "going too far," and, quote, "deliberately provoking, even inviting the attack."

We'll get to that issue just a little later in the show.

But first comes the question of how best to deal with a dangerous faction within Islam which is attracting new converts like Simpson and Soofi every day. In recent months we have spoken with several Muslims and former Muslims who have become leading voices for reforming their faith.  They have risked much to take this stand to defy the sword of the radicals and have suffered anger, scorn, even death threats as a result.

Tonight, you will meet them, hear what they think about the problem and learn why they do what they do knowing it could cost them everything.

Trace Gallagher starts us off tonight with a story of a woman by the name of Ayaan Hirsi Ali.

TRACE GALLAGHER, FOX NEWS CORRESPONDENT (voice-over): From her biggest advocates Ayaan Hirsi Ali receives the highest praise. From her strongest detractors she receives death threats. And day-to-day she has no idea which side she'll come in contact with, and yet she continues to fight for women and against Islam. Because she says it's where her journey has brought her.

AYAAN HIRSI ALI, ANTI-ISLAM ACTIVIST: I remember distinctly as a teenager when we just used to be regular Muslims and when things started to change and members of our own community started to preach, they called it Dawa, and what they were preaching was hostile to women.

GALLAGHER: Hirsi Ali was born in Mogadishu, Somalia, the daughter of a Somali politician, an outspoken man whose political opinions at times cost him his freedom. The family left Somalia for Saudi Arabia, then Ethiopia before finally settling in Kenya. Throughout her school years, she received a strict Muslim education, but in 1992, to escape what she says was an arranged marriage to a distant cousin, Hirsi Ali fled to the Netherlands and was given political asylum.

After graduating with a masters in political science, Hirsi Ali became a critic of Islam and the Dutch government. But it wasn't until 9/11 after listening to Usama bin Laden cite the Koran to justify the attacks, did Hirsi Ali become completely disenchanted with Islam, saying it must be defeated and crushed.

In 2003, she ran for and won a seat in the Dutch parliament, championing immigration reform while still fighting for the rights of Muslim women and against the abuse of young Muslim girls for being subjected to female genital mutilation, something her father also opposed. But because he was in prison, Hirsi Ali's maternal grandmother had the procedure performed on her at the age of five.

GALLAGHER: In 2004, she worked with filmmaker Theo van Gogh to create "Submission," depicting Islam as a religion that abuses woman. Several weeks after the film aired on television, Van Gogh was murdered with a letter pinned to his body calling for the death of Hirsi Ali. She was asked on "The Kelly File" about any regrets in making the film.

KELLY: Do you wish you didn't make the movie?

HIRSI ALI: Absolutely not. I feel the only way we really have a chance of fighting these barbarians is by talking about it, by expressing ourselves.

KELLY: And it's worth it to you, despite the danger that has obviously been posed to your own life?

HIRSI ALI: It is worth to me because I love life more than I love death. They love death. That message is so much stronger than anything they put out there.

GALLAGHER: In 2005, Time magazine named Hirsi Ali one of the world's 100 most influential people. In 2006, Readers' Digest named her European of the year. She's now a fellow at the Kenney School of Government at Harvard University. She has also written several books, a regular and often controversial speaking engagements and founded an organization for women's rights. Hirsi Ali now claims to have a better understanding of radical Islam.

KELLY: You actually do understand this ideology.

HIRSI ALI: I understand it, and they make very clear what it is that motivates them.

KELLY: Joining me now, the founder of the Ayaan Hirsi Ali Foundation and author of the new book "Heretic: Why Islam Needs a Reformation Now."  Ayaan, great to see you.

HIRSI ALI: Thank you so much for having me on again.

KELLY: This is a very bold, brave book. And you go right to the heart of it talking about how the problem in your view is within the Islamic faith itself. You're calling for a reformation that's a five-point plan. And at heart of the plan one of the things that you push is that the Islamic faith needs to get rid of Sharia law in response the critics say that guts the entire faith altogether. You're asking Muslims to turn into atheists. Is that a fair charge?

HIRSI ALI: I think it's an unfair charge, in considering these five amendments that I'm proposing, I asked myself the question that some of my Muslim students asked me when they challenged me and said, if you take this out, what's going to be left of Islam? Well, praying five times a day is going to be left, fasting in the month of Ramadan, taking care of the poor. If you want to two to Mecca, you can do all of that and you can confess to believing in one God and Muhammad being his prophet.  And if you do those things you can still be a Muslim along with all the other traditions and rituals of, you know, you can enjoy religion as a function of community and social spirituality without hurting other people.

KELLY: But you want to get rid of -- you want to change people's attitudes towards the Koran, you want people to believe and focus more on life after death as opposed to death after life.

HIRSI ALI: Well, I want people to emphasize life before death as opposed to life after death. This life after death thing, we've created a narrative of death. You have mothers ululating when their sons kill people and in the process die. They celebrate them because there's this belief that was developed over years that if you die, you're going to be rewarded in heaven and that reward is clearly spelled out. We need to get rid of that. We need for Muslims to say, especially American Muslims, Western Muslims, distance themselves from that narrative of death.

KELLY: Let's talk about you and your story. Because, you know, Trace walked us through it, and what happened to you. I mean, you know, from the mutilation all the way through to the murder of Theo van Gogh with a knife in his chest calling for your murder. And, you know, to this day your life is threatened and in jeopardy because you have spoken out. How do you do it, Ayaan? I mean, under such threat 24/7.

KELLY: And when we see that it's not like these terrorists are standing down. I mean, we see these murders just in Texas the attempted murder for just drawing Muhammad, never mind saying what you say. How do you do it?

HIRSI ALI: It's exhausting, but it's worth it. And I honestly don't see any other way of, again, exposing this agenda of Islamists. They have this ideology, they're targeting Muslim individuals. I was a Muslim individual within a Muslim family, in a Muslim neighborhood. They penetrated our neighborhood and our schools and they convinced me as a teenager that this was a better narrative for humanity.

KELLY: But there was a time that you believed as they believe?

HIRSI ALI: Exactly. And I was convinced and I didn't have my faculties of critical thinking developed. And over time -- I'm now 45 years old. Over time, of course, I've come to understand that if back then we had as children, as teenagers, as young adults, if we had our faculties of critical thinking developed we would have completely told them, oh, no, no, no, I'm not going to offer my life for what you believe, and why should I?

KELLY: How did you get pulled out of it?

HIRSI ALI: In many ways, of course, I was fortunate, but I have had the fortune to be educated. I left the path that my father chose for me.  I didn't go to Canada to live with a husband that he picked for me.  Instead I asked for asylum in the Netherlands. And there I started to ask the questions. And I'm very fortunate and very happy and I thank my professors at Leiden University for teaching me how to think, not what to think. And by the time 9/11 came around, I was 31-years-old, I thought, goodness, do I agree with what these young men did? No, I did not. Then that means I'm distancing myself from the Koran and from the Prophet Muhammad. But if I do that, I'll go along with my conscience.

So I had this conflict between my own conscience and what I was being told, you know, by my God in the Koran and by my prophet. And I decided to go along with my conscience.