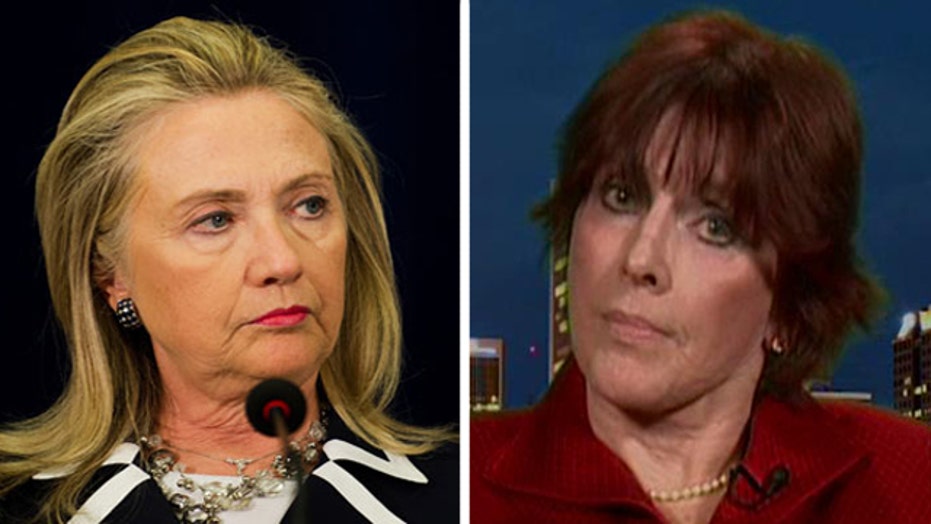 Kathleen Willey: Hillary Clinton is the war on women

This is a rush transcript from "The Kelly File," February 18, 2014. This copy may not be in its final form and may be updated.

MEGYN KELLY, HOST: Well, in the weeks since the so-called Hillary Papers hit major media outlets, there's been a lot of attention on what's in those papers -- the personal notes of a woman Mrs. Clinton called her best friend -- and how it could impact Hillary Clinton's 2016 presidential bid. Many on the left complaining that any discussion about the Clinton's handling of Bill Clinton's affairs and alleged misconduct, which is discussed at length in these papers, is sexist, even misogynistic.

But my next guest has a different point of view. She's been a victim of the Clintons, claiming they harassed her and intimidated her for years. Her name came up in the Hillary Papers when a then little known journalist by the name of Matt Drudge wrote a report about woman named Kathleen Willey, about President Clinton and about her claims that he sexually groped her in the Oval Office.

Well earlier, I spoke with Ms. Willey about all of this. She was a little nervous, and recovering from some neck surgeries, but she had a lot to say.

After all this time, your name surfaces again through no fault of your own, they're in the Hillary Papers that were kept by her friend which have just become public. They talked about you, and your allegations that President Clinton groped you in the Oval Office against your will many years ago. You were a long-time supporter of his, and a volunteer in the White House, and that was talked about quite a bit in the 1990s. You've come out now and said, you do believe this is relevant to any potential run to Hillary Clinton in 2016. Why do you think that?

KATHLEEN WILLEY: Hillary Clinton is the war on women. And I think that she needs to be exposed for all of the terror campaigns that she's raised against women who were in the wrong place at the wrong time with her husband. And it's been going on since before they were married. That's how she handles it. Instead of -- she enables him to do it because she realizes the power that he has, and she wants to ride on his coat tails like she's done all along. The easiest way for her to handle scandals is to ruin the women who just happen to be -- cross passed with him. And that's horrible, and they do a good job at it.

KELLY: We've heard so many people say this should not be an issue for her candidacy. In fact, Mitt Romney came out and said that just this weekend, because many are saying Bill's affairs -- you know, or misconduct, he was referring on the allegation, don't bear any relevance to her, and to tar her with that brush is unfair.

WILLEY: I disagree because if she's going to run on women's issues, like she says she is, and she's going to accuse Republicans of this war on women, I think she needs to be exposed for the war that she's waged against people -- waged against people like me. I mean, she has choreographed every single investigation and every terror campaign against every single woman practically who she thinks might be a problem. That's how she handled it. How can you be a champion of women's rights and turn around and do what she's done to women like me? It just doesn't -- it just doesn't make sense.

KELLY: She came out in the papers and referred to Monica Lewinsky as a "narcissistic loony tune" and seemed to downplay Bill's behavior with her by saying, look, you know, he tried to handle it, once it got out of control, but they never had sex in any meaningful way.

KELLY: It gave us a window into her thinking, at least about that one affair partner, whatever you want to describe Monica Lewinsky as. What were your thoughts on it?

WILLEY: It sounds to me like, it all depends on what the meaning of the word is is. Who cares what kind -- what kind of sex they have? It is what it is. If she wants to -- if she wants to play that game, then fine, but all she's doing again is she's enabling his behavior. And I don't know, if she wanted to save her marriage, because this has been going on since before they got married, and she found out about it, everybody -- everybody deserves a second chance. And I think that she should have said to him, all right, we need to work on this, you have a problem, maybe we have a problem, and I want you to get help, so this won't happen again. That's the way she should have managed it.

KELLY: None of which were fully established in a court of law, and they disputed all of it. But I want to ask you this, if it's not directly relevant to Hillary, then viewers can make their minds up about whether it is based on the case you made. Do you think it's relevant to the American public in assessing the character, the behavior of our potential first gentleman?

KELLY: What do you think -- what do you think of the behavior, because some on the left as I said in the introduction are saying it's misogynistic and it's sexist to even this discussion, even though, you know they talk about history -- in fact, there's a documentary coming out next month on Clarence Thomas' alleged sexual harassment of Anita Hill, and that, some on the left have a lot of interest. In Bill Clinton's alleged misbehavior, not so much.

WILLEY: He gets a bye. Well, it's a double standard. It's always been that way, it's never going to end. I can't see it ending any way, it's just a double standard. It just is. I mean, if George Bush or any other person had done what Bill Clinton did, they would have been gone. They would have been gone. I mean, it's just that simple. He just got a bye and he continues to get a bye. And she continues to enable his behavior and looks the other way, and that's the way it is. I mean, it's wrong.

I think the thing that bothered me the most when I was reading the article last Monday, the thing that bothered me the most was when she was having a discussion with somebody about how they were going to handle Gennifer Flowers, and she was trying to find a way to hang a crime on her, she wanted to send that woman to jail, and that's when I thought, you know, this isn't right. This is not right. It's just not right.

I think it should be discussed. We're talking about the president of the United States and what he did, lack of judgment. He dishonored the office, he dishonored the presidency, and she just stood by and watched. And it looks like she's going to keep on doing it.

KELLY: Let me ask about you because your detractors say Ms. Willey claims that President Clinton groped her inappropriately in the Oval Office, but then there were letters you sent to Bill Clinton afterwards signed fondly and they were written in a nice tone. It didn't sound like somebody who had been necessarily sexually groped against her will. This is what your detractors say, and then they point to the fact that a long time ago you had an incident where you claimed a false pregnancy by a man, and it turned out not to be true. You're caught to being dishonest on that. So, your detractors say, she is a dishonest person. What do you say to those two points?

WILLEY: I'm human. I'm human -- I'm human, OK? I've already talked about that, I've already made my amends. I'm human, I made a mistake. It was a hard time in my life and I'm going through a lot. I'm not making excuses, what I did was wrong, I just did. And I made amends for it, and acknowledged the fact that what I had done was wrong.

KELLY: Do you ever talk to Monica Lewinsky, Juanita Broaddrick, Paula Jones, any of these women?

KELLY: And yet, when you look at the Clinton's approval ratings, both of them, they're sky high.

WILLEY: Go figure. I don't know many, maybe it's just -- a lot of this I think now with Hillary is, you have got the -- the younger women who are looking at -- it's going to be really cool to have the first woman president, and I'm going to vote for her, and they have no idea about what she stands for, who she is. They're just going to vote for her because it's going to be cool to elect the first woman president.

I just think women like that should be -- they should be educated, at least tell them what has gone on from your own experience. Because, Megyn, what happened to me, it was terrifying -- it was terrifying. And what they do, a lot of the times women like me, we were single at the time, we were living alone, break into your homes, your cars -- my car was vandalized. I had pets that went missing. I was getting strange phone calls. I was really starting to feel -- I was just starting to feel like, you know, I was really in trouble. And it was hard for me to admit it.

KELLY: I want the viewers know there's no direct evidence tying the Clinton's to any that. That's your belief that they were behind it, but they've denied it, and you've outlined it in your book --

KELLY: Kathleen, I've got to run.

KELLY: But listen, I appreciate you coming on and expanding on it, your name has been all over the headlines lately, so we figured it was worth talking to you, and we appreciate you being here.