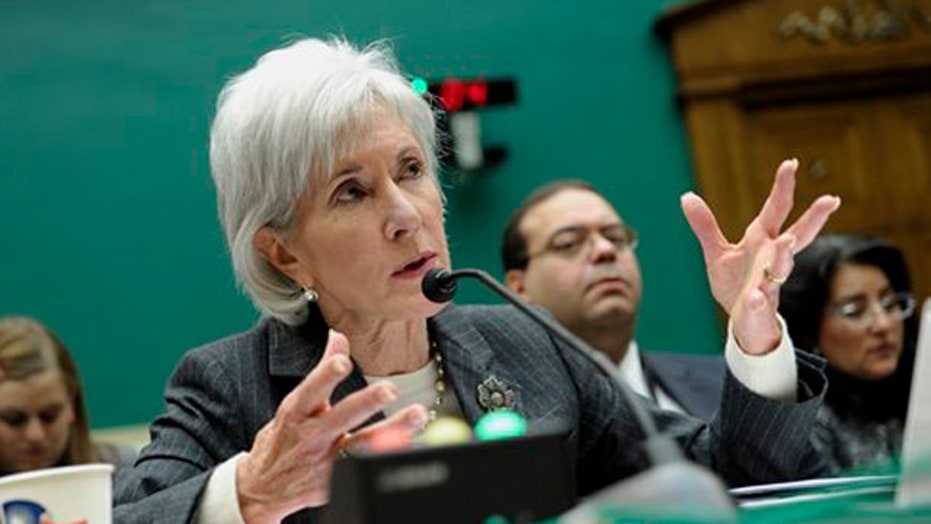 This is a rush transcript from "Hannity," December 12, 2013. This copy may not be in its final form and may be updated.

SEAN HANNITY, HOST: And welcome back to "Hannity." Now, things are going from bad to worse for embattled Health and Human Services Secretary Kathleen Sebelius. Now, her department is now being accused by one of the most powerful men in Washington of, quote, "criminally obstructing" the House

Earlier today, Chairman Issa was on "FOX & Friends" and he explained. Watch this.

REP. DARRELL ISSA, R-CALIF.: The fact is that Kathleen Sebelius is not providing America the truth. As a matter of fact, in a letter that I sent to her, I warned her that her people are actually obstructing justice. They're telling individual companies who have serious reports on security flaws -- in other words, vulnerability to hackers -- not to provide us the information.

HANNITY: We turn back to our studio audience. Penny Nance, here we have one of the worst rollouts, one broken promise after another. But it's the same thing as Benghazi, same thing as targeting conservative groups.

NANCE: You know, besides the problems with affordability, accessibility, quality of care, there are serious problems with religious liberty in this law and...

NANCE: Let me finish my thought!

HANNITY: Hang on. Let her -- let her finish. Go ahead.

NANCE: Let me finish my thought. Kathleen Sebelius is withholding serious information. Congressman Shimkus asked her on October 30th to give him a list of the insurance companies that are providing abortions so people could choose simply not to purchase them. She told him that she would give him that information and now has backpedaled and refused to give it!

The reason he asked for it is because it's so obfuscated within the website, it's so difficult to find, the average person doesn't know

HANNITY: Tamara Holder's about to have a...

UNIDENTIFIED FEMALE: We want everybody to have a choice. And my choice is not to pay for your abortion or your...

HANNITY: Wait a minute! Listen to what she just said.

TAMARA HOLDER, FOX CONTRIBUTOR: I listened to what she said about religious freedom...

HANNITY: Help me out here.

HOLDER: No, no, no. I can't. I can't help you out here because this is bananas!

HANNITY: All right, let me -- can I get in a question?

UNIDENTIFIED FEMALE: No, you can't!

UNIDENTIFIED MALE: By the way, this is why people don't vote for Republicans anymore.

HOLDER: Sean, you have a duty to your audience. You asked a question about Darrell Issa, who sent a letter warning. Well, guess what? If you're a powerful member of Congress, your warning letters are not -- are not sufficient. Send a subpoena. This is not a conversation about religious liberty and religion.

UNIDENTIFIED FEMALE: Why not?

HOLDER: We can have that conversation on a different issue, but not about Darrell Issa.

UNIDENTIFIED FEMALE: There's a civil war that's going on right now! This is the real war on women, Sean! You're seeing it play out right here on your show! It is a civil war when abortion advocates force women of faith to pay for services that we find morally reprehensible!

UNIDENTIFIED FEMALE: Hillary Clinton, in the case of Benghazi, stuck her neck out and her career out for the president of the United States. And what is Kathleen Sebelius doing? She's hiding behind the president here...

HANNITY: Why hasn't she gotten fired?

UNIDENTIFIED FEMALE: ... and the president is pushing them out in front! That is the real war on women!

JULIE ROGINSKY, DEMOCRATIC STRATEGIST: (INAUDIBLE) this whole abortion thing? First of all, abortion is not being covered by the taxpayers. I don't remember where...

UNIDENTIFIED FEMALE: Oh, yes, it is!

UNIDENTIFIED FEMALE: Yes, it is!

UNIDENTIFIED FEMALE: You're the party of choice, aren't you?

ROGINSKY: I do respect your choice. Don't get an abortion.

HANNITY: Hold on. Hold on. We got to talk one at a time.

UNIDENTIFIED FEMALE: No, no, no!

HANNITY: Wait a minute. Wait -- but wait -- she raises a good question. I tried to get Tamara to answer. I'll give you a shot.

HANNITY: Why should taxpayers fund for other women's birth control? And why should they contribute money to abortion when they find it morally reprehensible?

ROGINSKY: Excuse me. First of all, nobody's paying for anybody's abortion. I'm not even sure where you're getting that. Secondly...

ROGINSKY: Show me where in the bill they're paying for anybody's abortions.

UNIDENTIFIED FEMALE: ... administrated through our government!

UNIDENTIFIED FEMALE: Would you like for me to pull the bill out?

HANNITY: All right, let me move on because I'm having a hard time being heard.

SARA MURRAY, WALL STREET JOURNAL: I have to tell you the Republicans have a pretty potent argument when it comes to "Obamaçare." The abortion argument is not going to be the winning argument, if what you want to win is the broad population. And if you want to do the things you're talking about, Medicare, Social Security, big budget deals, you need to go beyond people...

HANNITY: You work for The Journal. Are you happy with this deal?

MURRAY: I'm not -- I work for The Journal, so I'm Independent on this deal. I think it's a bad deal for both sides and it's the best deal both sides are going to get.

HANNITY: Liz, what do you think? Liz?

LIZ PLANK, POLICYMIC SOCIAL EDITOR: I think this whole issue of birth control and abortion is quite sad because I'd like to know why we're not talking about who's covering who's Viagra.

HOLMES: Let's get to the audacity of the administration.

HOLMES: I'm not sure if you saw, but the excuse that the HHS gave Darrell Issa about why they are obstructing his investigation is for security concerns. They just built a website that is a hacker's paradise!

HOLMES: And now they're telling a congressman...

HOLMES: ... private contractors and private citizens in furtherance of his investigation because of these newfound security concerns?

UNIDENTIFIED MALE: Darrell Issa is that last person who should be investigating...

HOLMES: It is obviously lying!

HANNITY: He's the head of the Oversight Committee!

UNIDENTIFIED MALE: He's the last person to be investigating anybody.

HANNITY: All right, slow down. Let me -- let me ask you a serious question because -- we've had IT professionals, computer security professionals on the show. For example, they rate the safety and security of Amazon at a 10, HealthCare.gov a 1. And even the government now is recognizing that people are going on this Web site and their personal information is at risk!

Alan, we spent hundreds of millions of dollars and they had three years!

COLMES: ... and it was terrible and they shouldn't have spent that kind of money. But you don't need Darrell Issa to have a congressional investigation. This is a guy who said before he took the job as the head of this committee, I want to spend every hour of every week of every day investigating this administration. That's all this guy does! And he's got nothing!

HANNITY: Deneen Borelli, take us out.

DENEEN BORELLI, FOX CONTRIBUTOR: What's really unfortunate here is that Americans are hurting. They're suffering. Millions of people are losing their health insurance coverage. No one is being held accountable. No one is being held responsible for these people with their dire situation because of "ObamaCare."

HANNITY: He couldn't accomplish it in 100 visits to HealthCare.gov, so he had to spend money that he doesn't really have to buy him a policy.

HANNITY: No private company should do that.

I got to take a break. We're going to come back. More with our lively studio audience and our eggnog edition as we continue.