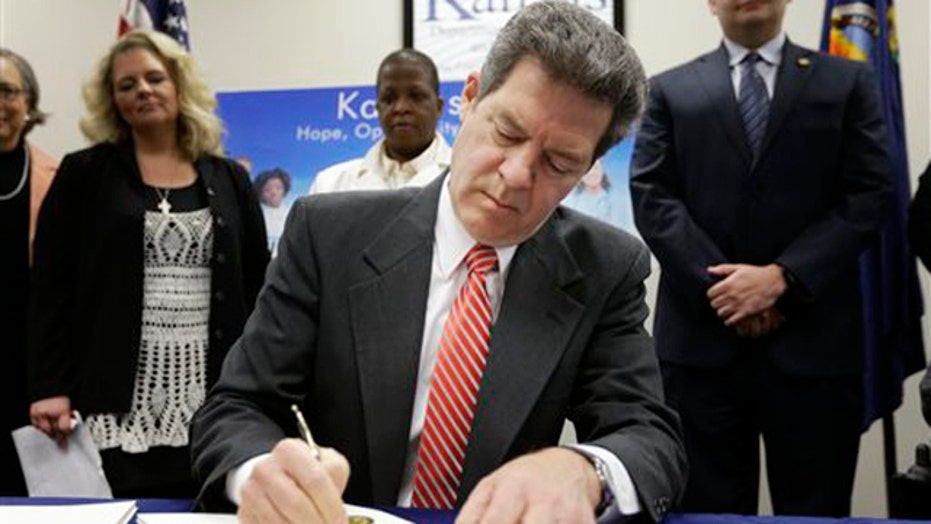 This is a rush transcript from "Your World," April 16, 2015. This copy may not be in its final form and may be updated.

Republican Kansas Governor Sam Brownback just signing a bill into law that limits where welfare cash can be spent. So things like massage parlors, cruises, concerts, you name it, they are all off limits. Why is he getting all this grief over it?

On the phone with us now, the governor himself.

Governor, good to have you. Are you surprised at the outcry you have generated?

GOV. SAM BROWNBACK, R-KAN.: I am, Neil, because this is something that the federal government has in their list. They have a series of things that you cannot spend TANF, Temporary Assistance for Needy Families -- that's what that stands for -- that you can't use it on.

And we have got a list, and so I really am surprised. Plus, the primary focus of the bill is to get people back to work, which is so critical to get them out of poverty and off the government programs and back into a successful life.

CAVUTO: Well, you know what happens, Governor? A lot of people say, no, he is going one step too far here. This is about automatically stating and assuming that anyone who is on welfare is a crook and a cheat. What do you say?

BROWNBACK: Well, then the federal government has already stated that.

They have listed a number of things that you cannot spend TANF, temporary assistance, money for. And I don't think that we are doing that.

Plus, again, as I said earlier, what we're really trying to do here is get people back to work. That's the heart of the bill. What I have been disappointed about is that so much focus has been put in this area of limitations, of where the taxpayer money can be used, and not on the heart of it, which is getting people back to work, which has happened.

We had over 6,000 people go off the TANF rolls and into private sector jobs this past year, year-and-a-half, and it's a much, much better way and it's a way out of poverty.

CAVUTO: But then how do you police it? How are they buying all this other stuff? I know they -- some have these EBT cards or they're debit- like cards. How much do you police that then? I mean, you would have to resize, retrofit them. What would you do?

BROWNBACK: I think there's some difficulties and it's not going to be foolproof.

But you then cannot use the card in those establishments. And that's where the limitation originates, or that's where it's found as quickly. Otherwise, you have to do fraud because cases, which we do fraud and a number of places do, but it's really limiting the place that you can use the card in, in the first place.

CAVUTO: Governor, we will watch closely. Good having you back with us, Sam Brownback of the fine state of Kansas.