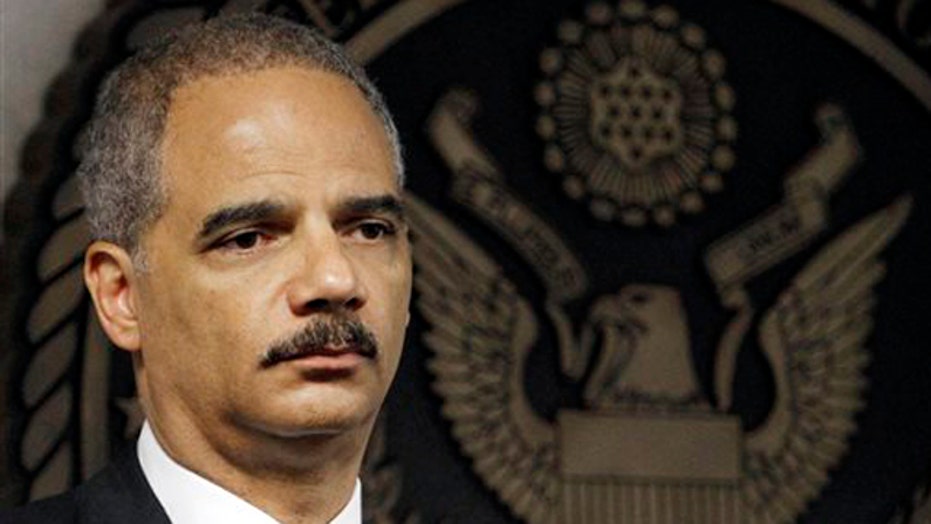 This is a rush transcript from "The Kelly File," January 16, 2014. This copy may not be in its final form and may be updated.

MEGYN KELLY, HOST: First on "The Kelly File," we are getting reports tonight that Attorney General Eric Holder is going to give into demands from civil rights activists and change the rules for certain investigations. The Justice Department will reportedly ban federal agents from using religion and national origin in their investigations. Reports suggesting the DOJ wants to specifically avoid upsetting Muslims.

Joining me now, Hoda Elshishtawy, she's national policy analyst for the Muslim Public Affairs Council. And Joel Mowbray, who is an investigative journalist. Thank you both so much for being here. And so, the question here is whether, as I said to O'Reilly a short time ago, whether he is also going to announce that no longer is racial, or I should say profiling based on religion or national origin, no longer will it be allowed in terror investigations. Hoda, what do you think about it?

HODA ELSHISHTAWY, MPAC NATIONAL POLICY ANALYST: Well, I mean, I think this is really a big deal if indeed the Department of Justice implements the banning of religious affiliation, national origin, and sexual orientation, as well. This is a big deal, because basically what it's doing is it is making law enforcement officers that's really strengthening the tools that they have in doing, in conducting really strong, hard, factual police work.

KELLY: How is it strengthening?

ELSHISHTAWY: So what it is doing is, highlighting the tools that law enforcement officers already have based on finding evidence, conducting --

ELSHISHTAWY: Well, and they're not effective tools. That is the problem and that has been the point. And what law enforcement officials have been doing, and when they are incredibly effective is when they are conducting searches and investigations based on actions and behaviors. Not based on what a person looks like.

JOEL MOWBRAY, FOUNDATION FOR DEFENSE OF DEMOCRACIES FELLOW: Well, I think Megyn, first of all, pretty clearly that we're talking about National Security cases. Because the Bush administration did ban racial profiling back in 2003, except in cases of National Security investigations. Now, when you're talking about race, that is different. But talking about religion or national origin, I think every American knows that during the 9/11 terrorist, 15 of them came from one country, Saudi Arabia --

KELLY: Well, not only that, have we look to the stats, since 9/11, the majority of attempted terrorist attacks on this country have come from Muslim individuals, radicalized Muslims who have tried to attack the country.

MOWBRAY: Well, no, absolutely. And if you're going to talk about religion, well, let's say the Christian identity movement, is it irrelevant, their religious beliefs how they view Christianity is not relevant to the terrorist threat profile? Of course it is. You know, if you talk about, let's say troubles, the Tsarnaev brothers, the Boston bombers, now we know they went to a mosque with radical ties in Boston. We also know the Russians warned us that they had been travelling in Chechnya, now you have to put the two of those together because travelling in Chechnya, or say Afghanistan or Pakistan does not necessarily make you a terrorist. But if you fuse that together with radical Islamic beliefs, then you have a different threat, major profile and something that you have to look at.

KELLY: What about that? If they say you can no longer use religion as one of the criteria for doing analysis or profiling, if you will, National Security, does that mean if our Feds know that somebody is a radicalized Muslim, they cannot consider, they can't even mention it in trying to get a search warrant, et cetera?

MOWBRAY: Well, that's what we don't know according to early reports.

KELLY: That's for Hoda, I mean, is that your understanding, and are you OK with that?

ELSHISHTAWY: Well, I think, I know for a fact that Americans are protected in terms of speech because of the First Amendment. And so, what do you mean by radical? Do you mean thoughts? Because the idea is that law enforcement should become involved in a situation when there are actions involved.

KELLY: So if they had reasonable profile -- if somebody believes in radical Jihad, let's take the Tsarnaev guy who was online with his radical thoughts, that's not OK, he should not have been profiled, in your view?

ELSHISHTAWY: So, profiling has existed. Right? And if it existed, then why did the Tsarnaev brothers fall through?

KELLY: No one ever said it is fool proof. Go ahead, Joel.

ELSHISHTAWY: It is ineffective and it's counterproductive to police work.

MOWBRAY: Megyn, clearly you have to look at the religious ideology, it's not to say that anyone who is Muslim is a threat. And that's not what the law enforcement threats it. But the ideology does matter. And it's not just someone who say, advocates violence.

You know, a lot of people become radicalized started by believing America was the enemy of Muslim, that there was a war against innocent Muslims and so they see themselves as white knights coming out to defend those innocent Muslims from they say the aggression of America, so they believe that they're acting ethically and morally. But if you don't know that about someone's religious views, then you don't know the full threat that they pose.

MOWBRAY: Look, when we have limited resources, Megyn, when it comes to National Security investigations, we have to use that in the most intelligent way possible, which means looking at all the relevant data point, which includes religious beliefs, national origin, where people come from, et cetera.

KELLY: Well, we'll see, we'll find out, we have to hear the official announcement -- I have to run Hoda, thank you both so much.