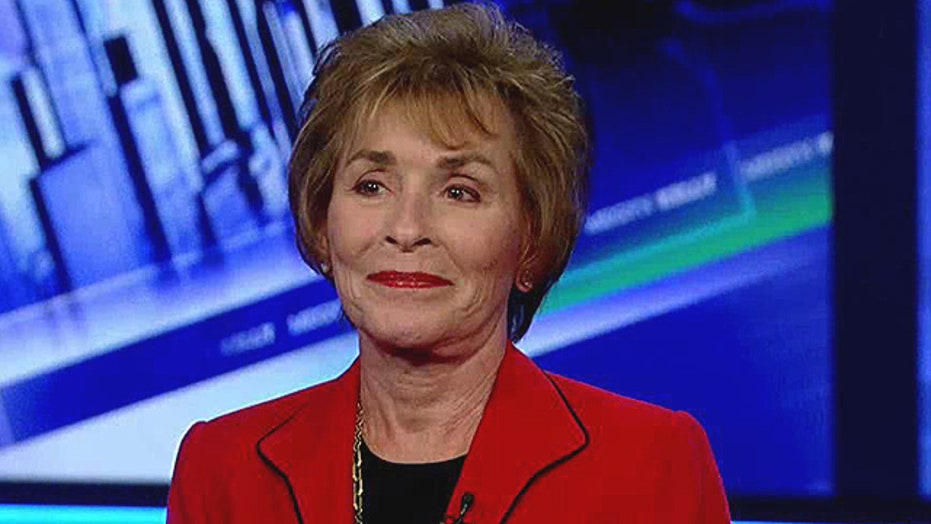 Has the government forgotten its vision about serving the public?

This is a rush transcript from "The Kelly File," October 11, 2013. This copy may not be in its final form and may be updated.

MEGYN KELLY, HOST: My next guest believes that we have infantilized this nation. She says we must stop the mediocrity, demand the best from ourselves and from our children in order to keep America a great nation.

Judge Judy Sheindlin is the presiding judge on "Judge Judy" and author of "What Would Judy Say? A Grown-Up Guide to Living Together With Benefits." Oh my gosh. She's here! She's here. If I'm dreaming, don't pinch me. Thank you so much for being here.

JUDGE JUDY SHEINDLIN, "JUDGE JUDY" PRESIDING JUDGE: It's a joy for me. Good luck and congratulations.

KELLY: Thank you very much. The number one television show in America, highest paid, hugely successful, and there is a reason for that. And it's not just your TV presence which is so compelling. It is your personal philosophies which we get to hear from you on the air. And this is something you have been railing about since you wrote the book that is actually my dianetics, "Don't Pee on My Leg and Tell Me it's Raining" which was back in 1996. You talk a lot in this book and ever since, about personal responsibility and about not accepting mediocrity as the norm. Your thoughts.

SHEINDLIN: Oh, my goodness. How much time do we have? Do we have a lot of time?

KELLY: Take all the time you need.

SHEINDLIN: Let's start with the fact that this month -- November actually, November 19, is the 150th anniversary of when Lincoln delivered the Gettysburg address.

SHEINDLIN: And you know, we all learned in school about the Gettysburg address, what it stood for, what it said and at that point, the president was commemorating a cemetery for the fallen union soldiers at Gettysburg. The last line, if I remember it correctly, is we shouldn't forget that this is a nation of the people by the people and for the people.

I want to go back to a story, Megyn. When I was a supervising judge in family court in Manhattan back in the '80s, I had a judge who didn't take the bench on time. I like to get there early. People are waiting. Citizens paid for an expensive court system just like the public pays for an expensive government. And I felt as if I was a public servant. They paid my salary. They were entitled to a day's work for a day's pay. So, court started at 9:15. I was on the bench at 9:00 ready to get going and everybody else was there waiting for me, court officers, clerks. This judge had a house in the Hamptons. And he couldn't get to work on time on Monday before 11:00. And I would say to him, judge, it's not the right thing. You left people sitting outside. He said, they can't do anything unless I'm here. And I said, but you know, you're a public servant. This public is not there to serve your needs.

Well, that's a lot of what we are seeing in government today. We are seeing mediocre people elected to substantial positions because very often substantial people don't want to run for government office anymore because of all the hassles of it. And we have mediocre people taking positions where they can affect the lives of 300 million people. I mean, whether you believe in ObamaCare or don't, that's the law right now. So, let's get moving, folks. Whatever your position is on it, that's what the public voted for at a particular time in our history. So that's what we have now. We have to work around that.

KELLY: What about that? Because you write in this book which I love so much -- "Don't Pee on My Leg and Tell Me it's Raining." You talk about how, by shifting the emphasis from individual responsibility to government responsibility, we have infantilized an entire population. We expect too much from our government.

SHEINDLIN: Absolutely right. I think that 150 years ago when Abe Lincoln delivered the Gettysburg address, everybody served in the army. Big ones, tall ones, strong ones, not so strong ones. If you had an ear infection you still served. If you could only see out of one eye, you still served. You did what you had to do in order to the take that responsibility to the next level.

Well, I think that if you have children, you have to do whatever it takes to support them. That's your job. I made children. I supported the children and brought them up, the ones that I made. I actually don't want to support your children.

KELLY: And I have been.

SHEINDLIN: And then have a television program, you know, named in your honor.

But actually, if you are responsibly parenting you have only the number of children that you can afford to take care of. And when the government in effect says to you, you know what? You have them, we'll take care of them. And when the government says, in my view -- and I know that this is going to sounds harsh and I'm going to get lots of mail, don't send me negative mail. I don't read it. I'm too old.

If you are a drug addict or an alcoholic, I actually don't think that that's the kind of disability that should be subsidized by the American public who work hard for their money, those people who are working. If you choose drugs and choose alcohol you may, let your family take care of you. But when I have cases, and I have had them for 30 years, of people who were receiving disability because they are either drug addicts, alcoholics, some have bad backs, some suffer from -- you know, I have carpal tunnel in my hands, I have lupus. I have a daughter-in-law who has lupus. Sometimes she's tired, but most of the time she gets up and does what she has to do. Sometimes it's debilitating, sometimes not.

KELLY: We'll do it for you.

SHEINDLIN: When I have a man, a perfectly capable able-bodied guy who has been going to college for seven years and getting $20,000 a year from the government, and the only thing he can do after seven years is play the guitar, I think somebody's got their hands on my pocket.

KELLY: So, to steal a line from Tommy Boy, lots of people go to college for seven years. Yes, they're called doctors.