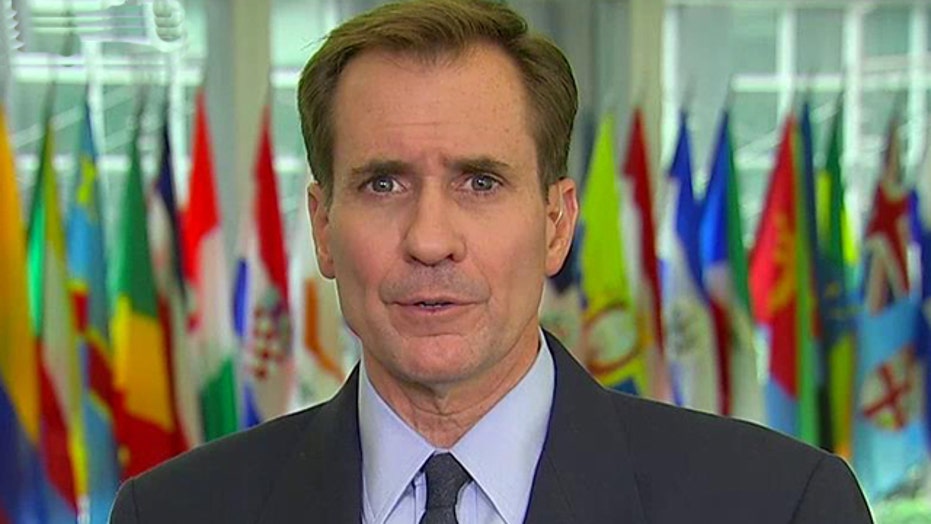 John Kirby on threat from ISIS, nuclear talks with Iran

State Department spokesman on 'Your World'

This is a rush transcript from "Your World," June 26, 2015. This copy may not be in its final form and may be updated.

NEIL CAVUTO, HOST: In the meantime, if ISIS is indeed behind today's terror attacks -- Michael said it's hard to tell -- the State Department says there's no evidence that they're coordinated at this time, but Americans are clearly worried; 33 percent say ISIS poses the biggest long- term threat to the U.S. in a new Fox poll.

To State Department spokesman John Kirby on what is being done to squash that threat.

So, Admiral, you're looking at this, seeing these things. And I'm wondering, the heightened fears Americans have no doubt because of these increasing incidents that seem to come with a -- in rapid fire, what do you make of that and what are we doing to address that?

REAR ADM. JOHN KIRBY, PENTAGON PRESS SECRETARY: Well, certainly we understand the concern, not just here at home, but around the world, about the threat that ISIL poses.

And we have been talking about this for a long time, particularly this threat of foreign fighters and people becoming self-radicalized or even inspired, and simply not coordinated, but inspired to conduct attacks like this. It's something that more than 30 countries in the coalition are now taking administrative and -- administrative and legal action to try to stem.

It's a real problem. And what we're doing, though, the fight against ISIL, broad coalition, more than 60 nations, and it's not just about military pressure in Iraq and Syria. It has got an economic development. It has got a development aspect to it. And it has a communication aspect to it.

I heard you talking earlier in the previous segment that the propaganda that ISIL puts out there, they are certainly very adept at that. We're also very agile at it, too. There's more work to be done in that regard.  But there's a wide effort across the interagency here in the United States and internationally across the coalition to try to get at this group.

CAVUTO: Well, I know the one suspected terrorist in France, he was on people's radar, certainly on French authorities' radar way back to 2006-2007, somehow, inexplicably, fell off that radar for terrorist threats and all the rest.

So, certainly, he was being watched. Do we know anything more about that or how it is -- and I don't if it happens in this country -- maybe you do -- where you're watching someone, monitoring someone, or maybe there are too many to watch and monitor and they just fall between the cracks?

KIRBY: Well, law enforcement here in the United States of course does this very well, and they're very adept at it.

I can't speak for French authorities. And this is an investigation that the French are conducting, and we want to respect that process. And I also think it's important to remember that we don't have -- and I just spoke about this a little bit earlier today. We don't have direct evidence that all of these are ISIL-related, ISIL-connected, or that they're even all coordinated in some way.

CAVUTO: Well, certainly, for the French event, there's enough to think that, and obviously the French leader used to talk about it being an outright terrorist act.

And, certainly, all the signs point to that. But I guess what I'm asking you is, is here in the United States, do you feel that our security and our intelligence has been compromised with reining in the way we go about it, taming the NSA, trying to find a better way to do this so that we're, I guess, not as intrusive or stomping on people's privacy rights? Do you think this has, ironically, made us more vulnerable?

KIRBY: I think it's noteworthy that we haven't had a major terrorist attack here in the United States since 9/11.

A lot of work and a lot of effort went into that. And it's been 13, 14 years. There's always a vulnerability, there's always a risk. And you always try to mitigate that risk. I think the way I would answer your question is, there's -- nobody in the federal government is not committed to trying to prevent that here at home, and they're not -- and nobody is not working 24/7 to try to bring that...

CAVUTO: No, I'm not saying you have us out to be killed.

I do wonder, though, in the zeal to try to get a deal with Iran scored, and Iran has always seemed to be the means and the entity through which a lot of these attacks are waged or certainly financed, why are we in such a rush to score a deal with them, when of late of course it seems like they're not as eager as we are to do it?

You got talks on the part of mullahs and the supreme commander who say that they're not too keen on allowing inspectors in or to monitor stockpiles.  They continue to say outlandish stuff about the United States and Israel.  It's been a while, but they were threatening us and harassing us in the Strait of Hormuz and in so many port of calls.

I'm just wondering, what do we get out of trying to push a deal with folks who don't seem to want to push it as much?

CAVUTO: Do you think we want it more? Because I get out of their behavior -- and I know it's all negotiating and could be posture -- that they just seem to be awful human beings to negotiate with.

KIRBY: Well, the focus is -- on this deal is on preventing them from being able to acquire nuclear weapon capability. That's the focus of this deal.

CAVUTO: But they're not allowing us to verify that. Right?

KIRBY: No. Well, again, look, I'm not going to negotiate here on TV.

CAVUTO: Feel free. You can feel free. We can settle this once and for all here.

KIRBY: There's discussions going on in the room.

And, look, we have made it very clear that without an intrusive verification regimen, we're not going to sign up to a deal. That has to be part of the final agreement.

KIRBY: They agreed in Lausanne in April that they would set the parameters that would provide the IAEA the access it needs to verify.

CAVUTO: Well, that's news to the supreme leader, because he is the big cheese, right, and he's not going to allow it?

CAVUTO: He is not tweeting. He is stating it. He's doing big gala presentations saying all this.

KIRBY: What matters to us is what is going on in that negotiating room.

CAVUTO: So, he is not doing what he is saying? He -- you -- this is all bravado? You don't think he really means any of this nonsense?

KIRBY: I can't speak for him.

I don't. I speak for Secretary Kerry. What I can say is, we have seen him do this before. And we're not going to pay attention to the public comments that are made by people on all sides here. We're going to focus on what diplomats are saying inside the negotiating room.

CAVUTO: They must concern you when he speaks like that, like, who the heck are we talking to?

KIRBY: It's certainly not helpful to the process, Neil, but it's not going to change what we're trying to get done inside the negotiating room, and the parameters that Iran has already agreed to in Lausanne in April.

CAVUTO: All right. OK. It's very good talking to you, John Kirby. Thank you very much for stopping by.

KIRBY: Glad to be here with you.