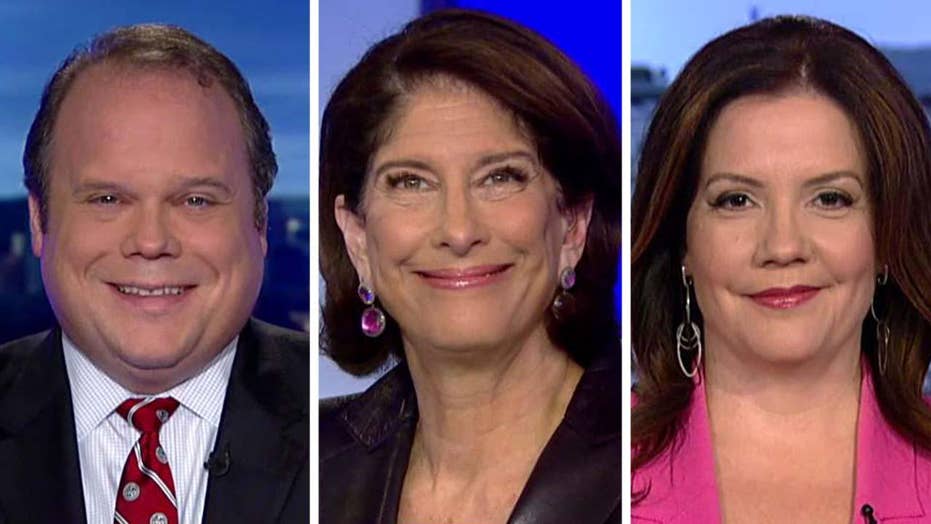 2020 Democrats battle to stand out in crowded field; reaction and analysis from the 'Special Report' All-Stars.

This is a rush transcript from "Special Report with Bret Baier," May 13, 2019. This copy may not be in its final form and may be updated.

BETO O'ROURKE, DEMOCRATIC PRESIDENTIAL CANDIDATE:  I think the most urgent crisis and the greatest capacity to affect that on day one in the White House is climate.  The shot clock is running down.  We have 10 years, and that's it.

SEN. ELIZABETH WARREN, DEMOCRATIC PRESIDENTIAL CANDIDATE:  The climate crisis that we are in right now, it's 25 years of corruption in Washington.

JOE BIDEN, DEMOCRATIC PRESIDENTIAL CANDIDATE:  We do need to finish this green revolution in a way that is rationally, and we can do it, afford it, and get it done now.

BRET BAIER, ANCHOR:  Democrats on the issue of climate, a lot of them coming out, saying there is no middle ground, and it is a big issue, obviously in the Democratic primary.  As you take a look at the early stage and the Real Clear Politics average of polls in those states, Joe Biden is still running strong, and stronger in a place like South Carolina, for example, where new polls suggests he has a massive lead down there.  A heavily African- American caucus always plays in South Carolina as well.

Meantime, former defense secretary who worked alongside Joe Biden, Bob Gates, was asked about something he wrote in his book.  He said Biden is impossible not to like.  He doesn't hide from what he says.  Still, I think he has been wrong on nearly every major foreign policy and national security issue over the past four decades.  And he was asked on CBS this weekend about that statement.

BOB GATES, FORMER DEFENSE SECRETARY:  He and I agreed on some key issues in the Obama administration.  We disagreed significantly on Afghanistan and some other issues.  I think that the vice president had some issues with the military.  So how he would get along with the senior military and what that relationship would be, I just, I think it would depend on the personalities of the time.

BAIER:  Margaret Brennan asked him, would he make a good president?  It took him four seconds to come to "I don't know, I don't know."

With that, let's bring in the panel: Chris Stirewalt, politics editor here at Fox News; Mara Liasson, national political correspondent for National Public Radio, and Mollie Hemingway, senior editor at The Federalist.
Mara, it seems like if you just went by the polls, and we are nine months from one person voting, it seems like he has a commanding lead.

MARA LIASSON, NATIONAL PUBLIC RADIO: Yes, but the history of Democrats who are front runners at this time in the process are that they don't become the nominee.  That has been the historical record.

That being said, I would say that many Democrats are surprised at this.  A lot of them thought that Biden was a disaster waiting to happen, but they have been pleasantly surprised by his ability to raise money, his relative discipline on the trail.  But all of that being said, Biden has not really been challenged yet.  He hasn't been on a debate stage with these other candidates yet.  And yes, right now he is doing better than I would say most every single Democrat I talked to thought he would do.  Whether it lasts, I don't know.

CHRIS STIREWALT, FOX NEWS POLITICAL EDITOR:  I think the Democrats writ large, broadly misinterpreted who was in their party.  I think Democrats did not understand that Twitter is not real life, and that the Alyssa Milano online activist set does not constitute as a majority of the Democratic Party.

The Democratic Party is about 60 percent female, it's more than 40 percent nonwhite voters.  Those votes actually tend to be more moderate, more conservative than white, liberal voters who live in big cities with college degrees.  So guess what, if you have a bunch of candidates who are running as far left and as hard left as they can, and then you have Joe Biden comes along and says I can probably beat Donald Trump and I'm a pretty normal guy, that is going to sound good.

BAIER:  Yet, on the issue of climate change, the party as to the left.  And if you say anything that is even relatively in the middle, people jump. Reuters had a report, "Democratic presidential hopeful Joe Biden is crafting a climate change policy he hopes will appeal to both environmentalists and the blue-collar voters who elected Donald Trump according to two sources, carving out a middle ground approach that will likely face heavy resistance from green activists."  Bernie Sanders tweeted right away, "There is no middle ground when it comes to climate policy.  If we don't commit to fully transforming our energy system away from fossil fuels, we will doom future generations.  Fighting climate change must to be our priority, whether fossil fuel billionaires like it or not."  And he was not alone and jumping on that statement.

MOLLIE HEMINGWAY, THE FEDERALIST:  Bernie Sanders said that there is no middle ground, you had other candidates saying that as well, and there is kind of a truth to that.  People who care a lot about this issue think it calls for a radical overhaul of the economy, and doing minor regulatory issues is not going to satisfy them.

At the same time, those minor regulatory issues are precisely why Republicans have a huge advantage in general elections, because people in general tend to view this much differently than the Democratic Party, which favors government action to deal with global warming, and the average voter is not going to be as -- is not going to find that as appealing.  This is a great example of how the Republican -- the Democratic Party base can cause problems for the eventual nominee.

BAIER:  To that point today, the Biden campaign, we should point out, set out a statement saying that Reuters got it wrong. That "Biden has called climate change an existential threat, and we look forward to discussing his plan to address it in a meaningful and lasting way in coming weeks."  That suggests don't touch the hot iron.

LIASSON:  Right, except what you heard him say in the clip you played earlier, he said we have to have a green revolution, so that is a good lefty word, revolution, but he said in a way that is rational, we can do it, and get it done now, meaning something that can pass.  Is he going to have a $4 trillion Green New Deal jobs program, which is pretty much what the Green New Deal is?  No.  Is he going to have some kind of carbon tax rebate, nuclear power, et cetera?  We've got to hear the details from him.

BAIER:  The Montana governor, Steve Bullock, is going to get into this race this week.  We are going to get above I think it's 23, 24.  Here's the question, we're going to run back the tape when we get to January.

LIASSON:  Make it to Iowa?

STIREWALT:  Make it to Iowa?

LIASSON:  I thought you were going to say --

LIASSON:  Can I say coming out of Iowa there are only five?

BAIER:  What have you got, Mollie?

HEMINGWAY:  I was going to go with eight.

STIREWALT:  If you say one it is like "The Price is Right."