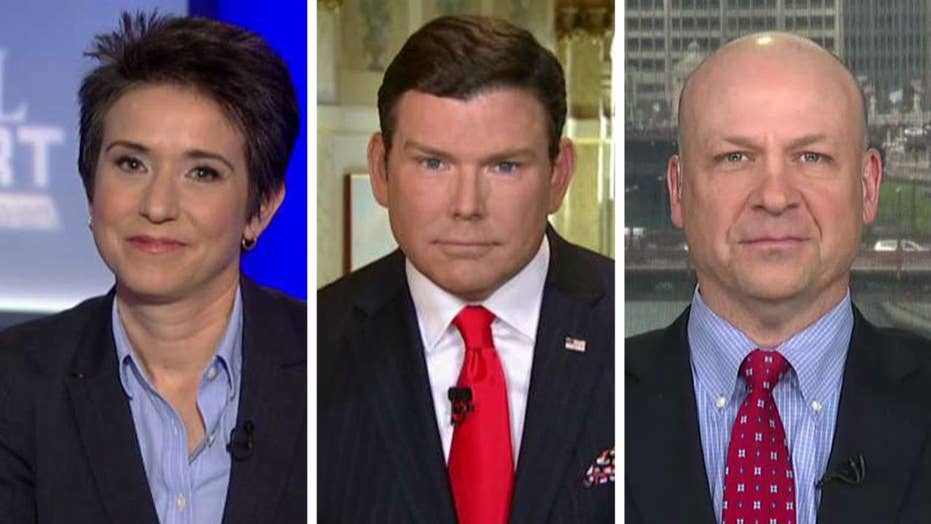 This is a rush transcript from "Special Report with Bret Baier," May 8, 2019. This copy may not be in its final form and may be updated.

REP. JIM JORDAN, R-OHIO: I think the Democrats are nervous that Bill Barr is going to get to the bottom of how this whole Trump/Russia investigation started.

BRET BAIER, ANCHOR: The House Judiciary Committee voting to say that the Attorney General is in contempt of Congress -- still has to go through the House overall. But the House Judiciary along party lines doing that -- the DOJ responding to that with a statement -- pretty lengthy.

"The accommodation process between coequal branches of government is supposed to be a two-way street. Unfortunately rather than allowing negotiations to continue, Chairman Nadler short-circuited these efforts by proceeding with a politically motivated and unnecessary contempt vote which he refused to postpone to allow additional time to explore discussion and compromise. It is deeply disappointing that elected representatives of the American people have chosen to engage in such inappropriate political theatrics. Regrettably Chairman Adler's actions have prematurely terminated the accommodation process and forced the President to assert executive privilege to preserve the status quo. No one, including the Chairman Nadler and his committee will force the Department of Justice to break the law."

Well, let's bring in our panel: In Washington, Amy Walter, national editor for the Cook Political Report; and Tom Bevan, RealClearPolitics co-founder and president, joins us from Chicago.

Amy -- you know, contempt in the big picture. You know, where it goes, what it means probably not a lot if you look at Eric Holder and others.  But the President is saying that executive privilege covers all of the Mueller report. Really the Trump card -- not to have a pun in there.

AMY WALTER, COOK POLITICAL REPORT: Yes. It's a good pun though. But I do think that this issue is going to be probably punted back into the court where it may stay for a good, long time. It is really unclear as to how long it is going to be caught up in the court of law.

I do think what will be interesting to see is how voters perceive it. And right now, where we are with voters, at least the way that they look at the Mueller report writ large, will be an issue of impeachment writ is they seem to have come to three conflicting conclusions and are holding them all in their brain at the same time.

And even among Democrats, when you ask Democrats what do you want to see happen? 30 percent of them say it impeach immediately. The overwhelming majority said let's keep investigating.

TOM BEVAN, REAL CLEAR POLITICS: Yes. And to Amy's point about the polls despite all the hysteria and the frenzy surrounding the Mueller report, those numbers have not moved. And I don't expect that anything that we're going on in Congress right now is going to make the poll numbers move in any significant way either.

I mean I do think Democrats are kind of trying to have impeachment without impeachment. Jerry Nadler was asked in this press conference, why not just move ahead with impeachment? And he said well, that might not be the right remedy for this point in time. Well, they are trying basically have it both ways.

So they are really in this battle over -- yes and they didn't even go read the report. So this is really sort of much ado on behalf in my opinion, the Democrats wanting to create some conflict here surrounding the President and the attorney general.

BAIER: All right. And obviously, the other day the Speaker said that the President is trying to goad Democrats into impeaching him which is an interesting take from Speaker Pelosi -- we talked about that last night.

The other story and I want a quick response on this, is the "New York Times" story about the Trump taxes back in the 80s or early 90s, decades in the red, Trump tax figures show over 1 billion in business losses. Tom -- big deal, not a big deal? What do you think?

BEVAN: Not a big deal I mean everybody knew about Donald Trump's troubles with business and bankruptcy and all of that. That was litigated. I mean the numbers are eye-popping obviously and when you see that but you know, sort of big picture broadly speaking, I don't think -- again, this is not much that people didn't already know about Donald Trump and his business track.

BAIER: Crowd is getting here.

COOKS: You did a great job. And going to the broader point here. So much of this is already sort of baked in the cake opinions about this President haven't moved. And in fact, there was a new study out this week that showed that 85 percent of voters have not changed their opinions on this president since December of 2016.

There's obviously been a whole lot of material that they have gotten. A whole bunch of stuff that has happened between December 2016 and today. 85 percent of Americans have not change their opinions of the President.

BAIER: All right. I have ten seconds each. What does Amy Klobuchar have to do tonight? And go ahead.

WALTER: I think what she is going to have to prove --

WALTER: I think what she's going to have to prove is that she belongs in that top tier of candidates in her ability to show that she cannot just be a moderate but to win over Democrats.

BEVAN: Yes. No, look this is a big stage for her. This is a chance for her to really connect and get some -- the attention that she hasn't gotten to this point. And she needs to capitalize on it because obviously Biden has taken some of the steam out of her sails.