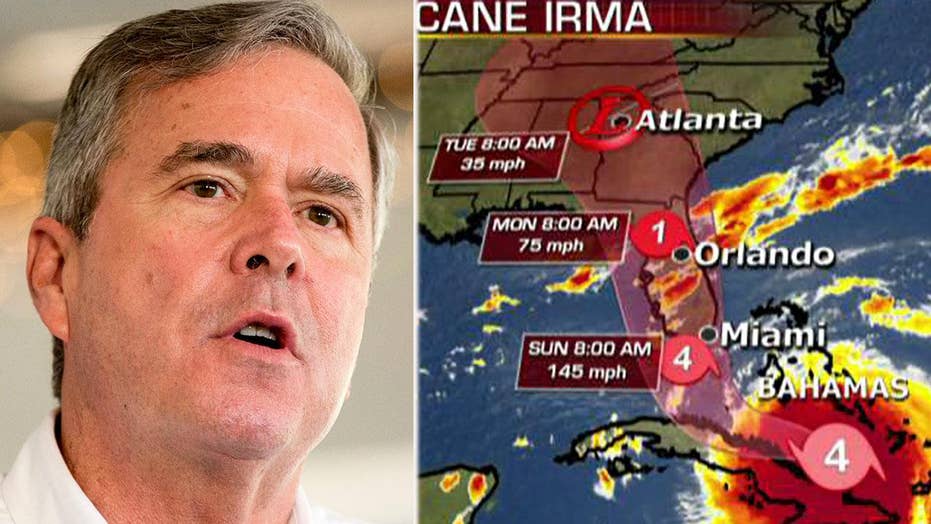 Jeb Bush on how Floridians are meeting the challenge of Irma

This is a rush transcript from "Your World," September 8, 2017. This copy may not be in its final form and may be updated.

NEIL CAVUTO, "YOUR WORLD" HOST: My next guest certainly no stranger to hurricanes. Many argue he set the standards for how governors reply to them and deal with them.

Governor, very good to have you, sir. Thank you very much.

JEB BUSH, R-FORMER FLORIDA GOVERNOR: Thank you, Neil. Good to talk to you.

You have been through this drill many, many times. There does seem to be coordination among all important agencies right up to the governor, as was the case in Texas. But, you know, some people sort of get cavalier in their attitude.

We're hearing a lot of Floridians who are going to ride out the storm and do all of that. As governor, how do you handle that sort of thing?

BUSH: Well, you have got to give them all the information, as Rick Scott has done, make sure that they're totally informed.

But ultimately people have to accept personal responsibility. I saw on your channel a guy who is living on a sailboat in the Intracoastal and he's going to ride it out.

BUSH: That guy is going for the Darwin Award. You can't legislate or mandate someone that is going to be that stupid to get out.

But, by and large, South Floridians particularly have heeded the advice of local officials and the governor. Not everybody is leaving, because we have the strongest building code in the country. People in the low-lying areas that have been mandated to leave are leaving.

But a lot of people will stay here and will recover. I'm pretty proud of how Floridians have responded to this great challenge.

CAVUTO: I did one -- I was chatting with that guy on Fox Business, Governor.

And he said he and his wife were going to keep the boat close to the pier. If things get really dicey, they will go into a structure. And I said, you know, the water is going to rise a lot. And I'm not necessarily very good at math in all its forms, but it was going to rise a lot higher than the pier itself. So obviously he would be on the street.

But what do you do in that event?

But it was more powerful in the winds, apparently. And the storm surge moved the sailboats by miles.

CAVUTO: I will bet.

BUSH: This guy could wake up in the Everglades. It's just -- it's ridiculous.

CAVUTO: Yes, but it is what it is, I guess to your point.

Governor, I was thinking as well, after '92, the last big storm that was of consequence going in as a Category 5, Andrew, there was a lot of building reinforcement.

I know, under your two-term stewardship, you wanted -- you can't make buildings and structures hurricane-proof, but at least more hurricane- resistant. You led that effort.

Florida is in better physical shape for something like this. But a Category 4 or 5 storm, that is a whole 'nother beast, isn't it?

But, you know, you don't -- you have got to realize that these -- there's going to be tornadic activity, the storm surge. You can't create a building code for that. People that are in the low-lying areas along the coast that have been told to evacuate, the great majority have.

And they're heeding the advice of the governor and the mayor. And they're doing the right thing. The recovery part of this is going to be a huge challenge, getting power back on, getting people back to work, making sure the schools open. All of these things are going to be the next challenge for the political leadership of the state.

CAVUTO: Governor, we talk about filling shelters and dealing with all of that.

And, of course, it's, you know, dicey when you tell people that evacuations are in order, but a lot of people looking at the lines of cars outside some choke points along either the Florida Turnpike, or about 95, the major arteries I guess going from south to north in this case if you're leaving the state or trying to, how do you prevent what is happening in some of these locales now, where you do have some traffic jams and you do have a lot of people saying, well, now it's too late even if I wanted to?

BUSH: Neil, you cannot evacuate five people in Southeast Florida and another 1.5 million in Southwest Florida and expect a good result.

And as the evacuation orders cascade north, our state is not capable of that. That's why over the last 20 years, with an enhanced building code, we have added thousands and thousands of security shelter space.

And a lot of people understand how they need to protect their home and protect their families and they shelter in place. But these pictures of traffic, you know, if you remember Hurricane Ike in Texas, people were stuck on the road and died.

BUSH: If you haven't evacuated, there's going to be a point in time where the mayor of Dade County and Broward County and the governor are going to say you have to shelter in place. And that's coming pretty soon.

I think the FEMA has been very responsive. I appreciate the fact that Congress appropriated the money that is necessary to keep this going forward.

CAVUTO: Did you like the way they appropriated it, Governor, tying it to the debt ceiling?

And I would love to see the $19 trillion of debt be dealt with. And doing that has to be a priority. But, thankfully, given this storm, we didn't screw that one up at least. The people in Texas needed that help. And people in Florida are going to need help as well.

And I don't think that that should have been added into the political drama of D.C.

CAVUTO: A lot of folks were surprised because they said it would have gotten the clear and been an up-or-down vote and would have been approved regardless of tying it or trying to tie it to the debt ceiling thing, and that the president, moving as he did to work with Chuck Schumer and Nancy Pelosi to coordinate that, and not Republicans, sort of sideswiped them.

Do you think he did?

BUSH: Well, look, Republicans have always had conditions for the debt ceiling in every case over the last 10 years. And it seems now, with this president, no conditions have been added to it.

But that's for a discussion of another day. Ultimately, the way to solve our debt problems is to deal with higher economic growth and entitlements. But, today, I think the focus needs to be on how can people be kept safe for this massive storm heading our way?

But I'm going to indulge that politics one more time. You're free to ignore me, Governor.

BUSH: You can't help yourself, can you?

But I was curious, Governor, about the logic for it behind the president's thinking and some of his supporters was to say, well, this clears the decks for this tax cut, whenever it comes to fruition, and getting it passed.

But that would be time-wasting as well, because it would have to all be done by December 8, right?

BUSH: It's essential that we get the tax cut done for high, sustained economic growth.

I think a lot of the divisions in our country would go away if people felt like their future was going to be bright. And one way to make that happen is to put more money in their pockets and to have high economic activity, so people can get better jobs and higher wages.

So, it's really important as a conservative and as a Republican. If they can't deliver that, you know, then I think people are going to abandon the possibility of Republicans being capable of leading.

CAVUTO: Do you think that everyone should get a tax cut, by the way, Governor?

There's talk that in this plan, maybe the upper income will not, or if they get one, it will be small and it would be offset potentially by a limit in their deductions, that sort of thing. How do you feel about that?

BUSH: Well, I think the code ought to be simpler, and not be used for economic or social policy, in the sense that you have carve-outs and credits and deductions.

The simpler the code, the more transparent it is, the more clarity you will have in investment. And if wealthy people pay the significant majority of the tax cut -- of taxes, it's impossible to imagine how they would not benefit from some part of the package.

CAVUTO: You have the lower corporate rate presumably would benefit them. We will see.

Back to the hurricanes and what has been happening, it's united all the former presidents, your brother and your dad included, to make a pitch for helping out, help presumably those in Texas and, by extension, in Florida, whatever happens.

BUSH: It's a noble tradition in our country that former presidents put aside whatever differences they might have had to unite.

My dad and President Clinton did that with the tsunami relief efforts. And certainly in Katrina, they did the same. I think it's a great thing and I know that the people of Florida are appreciative, because they will generate a lot of money that can be put to use in the recovery, which is a lot harder than people realize.

CAVUTO: We could be looking at some of these other storms, Jose and Katia, I guess, behind that. They're lining up like planes at La Guardia here.

It could be potentially the most expensive hurricane season on record. Where do we get the money to address that, Governor?

BUSH: Well, this should be the first priority, for sure.

The moneys will come from the taxpayers. They will also come from philanthropy, and local and state governments will put in their portion. We had eight hurricanes and four tropical storms in 16 months when I was governor.

BUSH: And Florida prevailed. It recovered quickly and became a net contributor to the country.

So, we always look at these things kind of in a doomsday scenario as the storm approaches, but I think we can figure this out. Americans do better in this kind of situation than we do just normal day-to-day activities. People are really putting aside of the division that is quite dangerous for our country to help their fellow friends and neighbors. And it's very encouraging.

CAVUTO: Yes. It is possible. It can be done.

Governor, thank you so much for taking the time. I do appreciate it, Governor Jeb Bush.