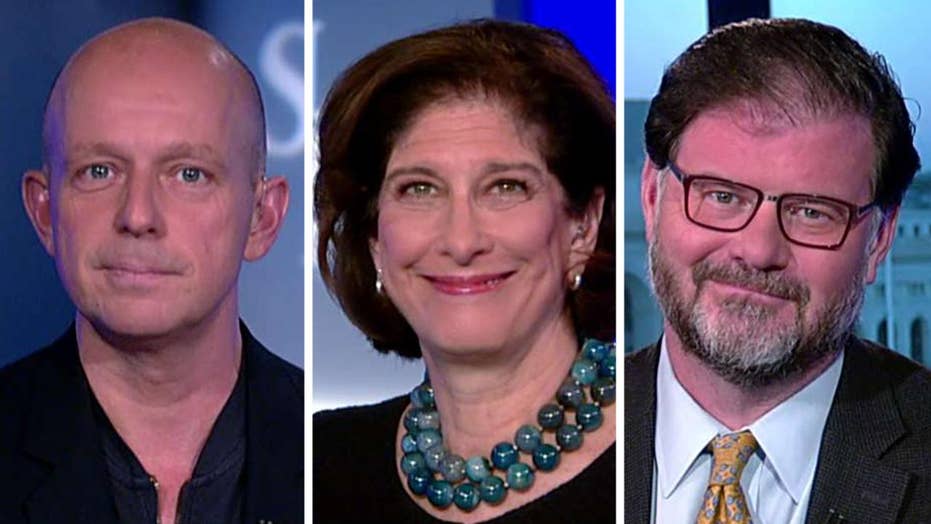 This is a rush transcript from "Special Report with Bret Baier," April 17, 2018. This copy may not be in its final form and may be updated.

Japan and ourselves are locked and we are very unified on the subject of North Korea. Conversations will we'll be having meetings with Kim Jong-un very soon. It will be -- that will be taking place probably in early June or a little before that, assuming things go well.

BRET BAIER, ANCHOR: President Trump in Mar-a-Lago meeting with Japanese Prime Minister Shinzo Abe. They do have a very close relationship. The president going to Japan. He was one of the first leaders, if the first leader to congratulate President Trump after his election victory. But there is some shaky questions from a Japanese point of view about what is happening with North Korea and also on the issue of trade and these tariffs and what's next.

Let's bring in our panel: Steve Hilton is a former adviser to British Prime Minister David Cameron and the host of "The Next Revolution" here on Fox News Channel; Mara Liasson, national political correspondent for National Public Radio, and Jonah Goldberg, senior editor at National Review.

Mara, when you listen to this, we are obviously trying to get something, but it is also a little bit of hand holding for Japan concerned about what's going to happen with this North Korean meeting.

BAIER: But in part, they are talking about a number of things, including possibly opening up, Steve, TPP, Trans-Pacific Partnership.

STEVE HILTON, FOX NEWS HOST: Yes. I think that the general position that the president seems to have and I think increasingly his team is skepticism about these multilateral trade deals. And I share that. And for the reason of democratic accountability. When you do these big deals, the people who end up implementing them, making the rules, invigilating them, are unaccountable international bureaucrats. I think that's bad, that's a bad outcome. And so, generally, I think skepticism is in order.

But if they can get back into TPP and bring back some of the accountability, that is strategically good because the people who really hate that are the Chinese regime. And that's a really long term strategic threat, which is China and its stated ambition to dominate the world militarily and economically. And so anything that strengthens the forces against the Chinese regime I think is good.

BAIER: Because as the U.S. pulled out of the TPP China moved in to some of those relationships and kind of closed the door almost. So, let me play this sound bite from Larry Kudlow on the possibility that this gets back in the mix.

LARRY KUDLOW, NATIONAL ECONOMIC COUNCIL DIRECTOR: It's possible if and only if there are major improvements to the existing TPP. That's the president's key point. He is not a big fan of these multilateral agreements. He would rather go country to country. So-called bilateral like we're going to talk with Japan tomorrow, or today and tomorrow. So we'll see about this. He wants to take another look at it.

JONAH GOLDBERG, NATIONAL REVIEW: Yes, I mean one of the things that kind of got lost in the campaign in 2016 both in the primaries and in the general is the fact that the TPP was designed to constrain China. And by pulling out of it without any concessions or trade, we actually gave this enormous geopolitical gift to China. And if the White House wanted more protectionism, more tariffs on China, we could have traded pulling out of TPP for something glorious. But we didn't do that.

BAIER: That's the contingency. You've got to get something.

GOLDBERG: You have to get something out of it. But the second you do that with one of these very complicated multilateral things, you have to renegotiate because it is this spiderweb of connections.

BAIER: It's like pulling a thread out of a sweater.

LIASSON: Except that Japan and South Korea really want us back in. And when they formed the mini TPP, the TPP minus the U.S., they merely suspended a lot of the things we wanted. They didn't completely eliminate them. So there is still a possibility. If Trump finally wakes up and decides, wow, I want leverage against China, here is this thing that could give me that, I think that they could get back in.

BAIER: I want to play this other sound bite about the upcoming meeting with Kim Jong-un. This is again the president in Mar-a-Lago.

BAIER: You know, and, Steve, I was over in Japan. I interviewed Shinzo Abe. They're concerned that their issues are talked about, the people have been abducted and held in North Korea. The concern about, as Mara mentioned, midrange missiles. Do they have a right to be concerned about this sit-down one-on-one?

HILTON: Yes, but they should be pleased that it's happening because it's in everyone's interest for the situation to come back from the precipice that it seemed to be on. And so the fact that people are talking, the fact that these already between the north and south, the fact that these talks are happening, that's all good news for Japan, for the region, and for the whole world.

And this meeting today is very helpful because it will put at the front of the president's mind those concerns of Japan. And they will really be there present when he is thinking about the strategy for the talks and then the talks themselves.

BAIER: Is there any doubt that the president's unpredictability in how he talks about this has forced where we are today?

GOLDBERG: No. I think he definitely gets considerable credit for forcing at the very minimum these rhetorical concessions, which means something. For North Korea to talk about ending the war, that means something, that's significant. To talk about denuclearization, that is significant. I am still deeply skeptical, not as a criticism of Donald Trump but as an observation about the North Koreans, they have considered being a nuclear power the central focus of their foreign policy and they have lied their way to get to it for two decades. And the idea they are going to give that up suddenly without some assurances that they get -- I don't think we could give, I am just very skeptical.