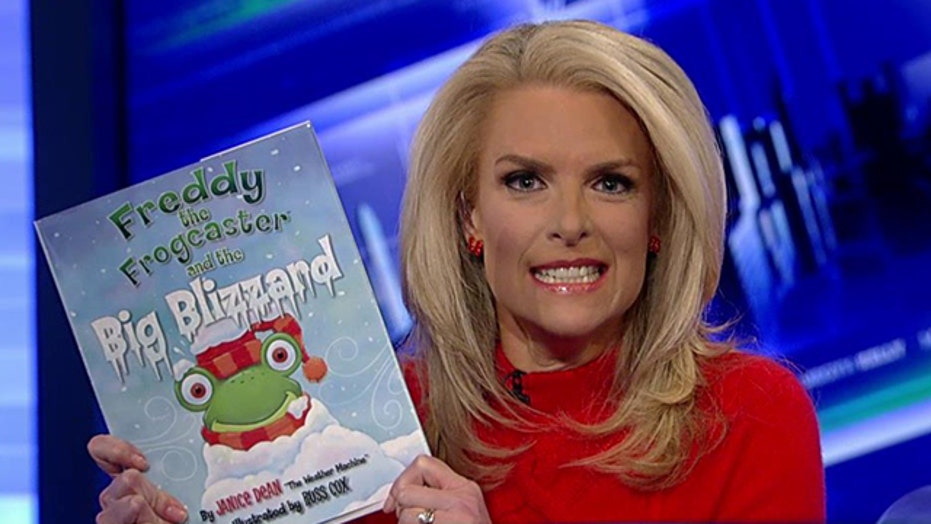 Janice Dean on 'Freddy the Frogcaster and the Big Blizzard'

MEGYN KELLY, HOST: Well, just when it seems like bad news and horrific acts surround us, it's important to remember that good people are always working harder than the bad, to shine a little light into the lives of others. My colleague and friend Janice Dean is one of those people. She's an amazing woman whose books not only teaches children about the weather but also promote literacy. And she has a new one. It is called Freddy the Frogcaster and the Big Blizzard. Here it is. The Blizzard.

KELLY: The first Freddy was a huge hit.

KELLY: And you know what the people need to know is this is going to become -- I mean, iconic -- I predict there is going to be a TV series. Freddy is going to be so huge. You might as well get your kids knowing about him now. Because, not only do they learn about weather, that's all good we want our kids to learn, but there's a beautiful story in there. It's got morals.

DEAN: You know, they say you can't judge a book by its cover, but this one you can.

KELLY: Extreme close-up. No one likes that, back up.

DEAN: OK. If you're up on Freddy, then that's fine, just don't go the wrinkles here. But, you know, it is a beautiful book. Russ Cox is my illustrator. And it's got a great story line. Freddy the Frogcaster has been frog casting the weather since he was a tadpole. He has his friends Sally Croaker and Polly Wagon of the Frog News Network that he helps and this is a big blizzard that's rolling through. But not only it is a beautiful book, it's a great story line. And it's educational. So, you can teach your kids something.

KELLY: And kids are fascinated by the weather.

DEAN: They are. Well, even young Yates, a couple of months ago you texted me to say, you know, Yates wants to learn about hurricanes. That's the next book, by the way, the next one. And, you know, they have a natural appreciation of what is going on outside.

DEAN: Matthew, my Matthew, when he was 3 years old took a wash cloth, he squeezed it out, the water came out and said, momma, that's a cloud and that's rain. And I know you know he's brilliant, but he took it to the next level. So, you can assist, and you know what the other thing is, you know, the news has been so bad, this is a way to connect with your kids. I think we need more of that.

KELLY: But plus the story itself has a moral. Each of these books has-- they have, I don't want to say villain, but they have somebody to root for and somebody to root against. And I'm just going to say, you know, I have it on good authority, I can't say it, you know, as a matter of fact, but Sally Croaker may once have been named Sal Croaker in an early version of the book.

DEAN: Megyn read an early version, just like she read her husband's does...

KELLY: But, you know, then the lawyer stepped in.

KELLY: He would never sue, being the Weather Machine.

DEAN: So, we changed it to Sally Croaker, and all worked well and he loves...

KELLY: All right. Freddy the Frogcaster, A Big Blizzard, you can get this just in time for winter. Don't miss it.