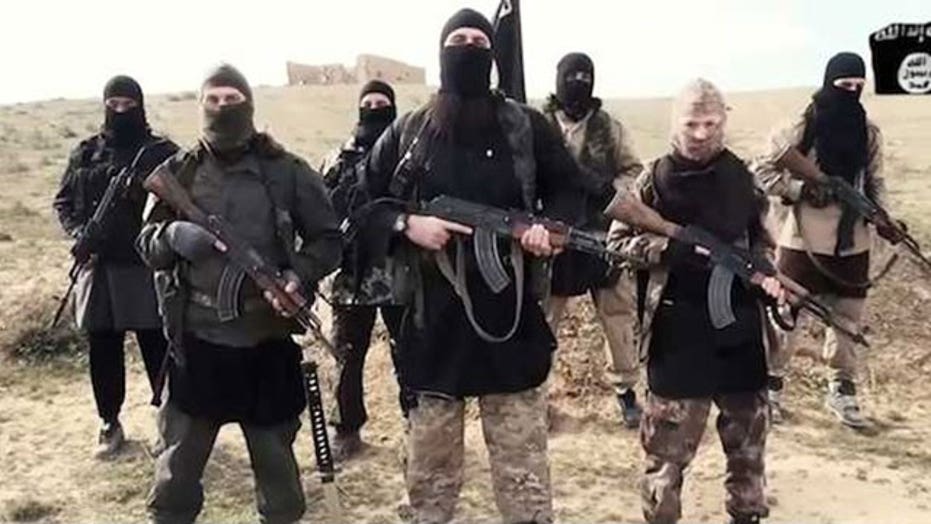 INGRAHAM: One small note about our previous segment, it is not clear whether or not Bill Clinton spoke at that Beijing event. However, he did go on to give two very high-paid speeches in China while his wife was secretary of state, both combined -- $1.3 million.

Let's move on, in the "Unresolved Problem" segment tonight, ISIS in America. A new FBI report says that ISIS is connecting with hundreds perhaps thousands of people right here inside the United States. And that number is likely growing.

LORETTA LYNCH, U.S. ATTORNEY GENERAL: We've seen social media being used in a number of cases and it really is an expansion of how the Internet has been used frankly for several years now, both in recruitment and radicalization of young people to join terrorist groups.

INGRAHAM: But the details released by FBI director James Comey are even more unnerving.

CATHERINE HERRIDGE, FOX NEWS INTELLIGENCE CORRESPONDENT: Comey told reporters that there has been a dramatic change in the way terrorists are recruited. What they see is guys getting on the web and connecting through social media with ISIS and then ISIS redirects them to encrypted communications. They go dark and that leaves the FBI effectively blind to their activities.

INGRAHAM: Now with the threat increasing, should the government start re-thinking who we let immigrate into the United States from Muslim nations? Joining us now with reaction is Ryan Mauro, national security analyst at the Clarion Project; along with Nomiki Konst who's executive director of The Accountability Project.

Let's start with you, Ryan, I think most Americans would be frankly shocked if they knew that between 1992 and 2012, 1.7 million Muslims entered the United States legally. And even after 9/11, since 2008 -- about 100,000 a year have come to the United States. Now overwhelmingly, the people come here to live peacefully and so forth.

But knowing what problems the FBI is having now, tracking people that go dark. Is this really the time to continue this massive level of illegal immigration into the country from these troubled areas -- these Muslim countries?

RYAN MAURO, CLARION PROJECT: I think what we need to focus on is the screening process and a policy on how you handle those that come here and aren't yet citizens but are radical in nature because there has been many cases where you have radical clerics coming from overseas that even go on speaking tours across the country.

INGRAHAM: Yes. And not just that though, we have Americans who are being recruited and radicalized. And Nomiki, you could chime in on this, again, we have an enormous number of people coming into this country, illegally we know across the southern border which is another set of problems and apparently that surge is building again.

But now legally, isn't it time to call into question these immigration policies when we do not know how to track people who are legally here because they're going dark?

We shouldn't ban an entire group of individuals from coming over legally or illegally into the borders because there are few radicals that are bastardizing their religion and their culture.

KONST: I mean you can look to the Irish who --

KONST: But what I'm saying is that --

INGRAHAM: That's such a ridiculous argument. You've got to be better than. Don't come with that argument.

KONST: There are terrorists within other cultures.

INGRAHAM: Do we really want to go through the numbers of who's committing the terror around the world?

KONST: That is not who we are.

INGRAHAM: You know who we are? We're -- hold on a second, we're a country that desperately does not want to be overwhelmed by radical Islamists who come into this country, legally -- whether it's the Tsarnaev brothers coming in through -- one of them coming in through a phony petition for refugee status.

We have big problems with fraud and that entire asylum and refugee status. We have -- apparently more than 1,000 -- 2,000 people who will be re-settled I believe in Idaho. We have a million or so Syrians that are going to be resettled around the globe. We have a lot of issues on our hands terror concerns right now.

And Ryan, I think again when you look at the enormity of this problem, tracking American citizens and illegal immigrants who are already here, staying ahead of that radicalization problem. Continuing this -- I mean, 1.7 million Muslims since '92 -- who voted for that?

MAURO: I mean you should only let in as many people as you can screen and allow safely to come in and the position that you're advocating is out of an admirable care for immigrants, but immigrants that come to the states are also threatened by those that come here with anti-American views. And so that's why --

KONST: -- which are small groups of individuals.

MAURO: But there isn't a process in place for that.

KONST: And we should -- we should improve our immigration program. This is something that Democrats are advocating and we're trying to come to some bipartisan agreement right now. It's having -- overhauling our immigration system. But on one aside we should be finding where these people -- you know on our land are already.

INGRAHAM: You know, what I really am tired of, when we as law abiding Americans are always told you need to do this, you need to take hundreds of thousands of people from Muslim countries when we've lost a lot of men and a lot of women and have a lot horrible, horrible things happened to American families because we've deployed our men and women overseas for other country's borders and other country's freedoms, only to have people say we have a right to come into your -- no one has the right to come into America.

That is for our country, our American workers and their wages and what we actually need and require with 2.75 million Muslims in the country, they're probably closer to 3 million now, do we need to bring in more Muslims at this time?

KONST: This isn't a question of whether or not we need to bring in more Muslims or not. This is a question of how do we attack these terrorists --

INGRAHAM: They are the overwhelming percentage, unfortunately, of radicalized Muslims -- not all Muslims -- are terrorist.

KONST: So why don't we look at this from a terrorism perspective rather than immigration perspective --

INGRAHAM: Right. Because unfortunately they're the most -- they account for the most terrorists. That's just a lot

MAURO: Until you have a process that does account for the fact that there's a radical Islamic ideology -- yes.

INGRAHAM: Ryan, Nomiki -- thank you so much. Good topic.