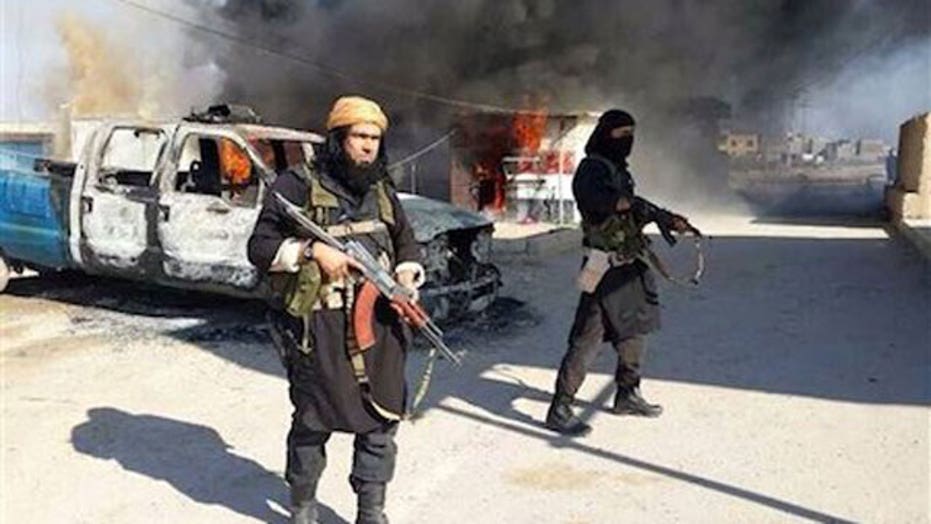 O'REILLY: "Impact Segment tonight", over the weekend, while America was focused on the aftermath of the Baltimore riots, ISIS terrorists attacked Iraq's largest oil refinery. Also they slaughtered 300 captives last Friday -- human beings killed. Also foreign terrorists from around the world continue to pour into Iraq and Syria to sign up with ISIS.

With us now with an update on the situation, Fox News strategic analyst, Lt. Col. Ralph Peters -- his brand new book, "Valley of the Shadow" is out today.

LT. COL. RALPH PETERS, FOX NEWS STRATEGIC ANALYST: You are absolutely right. The Obama administration has ignored this problem so long that a minor problem has become a global problem. Bill, we keep hearing from the administration, and even from the political side of the Pentagon that ISIS is being rolled back. We have turned them back. They are on the verge of defeat.

Instead ISIS, Islamic state, the caliphate keeps expanding. Even as you and I are speaking here, there's a battle going for Iraq's largest oil refinery at Baiji. There was just an attack in Damascus. Islamic state has spread to Pakistan and Afghanistan. Some even claim they were active in Texas, although I would not claim that.

O'REILLY: Well, the ISIS people themselves did. They took credit for the attack.

O'REILLY: And you know, they can say whatever they want on social media. The fact remains that there's still after all this time, no strategy that nobody on the ground in Syria, which is where their central headquarters is, in Iraq they come in and out, this is a big war in the country. We lost total control over that. And as you pointed out, North Africa, here they come -- all over the place. And in Afghanistan -- I mean. And there's President Obama, kind of looking around. And I said from the very beginning that you have to the confront it.

PETERS: And you have Islamic state, you have al Qaeda back and their affiliate Jabbat al Nusra. We have Boko Haram, the Korasan --

O'REILLY: Yes, all this stuff.

PETERS: These guys were on the ropes when Bush left office, no way around it. You can blame Bush, you can blame -- the apocalypse but this has happened on Obama's watch.

PETERS: We are playing defensive ball and you can't win that war.

O'REILLY: Where is the 60-nation coalition that signed up to fight ISIS? Where are they?

PETERS: Well, actually some of them are there. The Saudis relative to their capacity are actually doing more than we are.

O'REILLY: Because they're trying to knock that terrorist --

PETERS: And they're attacking -- but certainly --

I am glad for the drones but the drones are a tiny finger in a big dyke.

O'REILLY: But there's no 60-nation coordination.

PETERS: No, there isn't, of course not.

PETERS: Ok. But let me get on this. It's not just Obama, it is the media, the left, and what the view of the world they have inflicted on the American people. We are told to agonize, to agonize about two accidental civilian casualties caused by drone strikes. Within a week, the Islamic state had slaughtered between 200 or 300 Yazidis. We face enemies who glory, who delighting in (inaudible) killing.

O'REILLY: But we're supposed to be morally a better country, that's why. We're held to this high standard.

PETERS: Well, maybe Rome in the 5th century when it was coming apart was morally better than the barbarians because the barbarians won. When you fight monsters in human form such as these creatures, Islamic state , al Qaeda, et cetera you better be willing to -- you use the word neutralize on, forget it, you kill them.

O'REILLY: Well, that's what I meant.

PETERS: Say it, say it. Kill them.

O'REILLY: Well, I said remove them from the planet.

O'REILLY: Remove them from the planet -- I think everybody understood where I stand on that.

When you write a book like "Valley of the Shadow", it's a civil War battle. People read it for entertainment, they, you know, you want to learn about history, I do that in my books. Although my books are nonfiction, you're fiction. But the book is true about what happened in the battle that you're talking about.

O'REILLY: Right. Does it have any relevance to today other than just entertainment value?

PETERS: It has a lot of relevance. It's about the fighting in late 1964 in the valley of Virginia -- the Shenandoah Valley. It's incredible dramatic. For instance, how our country has changed. We agonize about those two civilians killed -- a Civil War 750,000 Americans died to determine the future of this country on those battlefields at Cedar Creek, at Fisher's Hill.

There were future American presidents, Hayes, McKinley. There was a former vice president on the confederate side Breckenridge. Can you imagine battlefield commanders becoming presidents today?

But even more so I write these books and make them accurate. They are entertaining, they're exciting to read. But we have taken history out the schools. We allowed the left to strip history -- serious history -- out of the schools.

O'REILLY: All right. The book is "Valley of the Shadow". Colonel thanks, as always appreciate it.