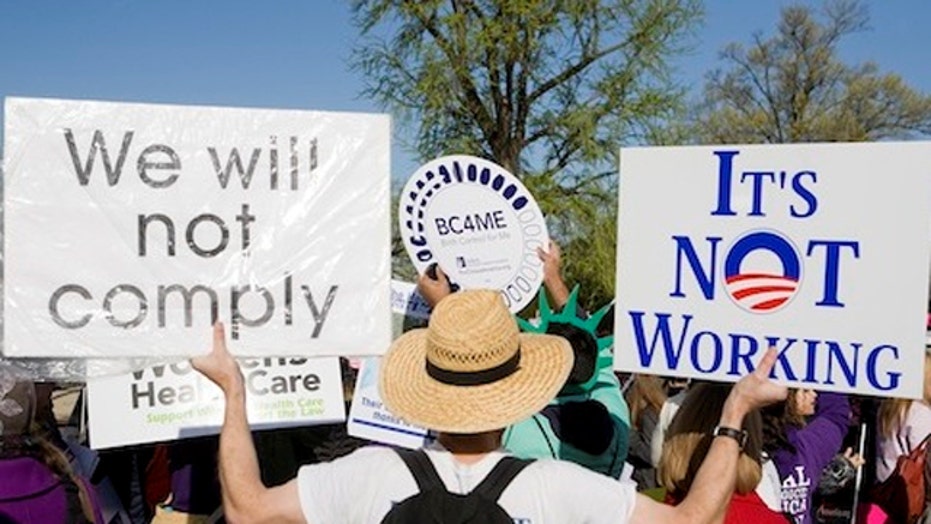 Is the Affordable Care Act affordable?

MICHELLE FIELDS: It's not affordable and we've been warning about this since 2010. The reason why it's not affordable is because you need lots of young people to sign up and they're not signing up, and you can't really blame them. Premiums for young adults are increasing in almost every single state, and we're not just talking about a few bucks. We are seeing triple-digit increases. If young people are not signing up-which they're not-there's no one to offset the costs. So we're seeing premiums spike for everyone else.

JONATHAN HOENIG: It's unaffordable for all of us. What makes something affordable, what makes and creates innovation, wealth creation, progress is man's mind. It's freedom, it's free trade, voluntary trade, self-interested trade in a free economy. But ObamaCare, of course, is exactly the opposite; it's force. From force only wealth destruction can follow. That's exactly what we're seeing with ObamaCare just a couple of months in.

JULIE ROGINSKY: In defense of this woman, first of all she got completely screwed by Washington state. There's no excuse for it. They gave her bad information I think not once but twice. Secondly, despite your gleeful demeanor, the fact that this woman is no longer getting health care. She didn't have it before, Eric, so she's no worse off now than she was before.

WAYNE ROGERS: This morning in the makeup chair I was talking to the lady who does makeup. Exactly the same thing has happened to her and she has priced out of the market because all of the thing that Affordable health care requires she doesn't need, and she's required to pay for that for someone else. She's 30 years old, it docks her income by about 20 percent by the time she's through. It's outrageous what this has done. Jonathan is right when he says this is a coercive act. It should be dismantled and they should start all over. They didn't know what they were doing; 28 pages of garbage. They hadn't the vaguest idea what was going to happen.

JONATHAN HOENIG: We told you so. We told you so for weeks, months. And as I told you so "hell no" this website is not safe. It's not a political pundit telling you that-it is the experts, the security experts. And you know the deal with companies every day on the internet-Amazon, Ebay, various types of banks-you feel safe with them; you trust them with your valuable data. But Obama's got a lot of nerve. He causes your health care plan to be cancelled and he sends you to a website that doesn't work, and if it does work even the security experts themselves say it isn't safe. This is central planning brought to health care. It's failing right in front of our eyes.

MICHELLE FIELDS: what this ObamaCare rollout has really done is it's sent a message to the American people and to every single computer hacker out there and that is the U.S. government does not know what in the world they're doing. Hackers are going to take advantage of that. They're not sitting at home twiddling their thumbs; they're going to take advantage of this. What makes me really angry is the U.S. government knew there were security risks with this website. There was a government report three days before the ObamaCare launch that detailed those risks, and the Obama administration decided to launch it.

JULIE ROGINSKY: The website was a debacle, the rollout was a debacle. I'm not going to excuse it. Anybody who does excuse it is completely drinking the Kool-Aid and should not be. There is no excuse for the debacle of the rollout of this website, to how it was handled, to the fact that it's still not working. I've said this before, for those of us who believed in the plan, and those of us who really wanted to see this succeed, for us now to have a gun in our faces thanks to the incompetence of the people in this administration-there's no excuse for it.

WAYNE ROGERS: The terrible part is this is the federal government inserting itself into the free market system, which is just stupid. I mean they are all a bunch of weenies, if you'll forgive the expression. We've got to get rid of it.

JULIE ROGINSKY: I would love to know exactly what the content is. Every time you put something in your mouth you really should know what's going in it. It's very important to know what ingredients are in there if you have allergies. This is important consumer information for people to have. What's wrong with that?

MICHELLE FIELDS: This is one of those rules that seem all nice and harmless, but it's expensive and unnecessary. There are already applications for your phones, and websites that already do this. The person who's going to end up paying for this is the consumer, because the business is going to have to spend thousands of dollars doing this, and the business is going to pass on that cost to consumers by raising prices. So it's all of us who end up losing.

JONATHAN HOENIG: why do businesses have to do it? Because they want to? Because customers want to? No, because Obama has a gun to their head. Again, ObamaCare is all about force. The irony here is that menu signage, according to study after study, including one recently from Carnegie-Melon, shows that it makes no difference on people's caloric intake. They don't eat less calories just because the menu shows them what it is. But, of course, the goal of ObamaCare wasn't about improving anything, it was about control-not just over people's health care, but also over retail establishments. That's the road to serfdom-we're on it.

WAYNE ROGERS: YOU CAN PROFIT WITH (NOAH) AS CHINA'S UPPER CLASS PROFITS