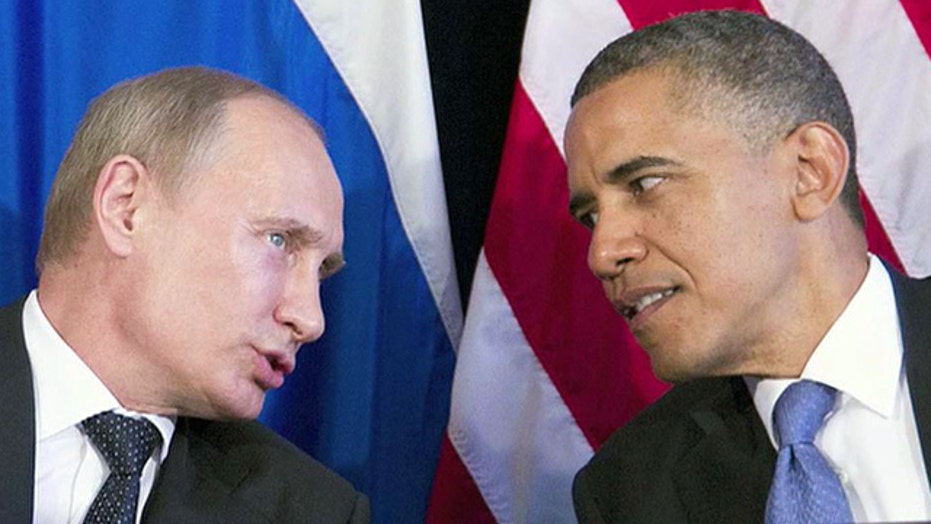 This is a rush transcript from "The Kelly File," April 15, 2014. This copy may not be in its final form and may be updated.

MEGYN KELLY, HOST: A breaking tonight -- new questions about the worsening crisis overseas and what it means for America's status in the world. Less than 24 hours after President Obama told Russia's Vladimir Putin in a tense phone call that Moscow faces further costs for its actions in the Ukraine, Russia warned that Ukraine is on the brink of civil war as Ukraine military and pro-Russian militants are battling for control. Things are going from bad to worse there.

The administration was challenged yesterday about whether President Obama's approach here is failing.

MAJOR GARRETT, CBS WHITE HOUSE CORRESPONDENT: Isn't there a sense in the administration and in European capitals in which you're collaborative dealing with, that what is going on is not working, that whatever signals you're sending, they're either not being heeded or misread and this entire approach which is to not escalate isn't working?

JAY CARNEY, WHITE HOUSE PRESS SECRETARY: No, Major, because the premise of the question is based on the notion that all the United States ever has to do when something happens in the world that we don't like is say stop it and they will stop.

KELLY: Joining me now, Rick Grenell. He's a former spokesman for four U.S. ambassadors to the United Nations and a Fox News contributor. Good to see you, Rick. So, the approach is not to escalate and yet, escalation is occurring. And so, Major Garrett pressing them on whether our approach is not working.

RICHARD GRENELL, FORMER SPOKESMAN TO U.S. AMBASSADORS TO U.N.: First of all, we have to say that we agree with the administration that we don't want this to escalate. It would be terrible escalate this.

GRENELL: And it's escalating. And that's a real serious problem because Russia and President Putin, they're just not listening to the United States.

GRENELL: We have this ability to pull a whole bunch of triggers and we're not pulling a lot of those triggers, because I believe that President Obama has this theory that either we go to war or we ignore the situation. He really politically doesn't wanna do either one and so, we're left with really basically nothing. I think that we can win an information war and what we should be launching here is a healthy debate throughout all of Eastern Europe to really think about capitalism and free markets.

KELLY: I know you say that Russia is playing us like a fiddle. What does that mean? How?

GRENELL: I think that what has happened is that President Putin has watched President Obama deal with Syria and Iran and Egypt even, I think you can go back all the way. And he sees that when there's a red line, when he sees that the administration says something, specifically when the president says there will be consequences for something, we don't really see consequences. We don't see a ratch getting up. So, President Putin is saying, you know, you can keep talking, or we're gonna keep acting.

KELLY: So, do you really believe then that he would not be doing this, Putin, if we had a different president in the White House?

GRENELL: I absolutely believe that. I think he would see that there is a consequence to our words. When President Bush said something, you knew actually that he meant it and that he was going to follow this up with action. And again, I wanna go back to say I agree with President Obama and the whole team. We don't want to escalate. But their strategy of trickling out some comments and then not following up with swift action.

Let's take for instance, he said on Monday if Russia continues there will be consequences. They continued immediately. We should have come out today and said we're ratcheting up the sanctions, not some travel sanctions on a couple of, you know, oligarchs. That's not what we're looking for. We're looking for some real action, and there are things that we can do. How about taking $20 million, and surge the information war in all of Eastern Europe. We should relish this debate. We can easily win this debate. When you put two types of life styles in front of someone in Eastern Europe, they are going to choose the one with more freedom, greater democracy, and capitalism. They are not going to choose the Russian way of life.

KELLY: That's interesting. Rick, good to see you. We will continue to follow it.